We’ve never been a huge fan of VR treadmills. For one, living in small apartments in New York City precludes their use. Much as I want locomotion in VR, I still want my couch, and there isn’t space for both.

But lots of people have room for a VR treadmill as the Kat Walk C Kickstarter project reveals. The company blew past its (modest?) $100,000 funding in three minutes (that’s not a typo). And then went on to raise over $1 million in the first 24 hours. And they still have 38 days to go.

Free-locomotion is one of the most vexing challenges for VR. It’s far more difficult than basic haptic feedback, which can be provided with gloves and a vest. Standalone HMDs like the Oculus Quest practically beg you to move around – you’re in a virtual world, after all. We sometimes lose sight of this when we design VR learning experiences in education. We so deeply associate learning with being still (sitting in a library, classroom, or even a collaborative space) that we forget VR should include movement and discovery.

If you want to incorporate motion where you’re actually using your feet and not teleporting around unrealistically or using a VR treadmill, you have relatively few options. One we’ve looked at previously – the innovative Tea for God virtual experience – deceives you with the illusion of infinite space. It’s fascinating, but it remains in the early development stage, almost a proof of concept. Download and try it out if you have Sidequest installed.

The other option is found in VR Experiences like the delightful Metamorphic at the Sundance Film Festival this year. You’re so focused on the other player and elements of the environment that it’s almost impossible to walk out of the virtual space. You could, and the real boundaries are there – but you’re so deeply engaged in the experience that you never notice them.

The best solution right now is actually quite simple: good immersive experience design. Make it so that the user doesn’t want to leave the central area of your space.

A VR Treadmill for the Home (and your VR Lab) 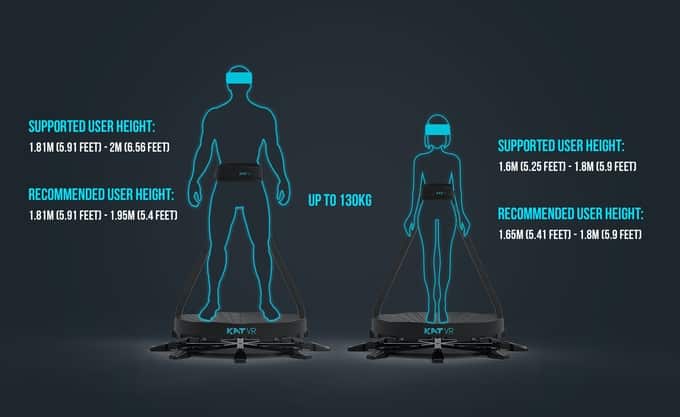 The Kat Walk C is a consumer VR treadmill, hardware designed for use in the home market. The original Kat Walk and other versions like the Omni by Virtuix use a full ring to hold you in place. They look and feel like professional gaming hardware, which you might find in a mall. The new model is a step in the right direction in that you are only held in place by a belt. Other than that, you’re free to move around and bend over to pick up objects. The gaming community is still the primary market here, but we’re getting closer to a device that could be used for a wide range of VR experiences.

On Kickstarter, $999 will get you a unit delivered to your door in October 2020. Multiple units come at a discount, which is likely targeted at VR arcades and labs. We do like that it comes in two different sizes. It’s about time the tech industry realized there are multiple body types.

The downside, of course, is that you’re still strapped in with something the size of a wrestling belt. And you have to wear special shoes for the concave surface to work effectively. As minimal as the device is, you’re still burdened down with hardware.

And our problem with XR today is that the hardware still looms too large. Technology is most effective when it disappears (AI search algorithms in Google and YouTube), or when it fits into the palm of your hand (your Smartphone) or other parts of your body (your Apple EarPods).

The Kat Walk C VR treadmill is a good interim solution, but it’s not the future of our XR experiences. Much more intriguing is Microsoft’s DreamWalker project, where you can literally walk around in the real world while inside an entirely different VR experience. And then there is Oculus, which has tantalizingly dangled before us the possibility of “arena-scale” VR for the Quest. At OC5, they demoed a virtual space of 33′ x 33′. When you get to that size, you could begin to explore the seabeds of the ocean or the streets of an ancient city without running into virtual boundaries at nearly every step.

It’s solutions like these – and not a VR treadmill – where immersive storytelling and the use of VR in the humanities will truly take off. But raising over $1 million in 24 hours tells you one thing – there is a huge pent-up demand to walk around in our virtual environments.

Keep that in mind as you plan out your next XR experience.