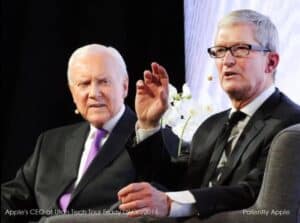 If you think the future is AR, you have Tim Cook on your side. Whenever the CEO of Apple speaks, he pulls back the curtain just a little more on Apple’s vision. Apple has already hinted at its plans through patent filings and acquisitions. In 2015, it acquired one of the leading augmented reality (AR) software companies, Metaio. In the NYC Meetup community, Metaio stood out from the crowd – innovative projects, incredibly smart people, and a focus on consumer generated content.

Apple’s augmented reality will most definitely be mobile-centric. As he has done before, he knocked virtual reality for its isolating quality. We disagree and think VR will be highly social in the future. Facebook is working on social VR with their VR Testbed demos at the F8 event. And Google is experimenting in the social VR space (see the end of this article).

But there are technical challenges. We will have cable-free headsets for AR long before we get to mobile VR headsets that let us interact with others. For Cook, the fact that we are social beings – “Even introverts are social people” – rules all else. And while interacting with simple avatars in an enclosed headset may be a novel experience, it’s not really what we mean by social.

Tim Cook: the future is AR

Here is part of the transcript from Business Insider with Cook’s comments on AR. Someday, it will be as essential as our Smartphones are now. The full video is below.

I do think that a significant portion of the population of developed countries, and eventually all countries, will have AR experiences every day, almost like eating three meals a day, it will become that much a part of you, a lot of us live on our smartphones, the iPhone, I hope, is very important for everyone, so AR will become really big. VR I think is not going to be that big, compared to AR. I’m not saying it’s not important, it is important.

“I’m excited about VR from an education point of view, I think it can be really big for education, I think it can be very big for games. But I can’t imagine everyone in here getting in an enclosed VR experience while you’re sitting in here with me. But I could imagine everyone in here in an AR experience right now, if the technology was there, which it’s not today. How long will it take?

“AR is going to take a while, because there are some really hard technology challenges there. But it will happen, it will happen in a big way, and we will wonder when it does, how we ever lived without it. Like we wonder how we lived without our phone today.

Here is the twenty-six minute interview with Cook. The section on augmented and virtual reality begins around 18:30.

This is far more than we usually get from Apple. And as it is the early morning of October 4th, it’s time to refocus on Google’s upcoming announcements. As Ars technica put it, it will be the coming out party for the new Google Hardware division. If you are impatient, all the rumors are here. It promises to be an interesting day, in what has been a fascinating year for augmented and virtual reality developments.

The future is AR. Or is it? Google, your move.