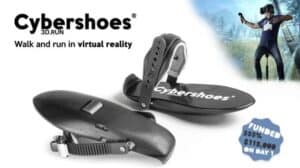 The Cybershoes VR peripheral is an intriguing virtual reality enhancement at CES 2019. A device you strap on your shoes (one size fits all) and off you go. At least, virtually. You can walk, run, jump – basically cover lots of ground while never leaving your chair.

Sounds like a gamer’s paradise. But don’t write it off so fast.

As our virtual worlds expand, there is a definite need for a device that lets you move around without bumping into walls or tripping over your coffee table. VR may undermine the boundaries of space and time, but the real world is still there. And in fact, reality is more limiting than ever when you have a device strapped over your eyes.

No surprise then that the Cybershoes VR project blew through its Kickstarter goal in two hours. There are a few similar projects around, though the most promising, Google’s VR shoe patent is likely not close to production.

The Vienna-based company has been showing off its virtual shoes at the Tokyo Game Show, E3 and other venues in late 2018. This week, they’re generating a lot of press at CES 2019. Here’s a quick video of how they work.

They’re incredibly versatile. You can walk, move backward, run, jump – most anything you can do in real life. Without ever leaving the confines of your chair. With many Steam Games already supporting free locomotion, there’s no need to wait for developers to get on board.

That’s refreshing as we’ve been getting weary of “developer editions” of VR and AR devices. Work with your developers before you go public to give us something we can use.

Even better, they promise support for Oculus Quest, Facebook’s new standalone, 6DOF VR headset that will arrive this spring. If any HMD needs something like Cybershoes, it’s the Oculus Quest.

You might see Cybershoes as the VR treadmill experience without the high cost, space issues, and awkwardness of being strapped into something the size of gym equipment. They’ll definitely be helpful for education and enterprise users that want movement without a lot of expensive hardware.

As Road to VR noted back in October, they’re not the perfect solution but at $300, they are “space-saving locomotion controllers.”

In short, there’s a lot to like here if you want to do more than watch 360° videos in watered-down versions of virtual reality.

So what are the downsides? 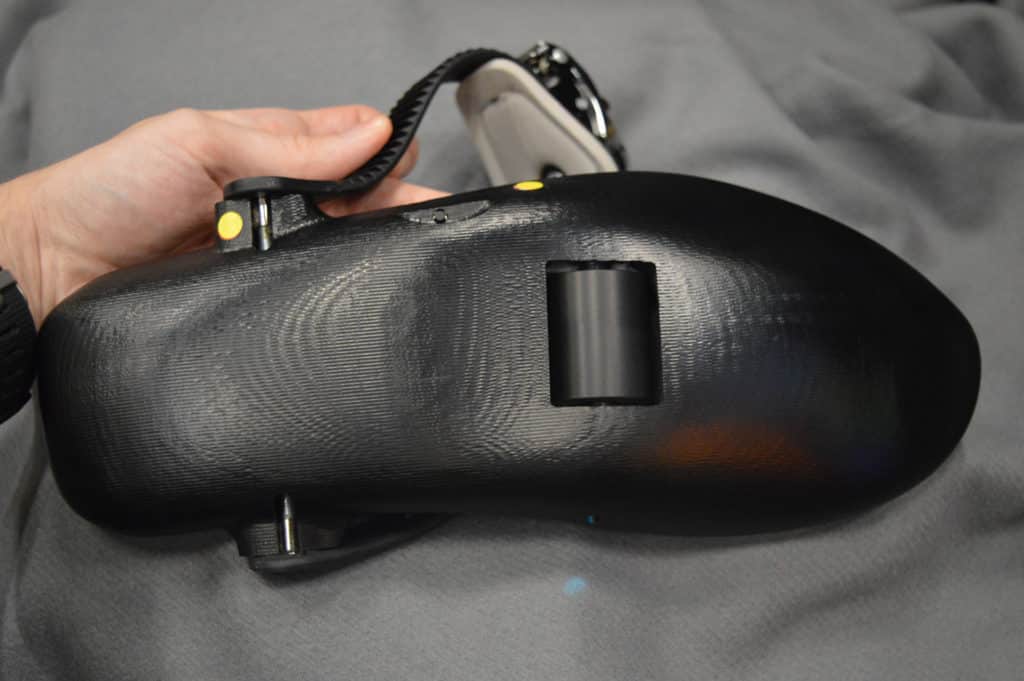 Looking at the bottom of the Cybershoes VR peripheral, you can see one problem already. There’s a mechanical component, not just electronics. The roller is designed to work on carpet, not hard floors. And they specify that the carpet should be not too thin or too thick. (We can already envision future ads for home furnishing stores – “Our carpets are VR compatible!”). There’s another issue with a roller device – dog and cat hair can become a problem.

And there’s one accident waiting to happen – getting caught up in a game and standing up. With these bad boys, you’ll probably do a faceplant – especially if you’re wearing a headset.

To take full advantage of the shoes, you need a chair or stool that rotates around its axis. But that’s not a disadvantage as you should have that even for seated VR experiences.

Cybershoes are one of those devices we’re simultaneously attracted to and recoil from. There’s a real need for a locomotion solution in VR. We can vouch for the fact that cramped New York City apartments were not designed for VR experiences. 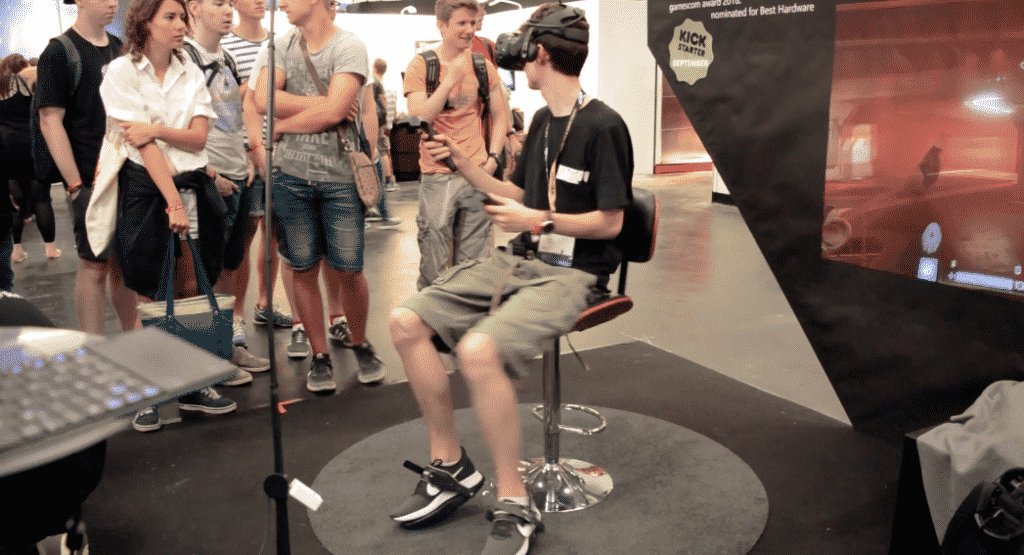 But we also like physically moving around in VR – not sitting on a stool or in a chair. Even if Cybershoes VR provides the effective illusion of movement, it’s not that real when you can feel your backside resting on something.

The visceral quality of virtual reality is the opposite of what Cybershoes sets out to do. There are many times in VR when you want to physically walk around, kneel, or reach up to touch something. That’s what is so deeply compelling about immersive experiences. In that respect, the device offers no real advantage and could hinder your experience.

Think about a standard “walk the plank” experience when you are actually standing as opposed to wearing this device and resting on a stool. There’s simply no comparison.

It’s a fascinating solution that will dramatically enhance virtual gaming (and maybe help some burn a few more calories). But when it comes to fully immersive VR experiences, we’re left wanting for something more.