There’s enough challenges in using VR but a primary one can be lack of space. And it’s a problem that Google looks to solve in patenting a pair of VR shoes. Even if you have a large VR lab or entertainment area at home, it never seems like you have enough room.

Jumping or mysteriously teleporting from one location to another just isn’t the same – it breaks the illusion of presence.

An ingenious solution for VR Shoes

The patent — titled “Augmented and/or Virtual Reality Footwear” — describes a motorized shoe that can detect when you are running out of space to walk, activating a mechanism that will allow you to take a step in the virtual world without actually advancing in the real world (and smacking your face against a bookshelf).

The shoes, the patent abstract describes, “allow the user to walk, seemingly endlessly in the virtual environment, while remaining within a defined physical space in the physical environment.” In other words, you will think you are walking for real but, from the outside, you will look like Michael Jackson moonwalking.

So while you might look a little funny to an observer, you’ll never have to worry about that bookshelf or desk on the other side of the room. The most interesting aspect is that the motorized function only kicks in when you get close to an object.

And that leads to an interesting question. Is Google working on a new VR headset with inside-out tracking? Microsoft, HTC, and Facebook have all gone this route while Google remains glaringly absent. It’s an untenable position if they want to be a major player in the VR space. 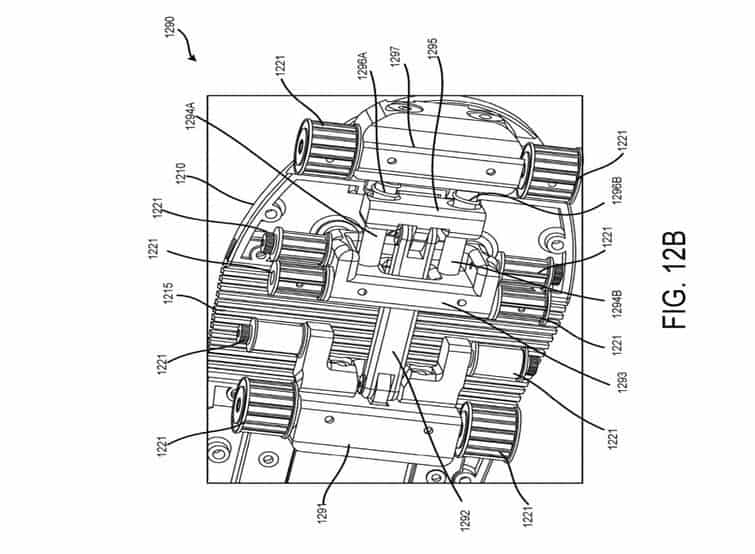 Having the motorized function kick in when you get near an obstacle means there has to be some form of environmental scanning. And that will most likely have to come from a headset. And when your HMD connects to your shoes, it sets up another potential point of failure.

But there is no other option short of using separate base stations. And that solution is getting sidelined to those with first generation Rift or Vive and the large-scale location-based VR installations like The Void.

And there is another problem. Since the shoes are motorized, there’s the ever-present power issue. Like your headset and hand controllers, they’re going to need recharging. More batteries or more cables. It never ends.

Simulating movement in virtual reality is a wide open area with no obvious solution. In fact, Tom’s Hardware has a very helpful overview of 19 Ways You Walk and Run in VR Games. We definitely recommend it if you are working on a VR project that incorporates movement.

But almost all of those 19 ways are developer tricks. They’re useful in deceiving you into a sensation of locomotion, but your legs and feet are not moving. And that’s something that Google’s VR shoes attempt to solve.

Perhaps the most well-known motion simulator is the Omni-directional VR treadmill by Virtuix. It actually does give you a sense of motion, though you have to be strapped into it and you’re not going to set it up in a small apartment or lab.

Over 3,000 have been installed so far, but they seem best suited for public entertainment venues. From watching others use it, our sense is that gamers take to it immediately. The general public, less so.

From our own experience, the concave base design makes it feel somewhat awkward. We are deeply sensitive to the position of our feet – especially when we’re wearing an HMD and can’t see them. A quick experiment to see what we mean – close your eyes and take a step.

There are other solutions like the WizDish ROVR, which copies the Virtuix treadmill. But you’re still sliding on a base to create a semblance of walking. And check out an earlier version of the WizDish five years ago – truly, truly painful. A future generation will shake their heads at what we put up with to achieve a sense of immersion.

Sort of like buying a car before paved roads came along.

In the end, the goal is natural movement. The kind that you have with the Oculus Quest headset. But that requires massive amounts of space similar to what Facebook provided at its OC5 demo arena. Doing VR in labs and at home will ultimately depend on a solution that offers the illusion of walking when we’re not.

Google’s VR shoes is only a patent so it may never see the light of day. But it’s an intriguing solution to a longstanding problem in virtual reality – translating our natural experience into the virtual. It’s fascinating how the simplest of human actions – walking or picking up an object – can present such challenges in the virtual world.

Slip-sliding along on our concave bases or motorized shoes, we’ll get there someday.