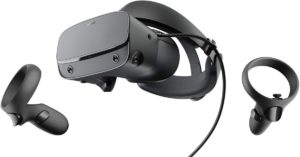 Every technology advance results in something being taken the trash bin. With the announcement of a new Oculus Quest 2 at Facebook Connect, the victim this time is the Oculus Rift S. Facebook will discontinue the headset in Spring 2021 and close out its work in PC-only HMDs. It’s a remarkable development when you consider that only a few short years ago, we were struggling to get VR headsets to work when they were connected to a PC. The Oculus Go was a significant breakthrough, but of course, limited to 360 video.

It was clear with Quest 2 that the Rift would go. Indeed, event at last year’s OC6, people wondered if Facebook had already sealed its fate – along with the Oculus Go – with the release of the original Oculus Quest.

You almost feel bad for the poor Rift S. It didn’t even warrant its own announcement of its demise. The news was embedded in the Oculus Quest 2 release, almost like an afterthought:

We’re going to focus on standalone VR headsets moving forward. We’ll no longer pursue PC-only hardware, with sales of Rift S ending in 2021. That said, the Rift Platform isn’t going anywhere. In fact, we’ve seen significant growth in PC VR via Oculus Link, and the Rift Platform will continue to grow while offering high-end PC VR experiences like Lone Echo II and Medal of Honor: Above and Beyond well into the future.

If you recently bought a Rift, you’ll still have plenty of time to use it as there was no end-of-support date announced. And you can take solace from Steam’s Hardware & Software Survey that the Rift S accounted for 23.02% of the headsets on Steam in August (and actually increased by 1.22% that month).

While it won’t please everyone in the VR gaming community, it makes sense for Facebook to throw its weight behind standalone VR. The original Quest may not have been the best HMD, but it was just what the mass market wanted – an inexpensive, easy-to-use VR headset, with a passable display and no base stations to wrestle with. With the significant upgrades coming in the Quest 2, there’s simply no reason to keep the Rift around. Tethered VR will still be available via the Oculus Link cable, though even that has a limited future once a wireless Link is worked out.

Will there still be PC-based VR? Yes, but only for high-end applications. The rest of the XR industry will have no choice but to follow Facebook in this regard. There will still be companies making advanced headsets, but they’ll be for specialized use in design, engineering, and medical training in university/industry labs and research centers. As long as you have an excellent standalone unit with the option to plug it into a PC, why make a device that can’t run unless it’s tethered to a computer?

Better for the Market – and Education

Commenting on the demise of the Oculus Rift S, a Facebook spokesperson told Tom’s Hardware,

All of this is also good for the entire ecosystem because a bigger audience means stronger opportunities for developers to build sustainable businesses on the platform.

And indeed, it will be a boon to developers as there will be a single platform to focus on. And that will expand the use of VR in education since there will no longer be a question of which Oculus HMD to support. The only question is whether or not to go with Facebook’s VR platform or another one. One suspects that as with our Smartphones, the entire XR ecosystem will coalesce around a few major platforms. It’s great to have a market that offers a wider variety, but it increases the cost of content production.

So what about Google? They’re rumored to be working on their own AR glasses and they helped spur the consumer VR revolution. There may be room for a third XR platform, but so far, all we’ve heard is silence from Mountainview.

We confess we never bought the Oculus Rift S as we had a feeling standalone VR is the future. Indeed, even the HTC Vives we acquired become not much more than expensive paperweights once the Quest could be used with the Oculus Link cable. Except for specialized use cases outside the consumer market, PC-only VR has reached a dead-end.

We always knew we would write that line someday, but a little surprised that we’re doing it so soon.