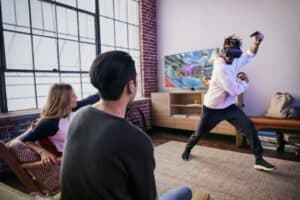 It’s been out less than a year (debuting May 21, 2019), but it’s good to see the popular Oculus Quest back in stock. Both the Rift S and the Oculus Quest VR headsets have been almost impossible to come by (unless you were willing to spring for over a 100% markup).

Even with the return, the Rift S remains unavailable in many countries. And the Quest will show up first to Australia and Europe before reaching the U.S. markets during the last week in May.

While Oculus never made clear the reason for the spring 2020 delays, it was most likely popularity over the holiday season compounded by the Coronavirus disrupting production and supply chains.

Oculus Quest Back in Stock

The Quest’s availability in late April quickly disappeared under a rush of orders. It’s now available in most regions but both the Quest and Rift S quickly go to a two week or more backorder whenever they show up on the Oculus site. Here’s the latest chart from RoadtoVR updated to July 15, 2020: 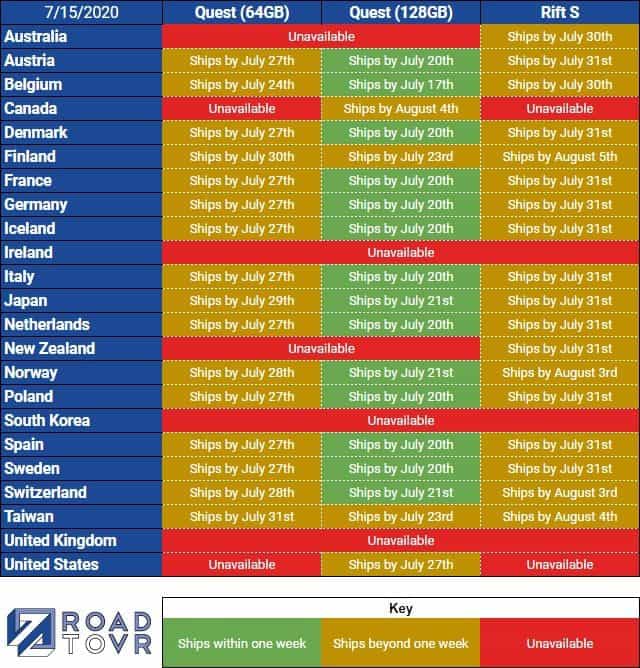 The Rift S remains scarce and will not be available in the U.S. The Quest is not shipping in the U.S. until the end of June and we wouldn’t be surprised to see further delays.

Should You Buy a Quest Now?

Should you run to Oculus and pick up the popular headset? It’s not necessary if you already have a Vive or the Rift. You might want to wait for version 2, which now appears to be coming this fall. Oculus was hinting that the Quest had a bright future at the OC6 conference last fall. Given its popularity and Facebook’s move toward standalone HMDs, it’s due for an update.

Facebook has continued to innovate on the Quest platform, and it’s our VR headset of choice. As UpLoadVR noted, Facebook has pushed out several improvements in the fall and early spring:

If you just want to experience the future of VR in a standalone, untethered headset, this is the HMD to have. Increasingly, VR experiences such as Within’s Supernatural exercise app are taking advantage of that freedom of movement. And with the Oculus Link cable, you’ll still be able to do high-end experiences (as long as you’re willing to tolerate a bit of a screen door effect).

If you don’t have a decent VR headset, this is the perfect time to get the Quest. Especially since it now seems we’ll be impacted by the Coronavirus throughout the summer and possibly the fall.

With the Oculus Quest back in stock, you might just find it a little easier to survive our new quarantined lifestyles. Even once the pandemic is over, we’re not going back to the way things were. We’re facing a “new normal” and the Quest is the perfect headset to have for education, the arts, 360 videos, and for high-end experiences.

Keep an eye on the Oculus site if you’re looking to get one, as its available seems to change almost daily.