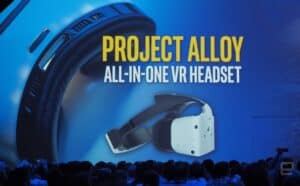 Intel plunged into the virtual reality space yesterday with the unveiling of a new VR headset at IDF16, the Intel Developer Forum. It’s a wireless VR headset without cables, without hand controllers, and perhaps most amazing, it recognizes your surroundings.

Packed with sensors, this all works thanks to Intel’s RealSense 3D cameras which are actually three cameras in one — a 1080p HD camera, an infrared camera, and an infrared laser projector. They “see” like the human eye to sense depth and track human motion. Combined with a VR headset, it opens the door to a much more natural, intuitive and immersive experience. And Intel came up with a new name for the experience – Merged Reality.

Merged reality will be one of those fundamental shifts that is going to redefine how we work, how we are entertain and how we communicate.

With AR, VR and Mixed Reality already in play, we were just longing for another concept to describe our virtual environment. In truth, this term may actually make sense. But it certainly won’t be the last attempt to explain our rapidly advancing virtual future.

So What is Project Alloy?

The few videos that surfaced from the keynote show what Project Alloy is all about. As you might imagine, the official Intel video is a polished production. It’s a jaw-dropping, Matrix-like experience of what our virtual world may look like.

In Intel’s concept of merged reality, you no longer need an empty room to do VR. Project Alloy will make sure you do not trip over your coffee table or desk. You walk around without a cable, you pick up virtual objects with your hands and virtual beings react to you. In a word, it’s impressive.

Krzanich has a post on Medium describing the five advances incorporated into Project Alloy:

More Natural Manipulation. Merged reality is about more natural ways of interacting with and manipulating virtual environments — by liberating you from the controllers and the nun chucks of today’s VR systems by immersing your hands — your real-life hands — into your simulated experiences thanks to readily available new sensing technologies.

Digitized Real-World Content. This is a game changer for the entire category of virtual and augmented reality. You choose the experience, and you get to navigate real-world content in new ways.

Does any of this sound familiar? It should as just about every tech player in the VR, AR and mixed reality space has been working on these issues. At SXSW 2015, Palmer Luckey said the Holy Grail of virtual reality was the ability to use our hands. But Intel is way beyond the solution offered by Oculus. The RealSense cameras and sensors make hand controllers pointless. Now you can interact with your virtual environment naturally, holding and reshaping objects. Intel has broken through the boundaries of interactivity and play in VR, opening up a new space where reality is completely malleable.

This is a realm apart from any of the current virtual reality solutions coming to the market. No one has packed all these features into a single VR headset.

So Where is Project Alloy Today?

The live demo at IDF16 was not quite as polished as the promo video – there’s clearly still work to be done. But the freedom of movement, the lack of hand controllers and interactivity were on display. By the way, while Intel’s headset is untethered, a cable was used during the demo to do the video feed for the audience.

Here’s the new VR headset on stage at IDF16 – it’s unlike any VR demo you’ve seen.

Project Alloy will not be available until 2017 – and then only for developers. So don’t expect to see it on the market until 2018 at the earliest. And yesterday’s demo, remarkable as it is, raised as many questions as answers. How are the real and virtual integrated? Is there social VR here? How good can the video resolution be on a wireless device?

But for the moment, imagine the possibilities. For everything from business to entertainment and education. A merged reality device negates the need for VR labs and attendants to help you move around. It runs off it’s own battery so power is not an issue. Like our smartphones, it becomes an anywhere, anytime kind of device. Which means that the potential uses are bounded only our imagination and the yet to be known limits of the technology.

If Intel proved one thing today, it’s that virtual reality is an incredible vortex of new developments. And Intel may have just pushed VR in a whole new direction. Let us know what you think; we’ll be following these developments closely.

Welcome to our Merged Reality future. 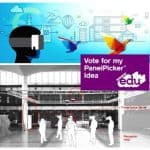 Vote for our SXSWedu VR and Learning Pro 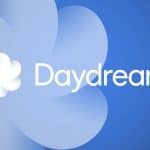