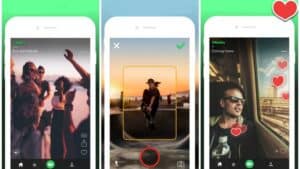 Take a look at the Splash VR app for iOS which is making news at SXSW Interactive. Combining VR and social media, it won the top prize at SXSW’s startup accelerator in the VR category. The app was developed by Viorama which picked up funds last year in the European Pioneers startup program, which is funded by the European Union.

If anything will kickstart virtual reality, it would be linking it to social networking. Not that VR needs any push at all with the recent onrush of excitement.

So what exactly is Splash? Mashable calls it a mashup of Periscope and Snapchat. It creates instantly shareable immersive images and video.

It’s similar to the 360 photo panorama apps (which we use regularly) though the images have something of a disjointed quality. While you’re doing the images, you can also record parts of a scene as video. The finished clip gets uploaded to Facebook or Splash’s own platform.

It makes for an odd mashup of an immersive still scene with moving images. As if Constructivist painting met video art.

Mashable described it as follows,

The results can vary from impressively immersive to wildly abstract depending on how you shoot (you can overlay multiple clips shot at different times on top of one another, for instance.) But Splash cofounder Michael Ronen says that flexibility — allowing people to create an “emotional landscape” — is the whole point.

Cofounder Michael Ronen, who has a decade of work in theater and film in Berlin, said

Snapchat invented a new social dynamic that is hitting on the millennial teenagers concept of being: it’s the here and now, it’s almost zen philosophy. . . Where we are aiming is to create a visual communication platform in VR that can be between your friends but it can also open up to people you don’t know, and that’s what virtual reality can do.”

We’re not sure whether millennials will love this or ignore it. Both Periscope and Meerkat have notched a place in the social media sphere, but they are nowhere close to apps like Instagram and SnapChat. And if you recall, Meerkat was all the rage at SXSW Interactive in 2015. Now it’s one-tenth the size of Periscope.

Combining virtual reality and social media is fascinating idea. Splash will surely not be the only VR app to try and leverage the power of social networking. Maybe we’ll need to wait for better phones, but something will happen in this space.

If you’re interested, the app is available for iOS and it only takes a few seconds to set up.