Samsung’s in-house tech initiative, C-Lab, has announced new VR and AR products for everyday life. Last year, Samsung offered a strap that turned your fingertip into an I-Spy like phone earpiece and a belt that tracked your waistline (which made a Fitbit look completely passive).

Now Samsung is focusing on new VR and AR products that seem more likely to hit the market. While we love the cutting-edge stuff – Intel’s Project Alloy or Microsoft’s HoloLens demos of holographic teleportation – it’s the everyday products that will help popularize VR and AR. And expand virtual and augmented reality into education, entertainment and retail.

Here’s what Samsung’s C-Lab has in the works:

Relúmĭno is a visual aid device that works with the Gear VR headset:

It works as a mobile app that when inserted into the Samsung Gear VR can enhance visuals and text so that they can be enjoyed in better quality. The technology even has the ability to remap blind spots by displacing images and uses an Amlser grid chart to correct distorted images caused by metamorphopsia. Relúmĭno enables visually challenged people to watch TV without using the expensive visual aids currently available in the market.

In our VR education workshops, the question of access for the visually impaired increasingly comes up. Relúmĭno is hardly a full solution but it’s a step toward addressing some of the accessibility issues. 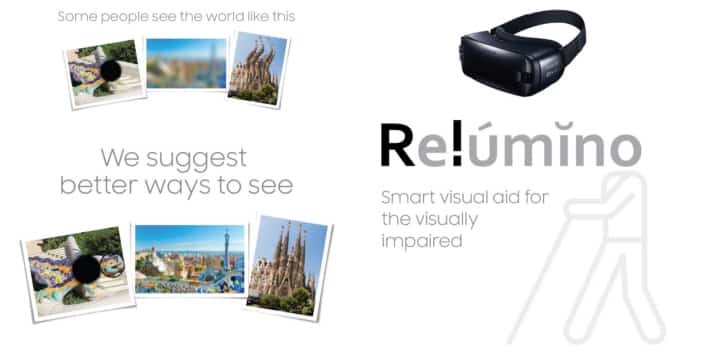 Monitorless tackles the lack of content in the VR and AR by letting you play media from other devices like your Smartphone. It’s clearly an interim solution but a way of sidestepping the weight issue of having a battery and processor resting on your nose. We’ve always thought the smartphone as a pocket computer for VR may be the best solution until the tech shrinks down.

Monitorless is a remote-control VR/AR solution that enables consumers to use devices such as smartphones and PCs without a monitor. The solution consists of a special pair of glasses that resemble regular sunglasses. They are used to view content from other devices such as smartphones and PCs and can be used for both Augmented Reality (AR) and Virtual Reality functionality thanks to the electro chromic glass featured on the glasses.

Forget those pricy Bose noise-cancelling headphones. You could see people wearing these while flying and in other activities.

VuildUs is not far afield from what Ikea and others retailers are doing in the AR to sell home furnishing. But Samsung’s AR camera is fascinating. If this device gets to market, you’re going to see students and others hacking it to create far more interesting projects than where to put that new couch. Here’s the description and video:

VuildUs is a home interior and furnishing solution enables users to see what a new furniture purchase would look like and whether it would fit in the room before they buy it. It consists of a 360-degree depth camera and a mobile app for VR compatible devices. First, users connect both devices and scan their home using the camera. That data is used to build a VR version of the user’s home which the user can then enter when wearing a VR headset. They can view items of furniture in 3D, and buy it on the spot if they like how it looks in the room.

TraVRer is also something you’ve seen before – 360 videos to promote tourism. But this comes with a twist – you can switch between time of day and directions without navigating menus.

traVRer is a 360-degree video platform that enables users to experience realistic virtual travel before and after a real-life trip. Those using the platform are able to visit landmarks and famous places around the world but with the mood, noises and events captured. Users can switch seamlessly between different videos to go in different directions or see the place at a specific time of day – all without the need to navigate menus for alternative video options.

Samsung isn’t taking huge risks with these projects. The first two address issues content and accessibility issues in VR and AR. The last two offer new ways of creating or navigating virtual spaces. These four innovations will bring us another step closer to living in a virtual world. You’ll find them at the Mobile World Congress show in Barcelona at the end of this month. 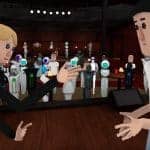 AltSpaceVR Expands – Will Have Cro