As we reach the end of the year, it’s time to look back on our top ten VR and AR articles for 2018. We’ve wrapped up an incredible year of writing, travel, podcasts, and speaking engagements. And we’re looking forward to the coming developments in virtual and augmented reality in 2019.

In addition to our writing on Digital Bodies, we wrapped the Immersive Learning Series in the EDUCAUSE Review with the article, “From VR AR to our XR Future in Education.” We hope you enjoyed the series!

Time is the most precious gift we have, and we thank you for sharing some of your time with us! 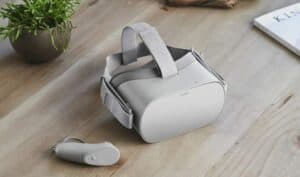 The Oculus Go is a breakthrough HMD, even if it only provides three degrees of freedom (3DOF). But an ingenious hack from Antilatency turned it into a 6DOF HMD. It’s an early forerunner of what we’ll get with the Oculus Quest in Spring 2019. We see a future where base-stations and sensors will only be found in high-end VR labs and entertainment facilities. At home, we’ll be delighted with standalone units that scan our rooms with internal sensors. It’s time we make VR easy.

An awesome demo of the Oculus Go VR headset with 6DOF

The market was shifting throughout the year – or maybe it was just the estimates of what the demand would be. But even if we’ve entered a quiet period in late 2018, the longterm projections for virtual reality still see massive growth. We’ll have an update on this shortly in 2019. 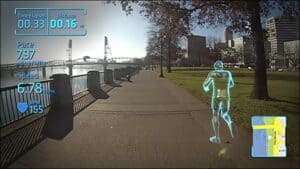 Sometimes the best insights don’t come from a single experience or device. It’s from the wisdom of a (very smart) crowd. Here are ten quotes on AR from the past couple of years that readily stand the test of time.

Augmented reality is just getting underway, and we expect to see Apple unleash their device by 2020. Don’t let the delays in product development lower your expectations. 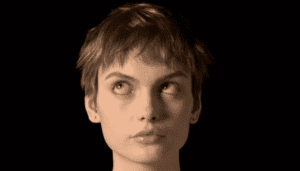 Mica, we love you. Or so we think. Actually, you’re unnerving us with an uncanny ability to mimic human qualities.

Mica is the AI Mixed Realty project that arrived with the new Magic Leap goggles. While she doesn’t talk (yet), she is – to borrow a line from the German philosopher Nietzsche – human, all-too-human.

Say hello to a future world of life-like avatars in our immersive ennvironments. And prepare to step into a world of profound ethical challenges. 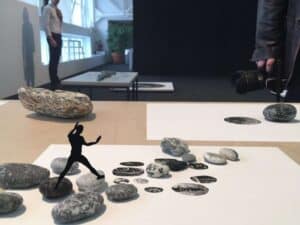 The public discussion of augmented reality focuses on its future potential in education and the workplace. But it ignores the amazing work already done by contemporary artists. This year, we explored the Mirages and Miracles exhibition by the digital artists Adrien M & Claire B.

Simply put, it blows open the possibilities in artistic creativity and engagement with an audience.

We wrote a number of articles on the upcoming developments in VR headsets, but it was one on future lenses that made the list of our top ten VR and AR articles for 2018. Metalenses, which use nanostructures to focus light, could end up being as thin as a human hair.

Do you want VR in your contact lenses? With further development, this could be the solution. Someday, we’re going to laugh at the bulky headsets we currently use.

A breakthrough in lenses for VR and AR headsets? 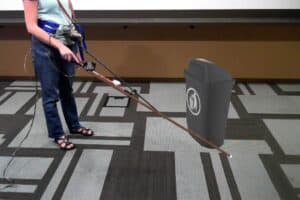 Whenever we do a talk or workshop, the issue of accessibility comes up. And we’ve been following the developments since Digital Bodies took off back in 2015. A couple of projects intrigued us – and you! – this year. We examined Google’s work on distance perception using spatial-audio clues and the Microsoft “Canetroller” project. Both hold promise for addressing accessibility issues in virtual environments.

That said, the technical developments here are starting points, not solutions. It’s up to all of us to demand that the issue is taken seriously. It was good to see that this article made it into our top ten VR and AR articles for 2018.

Accessibility in VR for the visually impaired 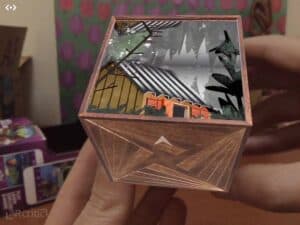 The Merge Cube caught our eye when it first appeared. But lacking good content, the square piece of foam that serves as a basis for AR experiences ended up gathering dust on a shelf.

And then along came Mighty Coconut, an Austin, Texas content studio that created an interactive AR story for the Merge Cube. The Cube, an App, and your Smartphone are all you need to dive into a fascinating interactive AR story. A story where your choices have consequences.

Every time we bring this to workshops for K-12 schools, the kids won’t let it go. It’s that compelling and reveals what we could do with more complex forms of AR storytelling.

57° North – an interactive AR storybook for the Merge Cube

Virtual reality has already made remarkable strides in healthcare education and delivery. But the most significant success so far is its use for Exposure Therapy. The University of Southern California has a long-running and very successful program using virtual reality to treat PTSD. Bravemind is in use at over a 100 VA hospitals and military bases.

But now startups are beginning to use VR for therapy with low-cost HMDs. It could dramatically transform mental health care. And with the incorporation of Social VR and AI in the next 2-3 years, it could raise serious ethical issues.

Today news reporters have to justify their existence. Tomorrow, your therapist may be in the same boat. Are we ready for amateur therapists wielding VR headsets?

The future of storytelling 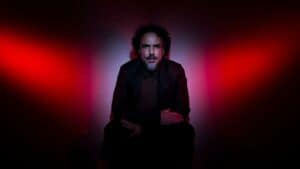 Rounding out our top ten VR and AR articles for 2018 was an amazing VR experience. The Mexican film director Alejandro G. Iñárritu was behind the three-part immersive installation, CARNE y ARENA (Virtually present, Physically invisible). It initially opened at the Los Angeles County Museum of Art and in Mexico City. In fall 2018, it came to Washington, DC where we had the opportunity to experience it.

Incorporating an on-site installation work, a VR experience, and the use of flat screen videos, it is a piercing exploration of what it’s like to cross the border as a migrant. And it’s a bold experiment by a Hollywood filmmaker willing to take risks with a new media. For us, it embodies the deep potential of immersive storytelling.

As always, we thank you for joining us on this journey. We promise a lot more to come in 2019!

If you celebrate the holiday, have a safe and healthy New Year’s Eve wherever you may be. Best wishes for the New Year!