Microsoft’s Build 2019 conference got underway today with announcements, surprises and one major HoloLens demo fail. There are lessons here for all of us working in VR and Mixed Reality, and you have to applaud Microsoft for trying. Even if, on occasion, things go dreadfully wrong. It’s a risk we all take when demoing emerging technologies. 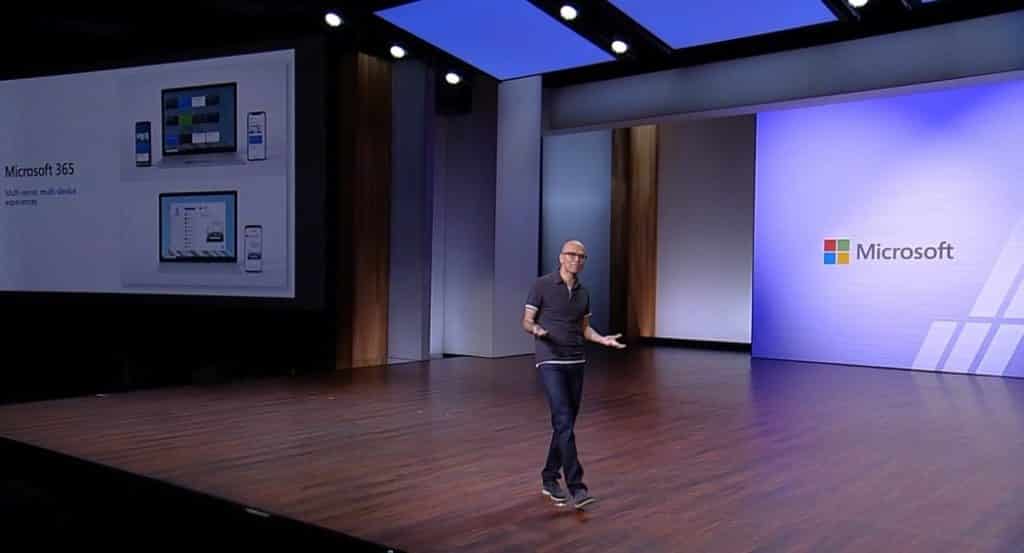 We’ll get to that HoloLens demo fail in a moment. Microsoft offered a number of surprises as the three-day event got underway. They will be working with Google on their Edge browser – which will also be available for Mac. They’re continuing to expand their work with the Linux developer community, offering a full Linux kernel for Windows 10. Finally, we saw demos of a more conversational Cortana, and a new Minecraft AR game for your phone.

The Minecraft AR experience is fascinating, but let’s back up a minute. The Cortana news is what really intrigued us. And not because we’ve been feeling especially lonely around their – or anyone else’s – digital assistant. As The Verge noted, this is a shift in focus for AI.

Microsoft acquired Semantic Machines last year, and in combination with Microsoft researchers, it’s building conversational AI that will combine skills and context to let digital assistants like Cortana actually do the things you ask them to do.

Not surprisingly, the crowd in Redmond are focusing on business use cases. But we see a more fundamental move that will transform the use of AI. Microsoft has moved Cortana from its AI Research Division into its Experiences and Devices team. This is critical for developing AI-driven avatars in virtual environments down the road. AI is rapidly advancing in its ability to provide answers, recommendations, and complete a range of other tasks. But its real power will come when we engage with it conversationally, especially when we interact with it as we do with other human beings.

It’s in the unintended consequences where AI gets interesting. And a little unsettling.

We’ve already seen hints of how powerful interactive AI can be in when it is embedded in virtual experiences. Fable’s Wolves in the Walls and Magic Leap’s Mica who has yet to utter a sound (in public, at least) move in this direction. This is where the virtual becomes real, erasing the boundaries of reality as we know it.

Interactive AI in virtual environments will create incredible opportunities for learning and professional development. And it will open a Pandora’s Box of ethical challenges as we plunge into a world where avatars may or may not be representing actual humans.

Today, we anguish over fake news. Tomorrow, our concern will shift to fake humans. We’ll give you a minute to ask yourself if you’re ready for that. What about your students? Your customers? Your organization?

Still with us? Good.

But the real tech surprise at Build 2019 was precisely what Microsoft didn’t want to see – a complete HoloLens demo fail. Gizmodo described the painful few minutes, which seem like hours if you’re the one on stage.

To kick things off, John Knoll, the chief creative officer at Industrial Light and Magic, and Andy Chaikin, a space historian and author, took the stage wearing HoloLens 2 headsets. They rattled off some prepared lines about showing us the power of the Unreal Engine and HoloLens 2 to recreate the Apollo 11 moon landing. What followed was a fancy galactic background, some cosmic space whale music, some camera panning, and a sheepish admission from Chaikan that “doing a live demo is harder than landing on the moon.”

Indeed, live demos can feel like lunar landings. You can watch the video here if you really need to see how badly things went.

Here’s Microsoft’s rehearsal video for the demo where things went very well. It recreates the historic 1969 Apollo 11 mission and Neil Armstrong’s first steps on the moon. It’s amazing to watch all of this unfold in front of you, from any perspective you want. Sit down next to it. Stand up. Expand it. Shrink it.

This is the power of Mixed Reality.

But it gets better. As Dana Cowley at UnReal Engine put it,

The demo presents a vision for the future of computing in which manipulating high-quality 3D content using a headset is as accessible as checking email on a smartphone.

Easy manipulation and creation of content is exactly where we want to be for Mixed Reality experiences. As easy as checking email should be every immersive developer’s lodestone.

Change only comes with risk – on the macro level of the institution to the micro level of a single demo. Knock Microsoft if you want, but not every demo works. To our minds, it’s still a better approach than Magic Leap’s hesitancy to do any demos at all. That Alex Kipman and the entire HoloLens team is willing to risk live demos speaks volumes about their commitment to the product and the future of immersive technologies.

The long history of tech innovations is littered with moments of failure. You know the drill. Pick yourself up, figure out what went wrong, and do it again. It’s the only way we’re going to make this work.

We’ll see what the future holds on Day Two and Three of the Build conference, tomorrow and beyond.

A Conversation on VR with Brett Leonard,