Can the Lenovo AR headset beat Microsoft at its own game – Mixed Reality in the enterprise market? Microsoft’s HoloLens is already on version 2 with significant improvements. They have a laser focus on the corporate market. So much so that there’s no pretense of marketing the $3,500 HoloLens 2 as a consumer device.

Remember those demos of the first HoloLens at the Build 2015 conference? That vision of how you would sit on your couch at home planning your trip to Hawaii? While at the same time wearing Microsoft’s HMD and watching media on portable virtual screens? The demos were incredible, but the dream died quickly. Microsoft realized that only the corporate market was interested.

So along comes a Lenovo AR headset, the ThinkReality A6. It has a lot going for it, and one serious drawback. We don’t know anything about the cost, but we should have that information shortly. The big question: does it have what it takes to go up against Microsoft’s headstart in the mixed reality enterprise market? 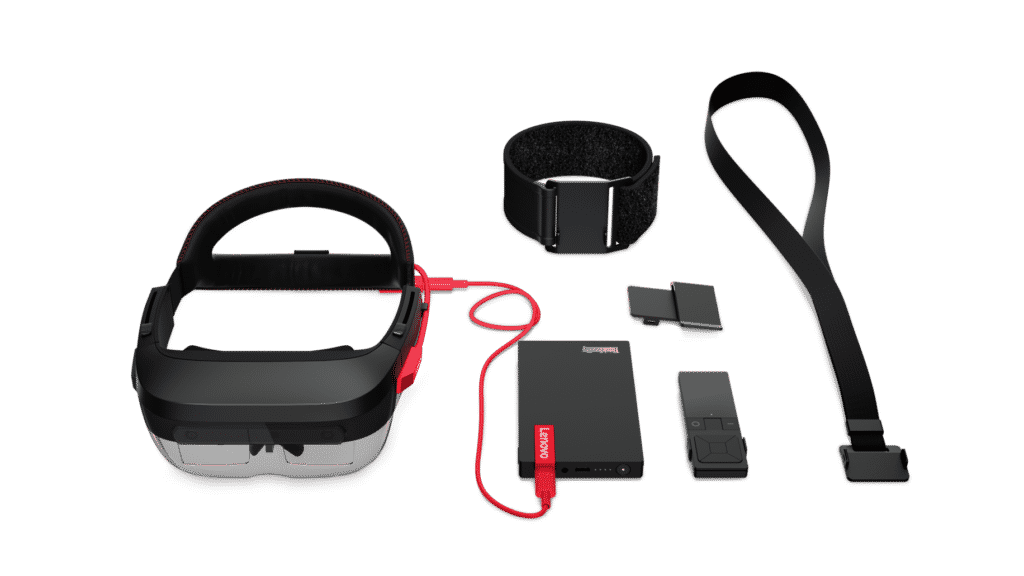 Here are the details from Digital Trends:

The ThinkReality A6 headset has dual-1080p displays in a 16:9 aspect ratio. That’s significantly higher than the first-generation Microsoft Hololens headset, which has a maximum resolution per eye of 1,268 x 720, but falls behind the Hololens 2’sconverted resolution of 1,440p per eye. The field of view of Lenovo’s headset falls somewhere in the middle of the two Hololens generations, too, with an above 40 degrees diagonal FOV, whereas the Hololens headsets are said to be 30 degrees horizontally, and “more than double” that for the second-generation AR headset.

The A6 is lightweight at just 380g, and its visuals are powered by an onboard Qualcomm Snapdragon 845 SOC. The 6,800mAh battery gives it up to four hours of continuous use at a time, and it offers a number of input options, including head and gaze tracking, voice commands, gesture controls, and a three-degrees-of-freedom hand controller.

Besides the sleek look, the Lenovo AR headset wins hands-down on weight. It’s a remarkable 380g compared to the HoloLens 2 at 566g. Of course, that comes at a cost. Microsoft can claim their HMD is untethered while the Lenovo device has a separate component you wear on your belt. The processor and battery unit is about the size of SSD hard drive and which is clipped to your belt or worn on your arm with an armband.

The fact that you carry the second unit with you may not bother workers using it in the field. There are definite advantages in the lower weight.

Lenovo is also claiming a long battery life of up to four hours. HoloLens 2 comes in at 2-3 hours with continuous use. The ThinkReality HMD is a lot closer to lasting a full workday with intermittent use.

But the real HoloLens-killing feature is that the Lenovo AR headset is Android-based. It’s entirely device and content agnostic. An AR headset that isn’t restricted to a specific ecosystem is bound to find a market.

Where the Lenovo HMD Falls Short

The one drawback is that 40-degree diagonal FOV. Compared to the first HoloLens with its claustrophobic 30-degree FOV, it’s an improvement. But it doesn’t match HoloLens 2’s FOV, or what the Magic Leap One offers. And that’s an issue. The smaller the FOV, the more you have to move your head to engage with a mixed reality world.

Think about it. If you’re working on a single piece of machinery, a small FOV doesn’t get in the way. If you’re standing in a warehouse with merchandise stacked 20 feet high, it’s going to present a problem.

Lenovo’s Glass Visor HMD marks another step toward getting AR / MR devices into the work environment. And to our mind, they’re taking the right approach. As comfortable as HoloLens 2 is, you’re still wearing the entire computer on your head (and it’s the battery issue that impacts the weight). Wearing part of it on your belt resolves the issue – as Magic Leap realized.

If Lenovo undercuts Microsoft on the price, they’ll find a ready market. And as AR and Mixed Reality HMDs take hold here, they will quickly spread into healthcare, education, and other areas.

But the cost will have to fall significantly before we see full-featured AR Glasses in the consumer market.

Can You Resist a Deepfake Salvador Dalí