Now that the dust has settled with the arrival of the hotly anticipated HoloLens 2 at MWC Barcelona (formerly Mobile World Congress), it’s time to take stock of the new headset. You have to hand it to Microsoft. When it comes to immersive tech, they do good demos.

And they’ve cut their own path between augmented and virtual reality. They didn’t coin the term Mixed Reality (which dates way back to the 90s) but they’ve popularized it with the rebirth of immersive devices in our era.

So what should we make of Microsoft’s HoloLens 2? Is it a game-changer? Will it do everything Microsoft promises? Should you expect to see someone wearing it in the near future at work? In a store, airport, or educational institution?

The answers to these questions require more than what was revealed at MWC Barcelona, But their demo was more than a Magic Leap show-and-let-you-touch-it-later style event. They got the device into the hands of reviewers. And the features and specs are widely distributed, giving us something to work with. 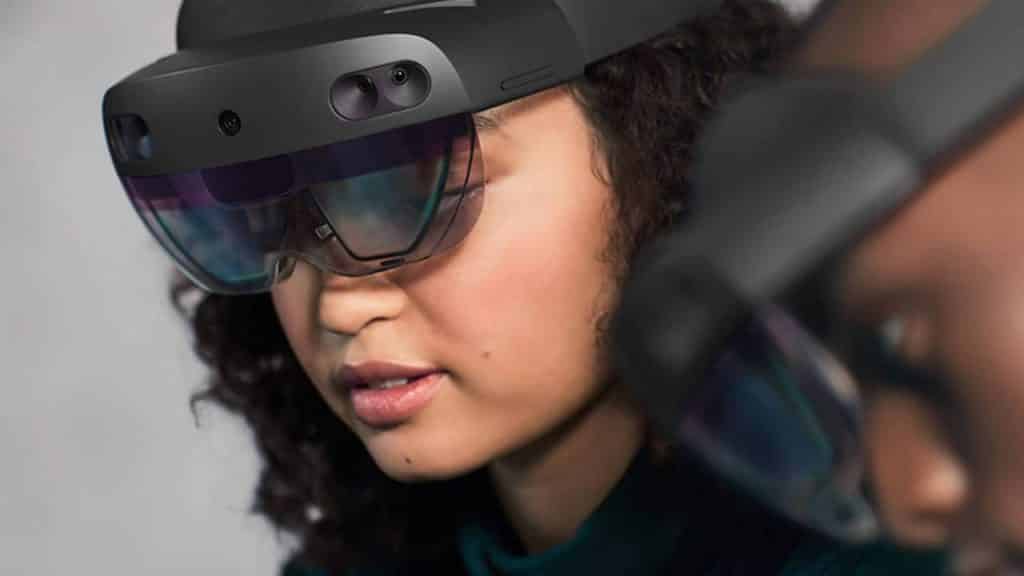 Let’s take a look at four areas: the target market, hologram interaction, the innovative eye-tracking feature, and the overall design.

And one little mistake that they got caught with the field of view. They do good demos – we didn’t say perfect demos.

As we noted during the live-stream from Barcelona, Microsoft is going after the enterprise crowd. There were hints of possible educational and entertainment uses, but the focus was on the workplace. You won’t see someone wearing HoloLens 2 out on the street (well, nothing would surprise us living in New York City). Instead, Alex Kipman pushed the ability to customize the HMD for construction sites and other work locations.

This makes sense as the original HoloLens only gained traction on the factory floor and out in the field. Remember when Microsoft showed off RoboRaid, which was an eye-opening immersive gaming experience back in 2016? Despite an innovative gaming platform and polished videos (take a look if you forgot), no one was going to drop $3,000 for head-mounted entertainment. And in education, it never went beyond a few innovative projects.

We’ll surely see some uses in the learning environment for the new version but cost and development time will make most institutions think twice about doing more than demonstration projects. Unless, of course, you’re associated with a hospital or healthcare facility. In that case, you need to take a closer look as the new HoloLens has major potential to transform healthcare. 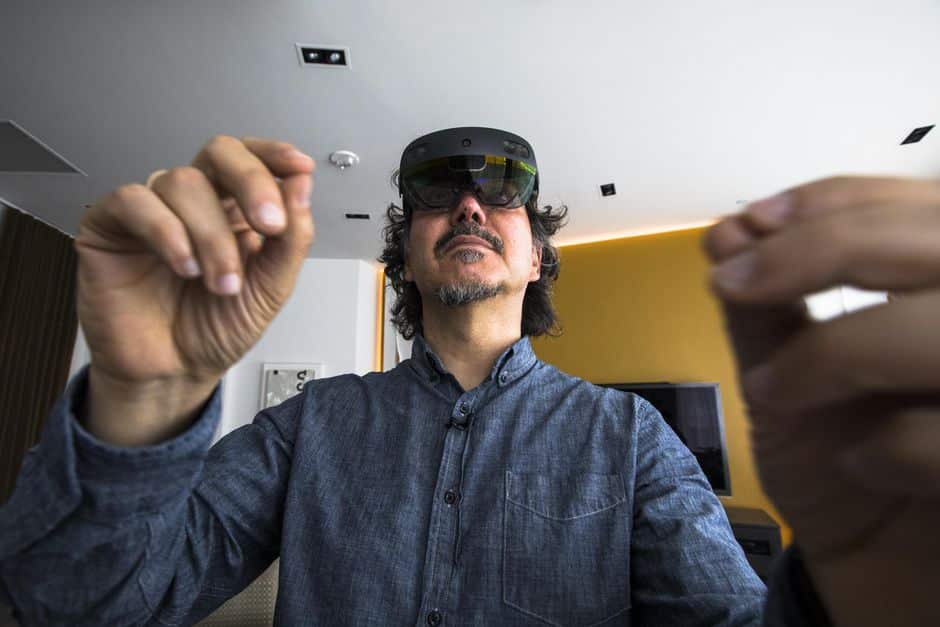 The original Holograms were fascinating when they first appeared. But if there was a weakness in HoloLens 1, it was the challenge in manipulating them. Some people picked it up right away, but others were challenged by the hand gestures. You know exactly what we mean if you tried to show someone how to use it or even did public demos with the device.

Telling people to “hold your fingers like this” is a recipe for frustration.

The new interactions are fascinating. You can pinch, stretch, collapse holograms like highly flexible digital putty. The fact that it recognizes that you want to pick something up is amazing. Without a hand controller, there’s no haptic feedback, but it’s still a huge advance from version 1.

There are no physical controllers with the HoloLens 2: Microsoft is relying completely on hand tracking and voice controls. Hand tracking has taken a pretty big step forward, too. The sensors can now recognize up to 25 points of articulation per hand through the wrist and fingers, plus can recognize the direction of palms, which means finger-bending, hand motion and an ability to pick things up. The first HoloLens used gesture-based finger clicks and simple moves. This time around, it’s pinching, pulling, pressing.

The new gestures are one of the most magical aspects of HoloLens 2. Finally, we have a true Mixed Reality Windows environment. One that is usable without a mouse or a trackpad.

The other major innovation with HoloLens 2 is in the integration of eye-tracking technology. Down the road, Microsoft has hinted that it may even be able to read your emotions. Now technology is getting interesting.

But even in the demo, eye-tracking is used to interact with objects. As Quartz described it,

During the demonstration, the Microsoft HoloLens designer who was walking me through the demonstration asked me to look at one of the grapefruit-sized objects that looked like a multi-faceted gem, and say “pop.” I did, and the one I was looking at popped. There was no gesture, no pointing, and the device didn’t preemptively pop the object I was looking at when the other person in the room said “pop.”

Popular opinion to the contrary, Microsoft does learn from its mistakes. The first version was comfortable enough to wear, but there are major improvements in version 2. The device now rests on the top front of your forehead instead of your nose. Wearing glasses presents even less of a problem than it did with the first version.

A feature that should be a requirement on most HMDs is that the visor flips up when you want to work in the real world. And while it’s almost the same weight as version 1, it feels much lighter and less in the way.

It’s a technology that begins to disappear in the interactions with your environment.

One Mistake – the FOV

Microsoft didn’t get everything right. There was always a sleight-of-hand with the first HoloLens and its small field of view. Microsoft’s videos gave the illusion that you saw much more than you did while wearing it.

At MWC Barcelona, Alex Kipman proclaimed that HoloLens 2 has over twice the FOV. Exciting news. Except that it turned out not to be entirely true.

Ben Lang took Microsoft to task in RoadtoVR for misrepresenting the increase in FOV.

The difference between the actual field of view and what was presented is not just a little bit wrong… it’s like, way wrong. Microsoft made a big deal about the “more than double” increase (in area) compared to HoloLens 1, but managed to misrepresent the difference by an even larger margin, showing a 5.2 times area increase over HoloLens 1 in the visual.

Here’s his diagram of what Microsoft showed as the field of view and what it actually is. It’s significantly better but not what was illustrated in the demo: 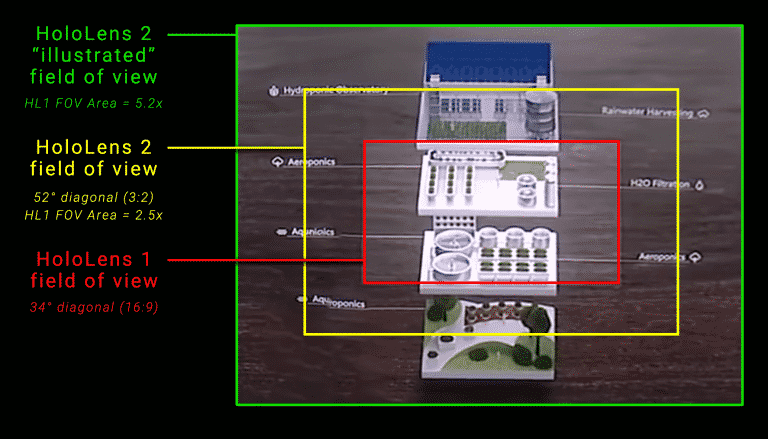 It’s still truncating full holograms when you get close to them. However, it’s within the range of the Magic Leap One which was a benchmark Microsoft had to achieve.

Microsoft’s often repeated mantra on the release of HoloLens 2 was that it offers more “comfort, immersion, and out-of-box value.” That last issue will be determined by end-users, but Microsoft delivered on the first two points.

As Wired said, it’s not an everyday device.

It’s for people whose jobs are being digitally transformed—people who work in design or manufacturing, who fix gear shifts and work on oil rigs, military personnel.

So is it as Mashable proclaims, “a huge leap forward for augmented reality”?

Yes, on the technology side. If widely adopted in enterprise, it will mark another step on our road to an immersive future.

HoloLens 2 holds the seeds of what’s to come – especially with gesture-based interaction and eye-tracking. It’s a device that hints of the forthcoming transformation of our relationship to technology, the world, and ourselves.

But we are still waiting for that game-changing device – the one that captivates the public at large.

With the innovations in HoloLens 2, it’s clear we may not have to wait that much longer.