Here’s an early reaction to Magic Leap One from David Gull, CEO of Outer Realm. The Marina del Ray based company uses VR, AR, and 360° video to showcase real estate and other projects so the Mixed Reality device is a good fit for them. Gull does a seven-minute video response – not a review so much as just his unvarnished thoughts a day after receiving the device.

The other initial review worth watching is Adi Robertson’s very honest reaction to the HMD in The Verge. She wants to like it more than she does,

Using the Magic Leap One is way more impressive than looking through a phone, but it feels a lot like using Microsoft’s existing mixed reality headset,the HoloLens, which shipped way back in March of 2016.

We noted some of the issues last week – particularly the limited field of view, though the frame around the lenses mitigates that to some degree. It’s definitely better than Microsoft’s HoloLens in the FoV area, but not as much as we were hoping for. (And yes, that’s undoubtedly why they avoided the FoV question in the runup to the release).

Initial reaction to Magic Leap One

On the positive side:

As David Gull notes, many of the issues he raises may be resolved in future versions. And he’s not the only one to point out that while the innovative Mixed Reality headset is far from perfect, it has amazing potential.

We’ll keep our eye out for other reviews and feel free to share your initial reaction to Magic Leap One. Despite the issues, it remains in our eyes a potentially ground-breaking Mixed Reality headset.

For a wearable device, we’ve come a long way from the early days of Google Glass. 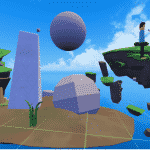