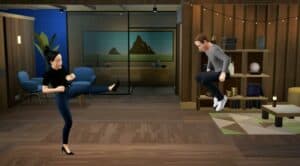 Meta was busy burnishing its image problems last week at Connect 2022 event by introducing a state-of-the-art XR headset and new features for the not-so-widely used Horizons virtual world platform. Despite the cost, the Quest Pro may be an impressive device, and its groundbreaking features may warrant Road2VR’s accolade that it marks the dawn of the Mixed Reality Era. But everyone was noting the upcoming release of next-gen avatars with legs and full-body tracking. No love has been lost for Meta’s waist-up cartoon-like avatars, and Connect 2022 offered jaw-dropping illustrations of fully flexible next-gen avatars with legs.

It seemed too good to be true . . . and after the dust settled from the PR avalanche, it turned out that it was. If you want virtual legs with your Oculus avatar, you’re going to be waiting a while longer.

It’s not so much that Meta was unable to deliver on a long-time commitment. Its work on photorealistic avatars remains at the forefront of advanced-level research for virtual or augmented reality. It was that they pulled off a charade and only owned up to it when they got caught.

Sometimes, Meta never ceases to amaze with their XR developments. Other times, you feel like the company is run by a bunch of children.

Here is the video clip with CEO Mark Zuckerberg jumping up and down on virtual legs with his full-body avatar. It looks fantastic and is a significant step forward in avatar rendering. But, as Zuckerberg notes, there are significant challenges in having to use AI to properly project the placement of your legs when the headset you are wearing is unable to see them.

The problem is that the entire scene was not rendered using Meta’s forthcoming avatar SDK, but via traditional methods with trackers on his legs. The next-gen avatars were basically last generation’s avatars.

As ben Lang said in Road2VR,

From what I know of the existing tech and limitations for tracking the body from a headset… what was shown here would have amounted to breakthrough work from Meta. Here was Zuckerberg literally jumping around and touching his feet with seemingly perfect tracking. His on-stage guest also highlighted what appeared to be perfectly accurate elbow tracking, something that’s only roughly estimated with today’s avatars. Zuckerberg then proceeded to say that these avatars would be launching sometime next year.

But all is not what it seems. After reaching out to Meta to clarify what tech was used to create that segment, a spokesperson told me the team used common external motion capture tech to drive the movement of the avatars, rather than its own solution running real-time on one of its headsets.

Reaching out to Meta, Ben Lang was told that

. . .  the [Meta] team used common external motion capture tech to drive the movement of the avatars, rather than its own solution running real-time on one of its headsets.

. . . the company explained the segment was intended to show off how the next-gen Meta avatars look (from a model and texture standpoint) but how they moved was, “presented for illustrative, forward-looking purposes,” the company said.

So essentially, we were looking at avatars produced using Vive trackers, which we’ve had access to all along. Meta’s new avatars have a long way to go before they get their legs.

Meta may have faked their next-gen avatars last week, but we will get full-body avatars in the future. And as Zuckerberg notes, it will like take developments in AI – and processing power in our HMDs – to bring them about.

There’s nothing wrong with a bit of faking the future – we do it all the time and it’s essential to visualize our speculations on how technology developments will impact us. But faking it in the midst of a company product push for the Metaverse goes a step too far.

We’ll eventually have next-gen avatars, but don’t go leaping out of your seat with your virtual legs – because we’re just not there yet.