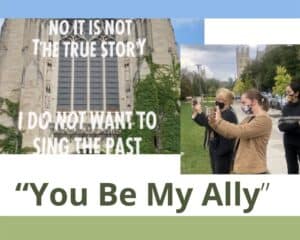 The Jenny Holzer AR art app debuts today at the University of Chicago. The work of the well-known conceptual artist is well suited for augmented reality. She began in New York in the 1970’s with posters incorporating statements and narratives and soon expanded into a variety of media – signs, paintings, light projections – whatever would hold elements of our language. She found herself at the center of public attention with her 1982 ‘Truisms’ on a Times Square billboard, a sign stating in all-caps, ‘Abuse of power comes as no surprise.’ In the 90s, she expanded the media she used, even doing a very early (1995!) interactive artwork on the web.

We actually walk by (and occasionally step on) one of her works multiple times a week as we’re near the AIDS Memorial in Greenwich Village. She did the granite paving stones engraved with excerpts from Walt Whitman’s poem “Songs of Myself.”

Jenny Holzer’s new augmented reality work, YOU BE MY ALLY,  is designed for the University of Chicago but can be used elsewhere. Initially, she considered making a light projection on the buildings, but with the COVID-19 pandemic, the risk was too high to encourage people to gather together to engage with her work. Thus, the AR app was born, which will significantly expand the public range of the piece.

According to the UChicago News,

YOU BE MY ALLY will feature 29 excerpts from historically significant readings from the Core curriculum, selected in collaboration with UChicago students and faculty, including works by distinguished writers W. E. B. Du Bois, Helen Keller, Audre Lorde, Toni Morrison, Friedrich Nietzsche, Plato, Mary Shelley and Virginia Woolf. The title of the project itself is an excerpt from If Not, Winter: Fragments of Sappho, a translation by classicist Anne Carson that is among the Core readings. 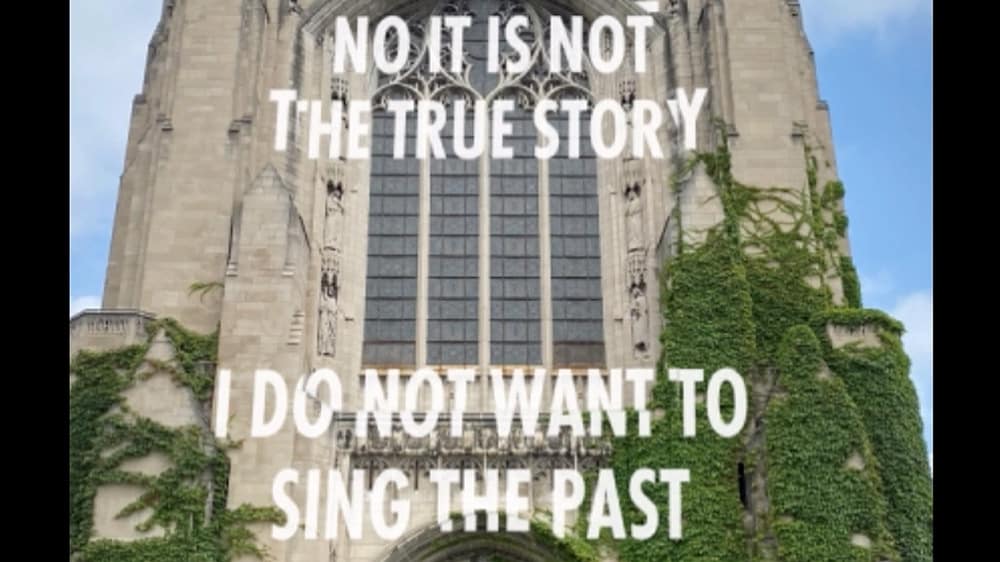 The 29 quotes come from excerpts submitted by students and faculty at the University of Chicago. And student participation was critical in the development of the work. According to the University’s Department of Art History,

A total of 10 graduate and undergraduate students, specializing in fields ranging from art history and English to computer science and social work, have worked on various aspects of the commission, including testing code and developing curricula for K-12 and Core curriculum students.

Many of the quotes Holzer selected are from female authors, and they raise critical issues of war, violence, love, and justice. One of the most provocative is from Mary Wollstonecraft Shelley,

You Sit Among the Ruins and Lament the Fall.

Christine Mehring, the Mary L. Block Professor in the Department of Art History and an adjunct curator at the Smart Museum of Art, describes the artist’s intent:

Jenny is known for the fiercely critical interventions in public space that lead her to seize those media, but hers is a profoundly generous art all the same: inviting our students to submit content, welcoming the full campus community and general public to engage in the kind of close reading we teach at UChicago, opening the boundaries of academic discourse and a liberal arts education, providing a safe and meaningful experience of art amidst the converging contexts of the pandemic, calls for social justice, and the election season.

The quotes will live outside Holzer’s AR art app as they will also be displayed on trucks in the streets of Chicago on October 5th. And if you download the app, you’ll be able to situate the quotes in other locations, even your own living room.

Engaging the University with the Public 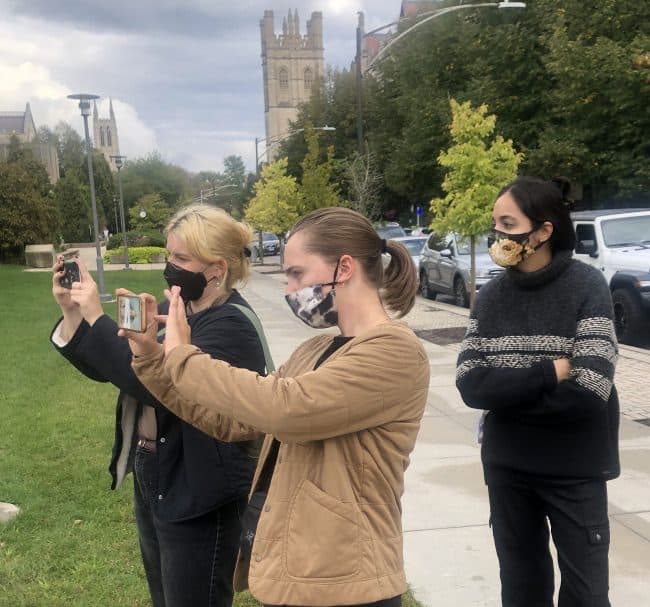 Unlike virtual reality, AR immediately lends itself to public dialogue. We’ve seen it in Nancy Baker Cahill’s Liberty Bell and in the expansive public AR art exhibition in Boston last summer. It’s even better to see it stake a claim on the stone walls of a university’s gothic buildings. Jenny Holzer’s AR art app takes a foundational curriculum and reconfigures it as a living entity, inviting students and the public to interact with it.

As with everything done in AR right now, you see the potential of what artists and others will do when AR glasses are ubiquitous. For now, you’ll need your smartphone or tablet. But it’s still a unique moment when the walls of a university become a place for public dialogue. It’s a promise that augmented reality holds for us – and for the academy – in the future.