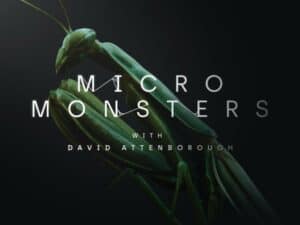 David Attenborough never ceases to delight with his innovative use of virtual reality to expand our knowledge of the natural world. His latest project, Micro Monsters, shrinks you down to the micro-level to experience the compelling and scary universe of insects in VR. Shifting the dimensions of space and time is one of the remarkable aspects of immersive tech, and Attenborough drops you into a world of monsters you’d never want to encounter in real life – though they’re always part of your everyday life.

Count yourself lucky for your size – though that won’t necessarily help you survive cataclysmic climate change as the dinosaurs found out. The insects will outlast us all, and they’ve always been the dominant life-form on our planet.

The project was developed with Alchemy Immersive, based in London, UK, the VR offshoot of Atlantic Productions studio. They focus on educational, nonfiction, storytelling, winning a BAFTA, and other awards for their work in immersive media. Two of their many notable projects include Space Descent VR and Munduruku: Fight to Defend the Heart of the Amazon.

Here’s the description from Oculus.

Over five episodes, experience the conflicts, courtships, and communities of this micro world. Witness a scorpion and a centipede fight to the death; experience the process of an aphid miraculously cloning itself; and an army of green ants building incredible structures. Narrowly avoid the deadly ambush of a Trapdoor spider and become transfixed by the Portia spider’s deadly musical lullaby. Combining spectacular live-action close-ups with the power of computer graphics, watch a caterpillar’s transformation from inside its cocoon and discover a beetle’s secret chemical weapon.

David Attenborough has been working in immersive media for years – we recall his early 2016 360 video simulation of a dinosaur. 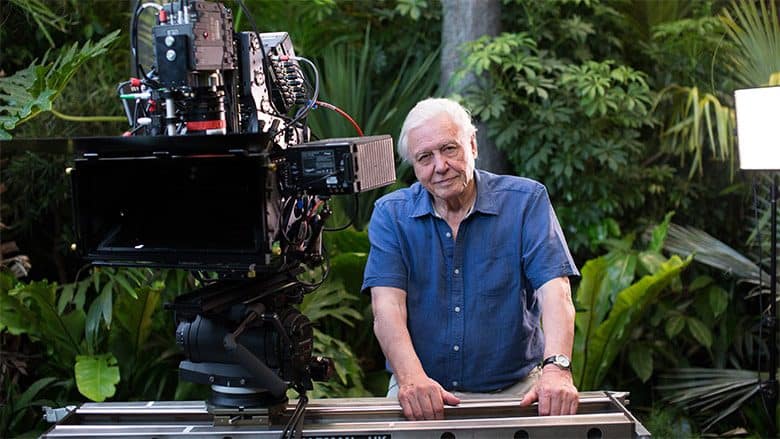 As you might imagine, putting this project together involved no ordinary 360 video. It was done using traditional stereoscopic cinematic techniques and shot in 8K with considerable post-production work.  Oculus spoke with the Director of Micro Monsters and Creative Lead at Alchemy Immersive Elliot Graves and Oculus Immersive Media Lead Eric Cheng to discuss what they learned about VR filmmaking in the project. The full interview is worth reading for the technical details, so we’ll highlight the 360 storytelling aspects here.

I think one of the biggest things Micro Monsters has taught me is that you don’t need to use specific 180°/360° capture processes to produce great content for VR . . . Learning to adapt and use existing content has undoubtedly changed my opinion about what is possible in this space when using existing content creatively and thoughtfully. There are challenges with this approach, but starting with arguably more substantial and more impressive assets will only result in a more refined product, which is likely to encourage a wider audience into VR. Start with an amazing story, and the tech will fall into place.

In other words, don’t get caught up in the technology. Insects in VR succeeds by first being an amazing story. The creators worked out the challenges by spending their time in headsets and attention to the details.

For me, there is continuous reinforcement that spending as much time as possible in headset leads to better-quality content. With Micro Monsters, we were fortunate because Elliot, Vianney, and the extended team at Atlantic Productions were in headset constantly during the production process (and they also have incredible attention to detail). We were able to refine the episodes until the production’s technical aspects faded away; the story is all that is left, which is the goal!

Eliot Graves sums up the unique qualities of Micro Monsters.

I hope people experience Micro Monsters and come to appreciate the vast but fragile world that exists under our feet, hidden from view. The beauty and intricacy of our environment can’t always be seen, but I hope this experience allows people to visit it and appreciate it first hand through a truly epic new perspective. Secondly, I hope creators see the potential of working with and adapting non-native immersive content inside VR, and that it encourages people to focus on powerful stories before technology and cameras.

The insects in VR experience is available on Oculus TV In the Oculus Quest 2 in 8K 3D at 60fps. If you’re using the original Quest, it gets dropped down to 5K due to the display. The five-part series covers the following stories:

Episode 1 – The Duel at Dawn: Dive into the deadly world of scorpions, as they battle for their pray and a mate.

Episode 3 – The Trap Door: Uncover the secret forms of defense and attack of the Trap Door spider and the Bombardier beetle.

Episode 4 – The Feast and Flight: Discover the miraculous shapeshifting bug that starts life as one creature and ends it as a completely different one.

Episode 5 – The Deadly Lullaby: Join the hypnotic Portia Spider as she prepares her attack on a spider twice her size.

Micro Monsters is a perfect experience for Halloween – or for anyone curious about what lurks beneath their feet and in the air around them. It’s also an incredible resource for anyone teaching Insect Biology (a.k.a. Entomology) during a pandemic.