If you find yourself near Boston this summer, check out the largest AR art exhibit in America. Go see it for the art. See it for the ways AR can create art and cultural experiences across the urban landscape. See it for the potential of augmented reality to saturate our environments with meaning.

It’s a glimpse of the future of art as artists integrate immersive technologies into their work. And if you look carefully, the implications are there for other disciplines. Augmented reality, in the words of Charlie Fink, will paint the world with data.

The Exhibition in Boston

The show is located on the beautiful Rose Fitzgerald Kennedy Greenway, the linear park created from the demolition of the elevated Central Artery through Boston. The highway – which originally displaced 10,000 people, destroyed a 1,000 buildings, and cut off entire neighborhoods from the city – was buried underground in the Big Dig project. The Greenway winds through multiple neighborhoods and has been the site of many public art projects.

This year, it’s the site of the largest AR art exhibit in the country. The augmented reality works are part of the Greenway’s 2019 Public Art exhibition, titled “The Auto Show”.

The AR part of the exhibition is spread out over 16 stations on the 1.5 mile Greenway. Physical markers show where people should take out the phones to explore the artwork. In addition, the show also includes Julie Libersat’s immersive and interactive environments and CGI imagery by Chris Labrooy that turns cars into sculptural forms.

According to the Greenway, the artists involved

. . . explore the form of the automobile and the imaginative qualities of construction and movement through ideas of transportation.

It’s an ideal location for the exhibition given that the Greenway follows the path of what was one of the most despised highways in the country.

There’s a lack of good videos on the AR project so we’ll go with the overview from Boston’s CBS TV News:

All you need to experience the augmented reality installations is the Hoverlay App. There are AR works by a variety of artists, including Nancy Baker Cahill, who has created some remarkably innovative projects through her 4th Wall app.

VRscout describes how the AR art exhibition came about. Lucas Cowan, the art director for the Rose Kennedy Greenway,

. . . turned to Nancy Baker Cahill, John Craig Freeman, and Will Pappenheimer—three AR artists from a prominent AR artist collective called Boston Cyberarts—along with historian Amy Finstein, to transform the Greenway into a treasure hunt of AR imagery that explores the past, present, and future through old photos and audio narratives about the area you are in, as well as contemporary AR art that you can walk around inside.

The augmented reality art ranges from social commentary to insights into the changing urban landscape of the city. 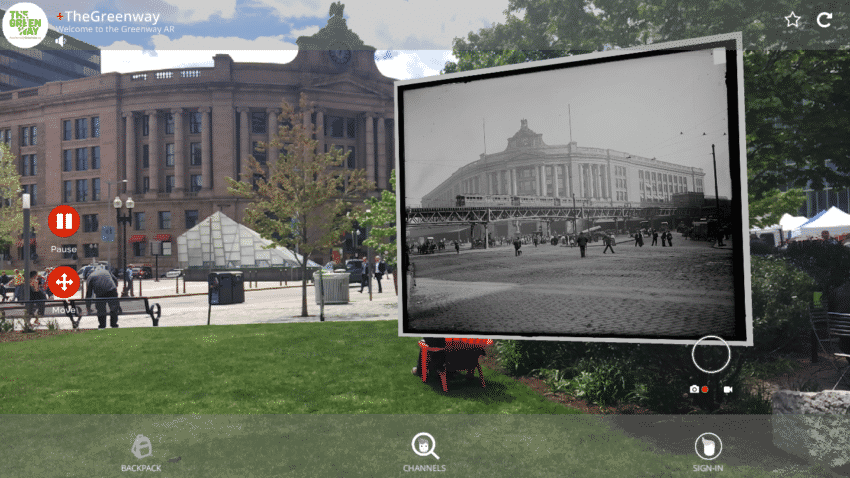 AR and the Future of Art

Of course, we’re not at the point where you can interact with the largest AR exhibition through AR Glasses. It will be a world of difference when you no longer have to walk around, holding up your phone or tablet. But the show on the Greenway is remarkable for its ambitious scope and its implications for the future of art.

A few years from now, art exhibitions will take over entire urban landscapes and call into the question the role of museums in showing contemporary art. Why is an artwork indoors, surrounded by minimalist white walls, and require an admission ticket? That’s not to say every work should be outside or situated within a specific environment. But it will call into question the role of the museum as the ultimate destination for all artistic production.

Will it eventually empty our museums of contemporary work the way digital publishing emptied the shelves of our libraries? That’s not clear just yet. But artists will have exponentially greater opportunities to engage the public outside of formal institutions. And as we know, monopolies can handle just about anything except choice.

Let us know what you think of the exhibition and the use of AR if you get to see it. The show is open through the fall and you can schedule free tours through Eventbrite.  With the popularity of the Greenway, it will be a major introduction for the public to the potential of augmented reality in art.