After a long weekend of work (conference proposals, VR projects, etc.), we were delighted to stumble upon Nancy Baker Cahill’s AR art project. There’s nothing like watching augmented reality transform your workspace – even if it’s as simple as stepping inside someone else’s art studio.

The genius of AR is that it transforms space while keeping you spatial grounded. If VR is the full-blown HoloDeck, AR is the 21st-century version of a Pepper’s Ghost illusion in your hand.

You can get a two-dimensional sense of what it’s like to step into Cahill’s studio on Vimeo – though you really should download the app for yourself. Built on ARKit and ARCore, it’s incredibly well done. You can wander around her studio and even look at her art pinned to the walls.

Initially, Cahill created the AR app, 4th Wall, to share her art and give viewers greater agency. From Art News,

In its initial iteration, the app enabled people around the world to see Baker Cahill’s works on paper and virtual reality drawings, which often focus on the human body as a site of struggle, as augmented reality—that is, transposed onto her viewers’ environment via their Androids, iPhones, and iPads.

But wanting to push into the public AR art space, the 4th Wall app added a new feature last month, “Coordinates”. This is where Cahill’s AR art project takes a fascinating turn.

“Coordinates,” . . . allows users to activate site-specific pieces by Baker Cahill and five participating artists—Tanya Aguiñiga, Beatriz Cortez, Kenturah Davis, Micol Hebron, and Debra Scacco—through their smartphones and tablets. With the exception of Hebron’s and Scacco’s works, all of the AR projects on “Coordinates” are based on already existing artworks.

While the new pieces are site-specific, unlike many early AR apps there are – thankfully – no markers. Arrows within the app direct you toward the geo-located artworks that expand in size on your phone the closer you get to them.

As you might surmise, with only five artists there’s not many of the artworks around – though they are much more accessible than they’d be as physical objects. It is a new model for public art that maintains curatorial control while opening access. Cahill describes Coordinates as a project

. . . created by artists that activate the historically, politically or culturally significant sites they have chosen. Coordinates, an AR project created from the desire to use technology as a subversive form of resistance, aims to inspire thoughtful dialogue and expand our understanding of public art.

According to her, another round of artists will make their appearance on the app in the near future. But you’d need thousands more to really have an impact.

The ethical dilemma of AR art

And thousands and thousand later . . . could there be too much of a good thing? Expanding access to public art is critical but what happens when it leaps out of the organizer’s control?

As Scott Belsky observed, it won’t be long before augmented reality objects can be placed anywhere by anyone. Just as YouTube opened the door for amateur musicians and fashion designers, AR will open new opportunities for unrecognized artists and those excluded from traditional exhibition venues. But with AR art everywhere, will creativity flourish or disappear in a deluge of quantity?

The problem may be no different than what we face now with information – except that the challenge of filtering is limited to our screens. With augmented reality, filtering will become a spatial and environmental concern in our everyday lives. And right now, we’re nowhere close to even understanding the problem, much less coming up with a solution.

The recent travails of YouTube may be a harbinger of what’s to come. From its early days as a wide-open platform, it has stumbled badly in its recent efforts to curtail offensive videos. The Verge recently proclaimed that its “Golden Age” was over. Its AI-driven feed now skews toward more establishment material.

How will we curate AR art? Especially once we find our environments flooded with virtual layers of artistic, commercial and social activities and content. Will artists such as Nancy Baker Cahill take on new roles as curators? Creating the equivalent of AR art channels? Or will our immersive platforms become the arbiters of what we encounter?

Nancy Baker Cahill’s projects are fascinating as they position themselves in this transitional stage at the intersection of art as physically grounded object and art as immersive experience.

Download 4th Wall for iOS or Android and take a glimpse of where we’re headed in the future. 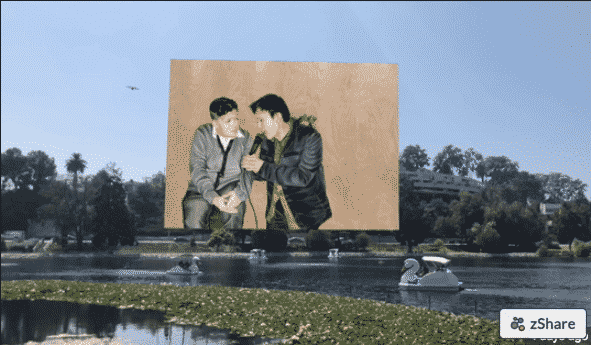 10 Augmented Reality quotes on the comin

Welcome to the future – AR telepor