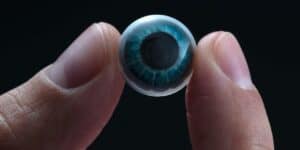 If Mojo Vision’s AR contact lenses don’t spur you into thinking about the future, we’re not sure what will. The company is working on AR displays so small you won’t notice them even when they’re positioned right on your eyes. All you would see is an overlay of AR data integrated with your natural eyesight.

. . . the Mojo Lens is designed to provide users with relevant information without having to look down at a separate device like a smartphone or computer, thereby keeping the user’s attention focused on their real-world surroundings.

Their AR contact lenses are still in the research and development stage, so there’s no need to worry if the glint in someone’s eye is actually a digital display. Not yet, anyway. But if the technology works out, the possibilities are fascinating. Not to mention the ethical challenges.

This sci-fi sounding development makes you think about our current crop of VR HMDs and early-stage AR Glasses. They’re amazing, yes, but from the standpoint of contact lenses, insufferably awkward and bulky. Someday, the Oculus Quest will seem as primitive as the first VR device from Ivan Sutherland. That one was so large it had to be hung from the ceiling. We’ve come so far with standalone HMDs and Mixed Reality glasses, but we still have so far to go.

Whether successful or not, it’s projects like this that will get us to the future.

The challenge for AR contact lenses is that the displays have to be extraordinarily small. Like the size of a grain of sand. And it appears that Mojo Vision has got the technology down.

I had no idea that displays not much bigger than a grain of sand even existed. But there it was, under the view of a microscope, displaying an image of Albert Einstein sticking his tongue out at me. Mojo’s newest and smallest display, it squeezes 70,000 pixels into a space that’s less than half a millimeter across.

This display is the centerpiece of the Mojo lens. It’s positioned directly in front of the pupil, so that it projects and focuses light toward a specific area of the retina at the back of the eye. The display is so small and so close that the eye can scarcely see it. 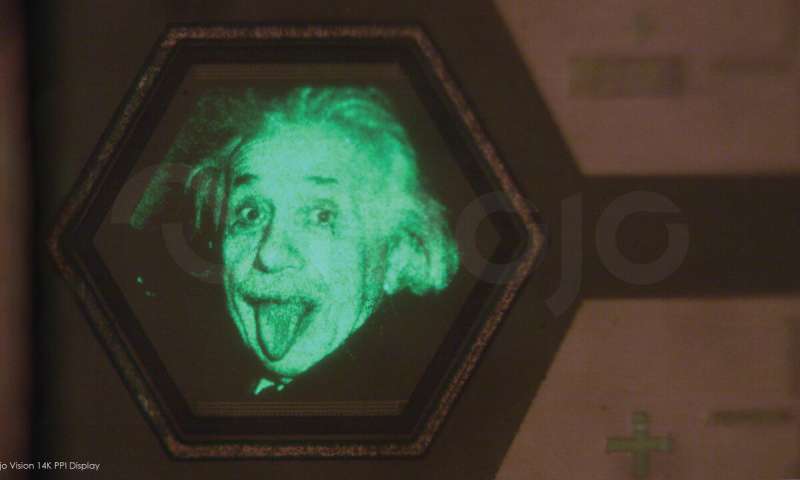 Focusing that miniature display on the fovea at the back of your eye is the key to making the concept work. The fovea may only account for 4% of the retina, but it’s where the densest concentration of photoreceptors is located. It’s the basis for the high-resolution signals moving through the optic nerve to your brain. Moving further away from the fovea gives us the lower-resolution, black and white signals of our peripheral vision.

The result is that Mojo Vision’s display can use significantly less power and light. And even though it’s right in front of your eyes, you’ll barely notice it.

Here are more of the technical specs from VR Scout,

Under the hood, the Mojo Lens houses the Mojo Vision 14K PPI Display, featuring an extremely impressive pixel pitch of over 14,000ppi and a pixel density of over 200Mppi²; a custom wireless radio, motion sensors for image stabilization and eye-tracking, and the world’s most power-efficient image sensor that’s been optimized specifically for computer vision; all adding up to what Mojo Vision claims is ‘the smallest and densest dynamic display ever made.’

AR Glasses have wrestled with power issues for years – a major reason why they’ve been slow in coming. No one wants the weight of a full-blown processor and battery on their head, and linking AR eyewear to your phone is still a less than perfect solution (we’re counting on you, Apple).

So how do you address the power issue for contacts? Not easily, but Mojo Vision has both a short and long-term solution. From Fast Company,

Along with the display, the Mojo lens will contain a supporting cast of microcomponents. The first versions will include a tiny single-core ARM-based processor and an image sensor. Later versions will add an eye-tracking sensor and a communications chip. At first the lenses will be powered by a tiny thin-film, solid-state battery within the lens. Sinclair says the battery is meant to last all day and will charge in a small case that’s something like an AirPods case. Eventually, the lenses might get their power wirelessly from a thin device that hangs loosely around the neck like a necklace. The lenses will also rely on an internet connection provided by a smartphone or other device for some of their functions, such as sending and receiving data.

The power issue is helped by the simplicity of the data displayed. We’re not talking about streaming Netflix or processing Mixed Reality experiences here. It’s a basic data overlay on the real world in a single color (for now).

But that’s not so bad when you have the ultimate wearable. Any smaller and we’re getting into the implant space.

A Long Way To Go

As amazing as Mojo Vision’s AR contact lenses are, there are additional technical challenges to work out. And we’d be remiss if we didn’t note the breakthroughs that have come before that have yet to amount to anything besides patents and concept drawings. We’ve yet to see much from the 2016 announcement of a polymer film coating that could conduct electrical current on contact lenses. And Google’s patenting of AR contact lenses from the same year didn’t result in anything concrete. But those developments are receding in time, and the technology has changed dramatically. There’s no guarantee that Mojo Vision’s AR contact lenses will work. But the starting line has moved a lot further down the track. 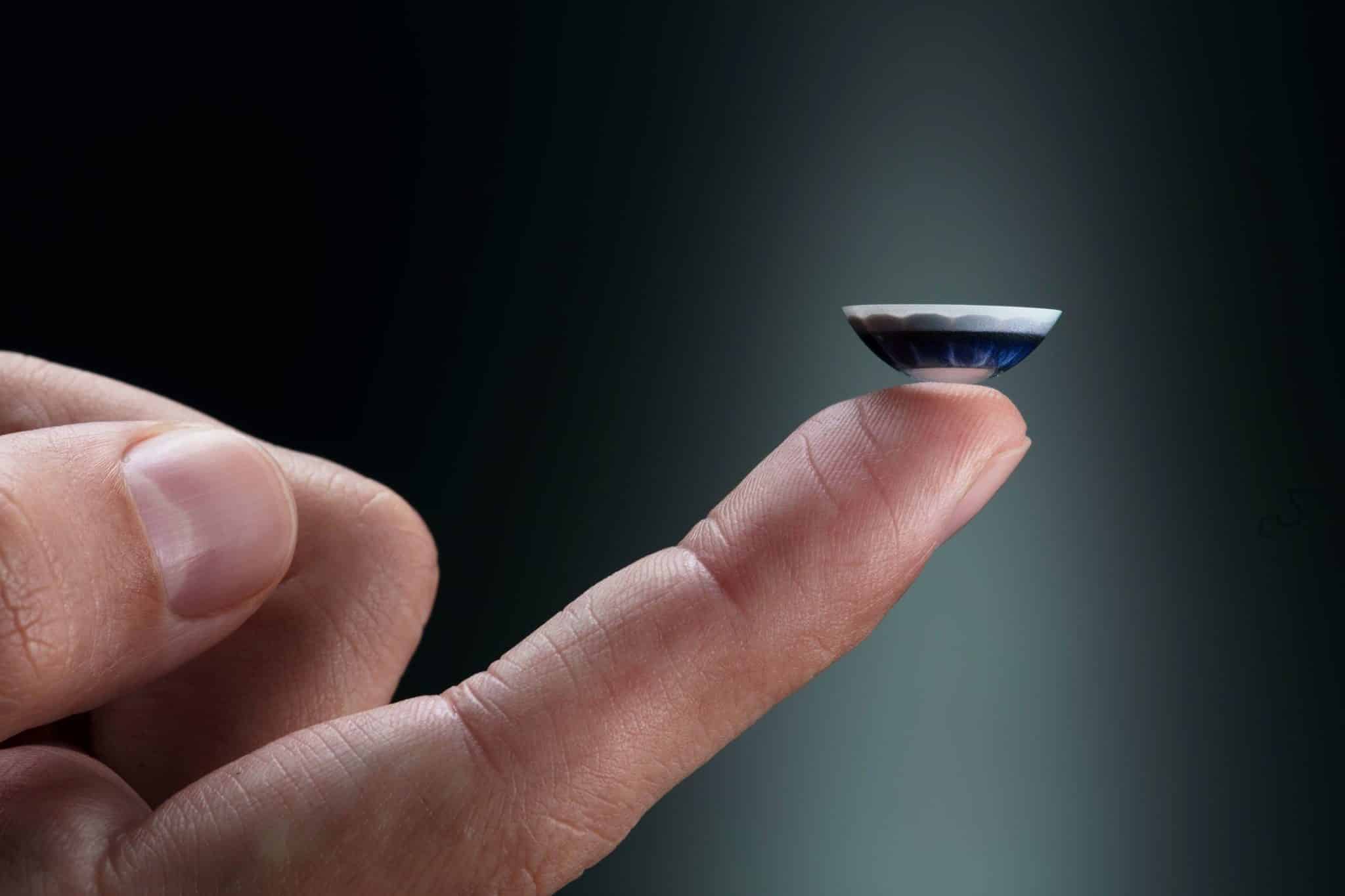 Remarkably, Mojo is developing nearly everything they need for the device to work. Senior VP of marketing Steve Sinclair was quoted in UpLoadVR,

And like all of our immersive tech developments, the device comes with a new term – “invisible computing.” As if we didn’t have enough categories already.

A Focus On Practical Applications

Mojo Vision’s development has one more thing going for it – a focus on practical applications. Their initial goal for the AR contact lenses is to help people with poor vision. As VR Scout points out,

As part of today’s announcement, the company also revealed a partnership with Vista Center for the Blind and Visually Impaired in which the company will work with many of the visually impaired patients currently undergoing rehabilitation at the Palo Alto-based nonprofit in order to refine their technology and provide more effective services for Vista Center clients.

These lenses could be used by people with various kinds of degeneration of the retina—the light-sensitive layer at the back of the eye—and by people experiencing presbyopia, the normal loss of ability to focus the lens of the eye on small objects that comes with aging.

Their work could bring immense medical benefits, and the Food and Drug Administration has brought them into its Breakthrough Devices Program. That could lead to the lenses being approved as a medical device.

Users will not only be asked to trust Mojo with their eyeballs, but with their data. People will soon realize the lenses potential for collecting information about all the things their eyes rest on, including products, places, political ads, and people. It’ll be on Mojo to assure them that the lenses don’t record that data and share it with advertisers or governments. 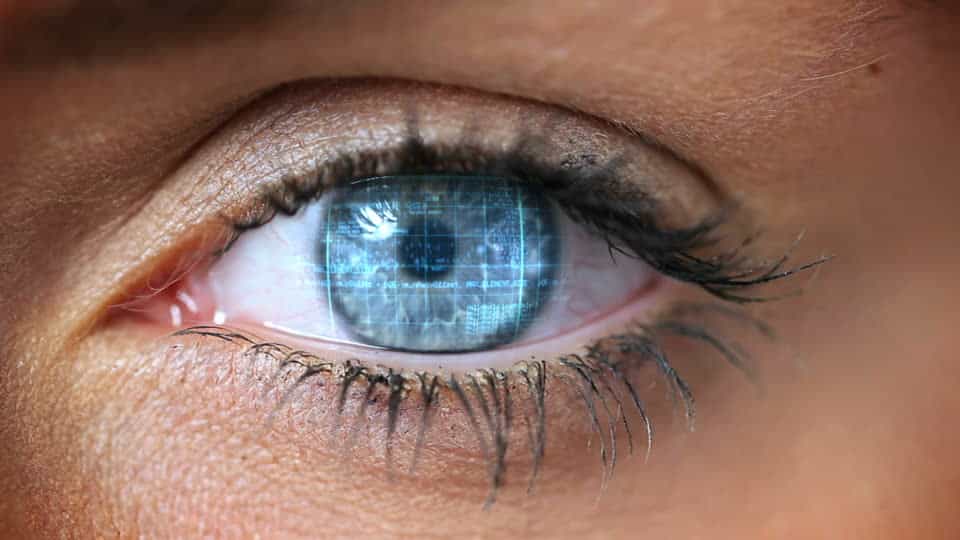 With one of Mojo’s founders coming from Apple, the company pledges to take privacy seriously. But the stakes are phenomenally high. Where else would an advertiser like to reside besides your contact lenses? And many governments would happily take up residence there.

However, it’s not just a question for the users of AR contact lenses but the public as well. Our initial social experiment in this area with Google Glass was a disaster. And with Glass, you could at least tell when someone was using it.

The sunglass format – similar to Samsung’s device at CES – feels a lot less intrusive. But no matter what format, AR will raise profound privacy issues for both users and everyone around them.

Our AR Future in Our Eyeballs

Mojo has its sights set on practical applications as well. One area they’re pursuing is using AR contact lenses for first responders such as firefighters. Better information with less gear is a winning combination.

Everything Mojo does now will hasten the integration of immersive technologies into our everyday lives. Eventually, AR and VR will literally be in our eyes. It will be as much a part of our lives as our natural eyesight is now. The real question will be how will we use it.

Octi: An AR Social Platform Ahead of its