Here’s an easy prediction to make about the (near-term) future. We’ll see all of the major players release augmented reality devices. Samsung’s AR glasses may have beaten everyone else to the starting line.

CES 2020 kicks off this week, and you can expect to see a pile of AR and VR devices in the news. You could see hints of the AR focus at AWE last year with an exhibition hall stuffed with AR hardware. But those were the startups like nReal (which may still factor in the market). Now the bigger players are jumping in.

Of course, a demo at CES doesn’t mean you’ll find anything on store shelves just yet. Lot’s of comments online are seeing this as vaporware. But with Apple, Facebook, and Google all pushing resources at AR wearables, it would foolish for Samsung to stand on the sidelines.

The demo at CES does mean the day is coming when everyone will regularly releasing AR devices. And once it does, we’ll never look back (few of us ever look back at the pre-smartphone era).

Just as the last decade ended in a very different place from where it started – you do remember Palmer Luckey’s Kickstarter project? – the new decade will do the same. Hold on to your essential tech hardware for now. Soon, it will be nothing more than dust collectors in the back of your closet.

Here’s the demo from CES with the AR Glasses.

As Techcrunch noted, Samsung left aside its popular phones and other devices to focus on augmented reality. And more, the demo included a fitness routine with an avatar that was “fairly creepy.”

Get used to it, we’re going to have avatars – creepy or not – running around all over the place. By 2030 at the latest, and likely much sooner.

AR And The Fitness Angle 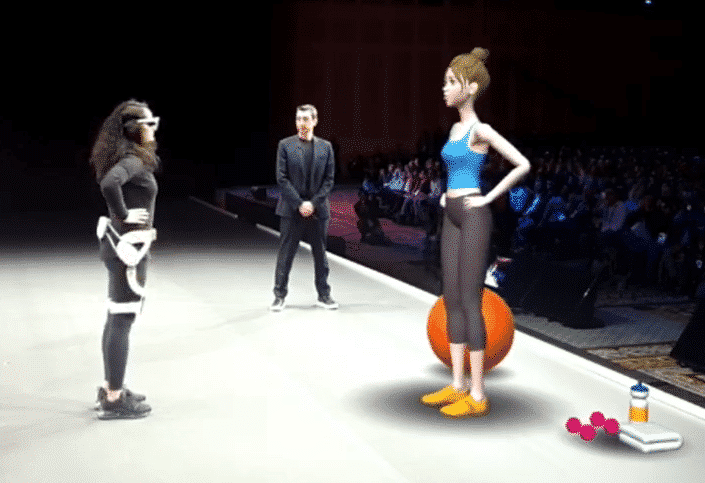 Going with the fitness approach is smart, as it’s something everyone can understand. It could easily target the bulky and spacing-consuming exercise equipment in so many homes. Of course, that exoskeleton is way too big, but it will slim down in size.

Speaking of size, the avatar in the demo is . . . well, quite tall. On purpose, perhaps? That will make you exercise if a digital being is standing over you.

According to VR Scout, there are other obvious uses for Samsung’s AR Glasses, including training for mountain-climbing and walking underwater. It could overcome the public acceptance challenges that VR is just now beginning to shake off.

While the demo of Samsung’s AR Glasses didn’t mention it, the possibilities for using the device in the medical field are immense. And it would have clear uses in other disciplines, especially if a few years down the road, students start bringing their own. It gets around the issues of building and maintaining VR labs.

We’ve never been of the mindset that AR use will overwhelm virtual reality. There will be a broader market for augmented reality with its practical applications, as Samsung demonstrated here. But in truth, we think AR sales will only help VR acceptance. Call it a sort of gateway drug into the larger world of immersive experiences.

For now, let’s see what tomorrow brings as CES 2020 gets underway.