We tried out nReal’s AR Glasses at the Augmented World Expo (AWE) in Santa Clara last week and were impressed – by both AWE and nReal’s glasses. Celebrating its tenth year, AWE has suddenly become a massive AR event with over 7,000 attendees and exhibitors. To no one’s surprise, this year was all about AR Glasses in every imaginable form. If you’re interested in AR and smart glasses, definitely try to make the Expo in May 2020.

nReal’s AR Glasses caught our eye at both the press preview and on the exhibit floor. We highlighted them back in January when they showed up at CES 2019. But while that version intrigued us, it presented challenges with the hockey puck style device that came with it. The version nReal showed off last week takes a more straightforward approach of relying on your phone. They’re a lot less expensive than the ones at CES. $499 isn’t exactly cheap, but it opens the door to a broader sector of the consumer market. And we might even see some adoption in the education and retail markets.

Remember ODG’s long-running AR project which ended in a fire sale? Those were going to cost you between $1,000 and $1,800 depending on the model. The price of augmented reality is finally starting to show a little realism. 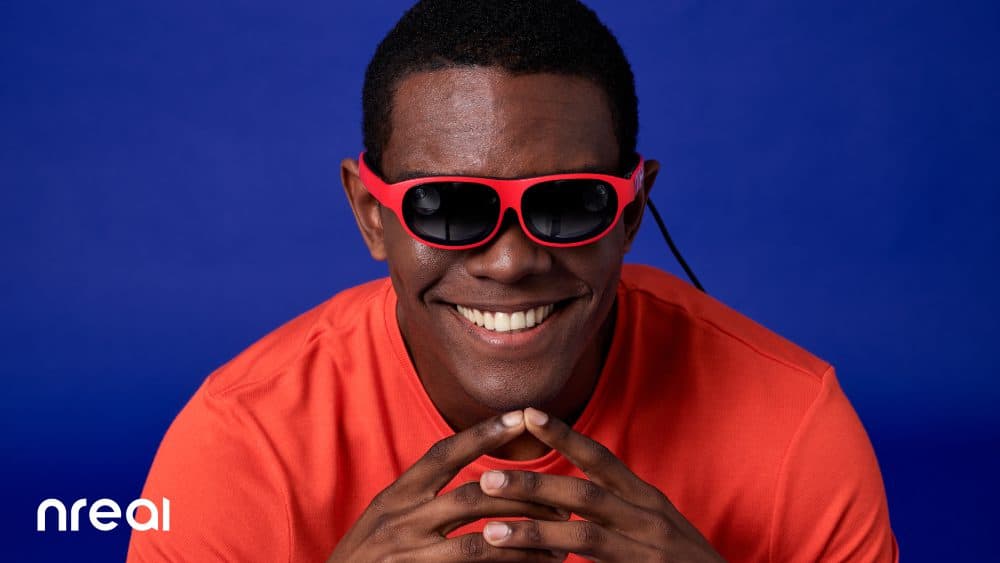 Let’s sum up our experience with the device. Small, lightweight, relatively stylish – there’s a lot to like in nReal’s AR Glasses. Weighing only 3 ounces, we found them comfortable to wear. Indeed, we could imagine wearing them throughout the day. It’s not a stretch to imagine them in the corporate world, though the dark shades and bright colors might take a bit of adjustment. The 52-degree field-of-view is not bad. We always want more, but it aligns with the specs of the new HoloLens and Magic Leap One.

As Charlie Fink wrote in Forbes,

It will be the first affordable natural looking glasses that do fully spatial computing.

Being first means living with some compromises. Which is why Apple never is. First, they’ll work with a Smartphone but probably not the one you have in your pocket. From Variety,

Nreal announced a partnership with Qualcomm at AWE, and a spokesperson said that any phone using the Qualcomm’s Snapdragon 855 processor would be compatible with the glasses. Compatible phones from Nreal partners include the Black Shark 2 gaming phone, the Oppo Remo 5G and the LG thinQ.

In other words, phones by Apple, Samsung, and Google are not compatible. And we doubt Apple will ever be with its own AR project underway. But if Samsung’s next-gen Galaxy 10 gets on board, it opens a decent size market.

But we like the idea of piggybacking off of your phone’s processor. We already have enough tech gadgets and cables – I don’t want to worry about keeping yet another one charged.

Second, nReal’s AR Glasses will live or die by the ecosystem they’re associated with. The developer kit version will be available for $1,199. But will developers leverage its spatial computing possibilities for the education and corporate sectors? If not, it becomes at best an expensive entertainment device. And at worst, glasses that only duplicate features on your phone.

Third, since the form factor is not based on a visor, you won’t wear them over your eyeglasses. That raises the cost and could be a detriment to adoption. A version with prescription lenses is much harder to sell if I don’t like them.

According to nReal, the consumer version will have a limited release this fall with full availability in early 2020. Their well-designed display at AWE was utterly mobbed, and the staff was knowledgable.

If you’re interested in spatial computing, these are AR Glasses to keep an eye on.