We’ve been waiting for a good AR in Central Park project, not that we get uptown than much (or even at all) with our hectic schedules this summer. Parks can easily become augmented reality playgrounds and art spaces as Boston has proven this year with the largest AR art exhibition in the U.S. With Central Park’s whimsical 19th-century mix of open and secluded spaces, it’s perfect for AR.

So we were thrilled to hear the news about Apple’s [AR]T initiative with its perfectly placed brackets in the title. And of course, it confirms what we’ve thought all along about Apple’s work in augmented reality. There may be delays in their AR project, but they’re not walking away from this. There’s just too much one can do here on both the commercial and cultural sides – which is the intersection where the company loves to stake out its own space.

Participants include Chicago-based artist Nick Cave, Swedish animator Nathalie Djurberg and composer Hans Berg, multimedia artist Cao Fei, as well as conceptual artist Carsten Höller. A bulk of the AR artworks ‘live as a visual layer on the cityscape and are experienced via a walk with an iPhone in six major cities,’ as described by Apple in an official announcement.

It’s a good group of artists and linking up with the now-very-innovative New Museum (which is where I began my art world career) is perfect for Apple.

We also like that the project includes workshops on creating augmented reality art using Swift Playground.

None of the artists involved have spent much time doing AR, so it’s an introduction for both creators and the public. 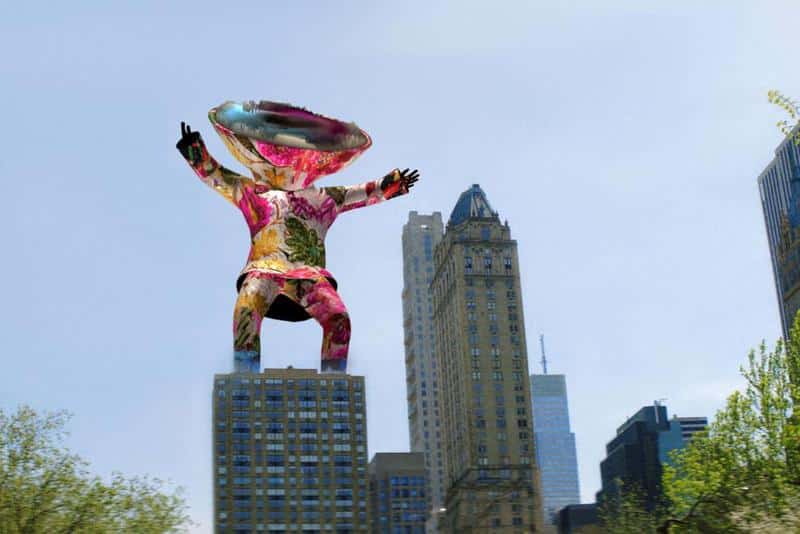 As good as Apple’s [AR]T Initiative is, there’s one little problem. Public access. Quoted in Wallpaper, Lisa Phillips of the New Museum says AR is

. . . ripe for dynamic and visual storytelling that can extend an artist’s practice beyond the studio or the gallery and into the urban fabric.

The question is, do we have to extend the studio or gallery control into the urban fabric? Apple’s approach results in only limited accessibility for the public. Unlike the Boston project, you can’t just go to Central Park, take out your phone and interact with the art. Indeed, you’ll be guided through the experience ten at a time with an Apple employee.

The democratizing impulse embedded in AR runs into Apple’s control everything approach. And perhaps the New Museum is also a little threatened – as any museum might be that focuses on contemporary art. What is the role of the art institution if artists can practice their craft in the urban environment? When they can create their own work and put it on public display for anyone with a phone (and in the future, AR Glasses), sidestepping the curatorial process?

The NY Times describes the tour.

In New York, the walk begins at the Apple Store at Fifth Avenue and 58th Street and heads straight into the park. Viewers are provided with headphones and an iPhone (the art on the walks won’t appear on just any old phone, and can’t be accessed outside of the tours). Along the way, in specific places, works appear onscreen against the backdrop of your surroundings.

For us, that undermines the very DNA of augmented reality. AR is about more than just spatial computing. It’s about openness, where the digital world is deeply integrated into our physical lived environment – and we’ll engage with our surroundings in new and creative ways.

Without having to sign up for a tour – unless you want to.

Just as the news media lost control of breaking news to Twitter, art museums will no longer be the sole source of access to art. That’s not to say they won’t have a role, but it will be very different than the one they have now.

Do It If You Can

But if you’re in NYC, do the AR in Central Park experience if you can. You’ll also find it in Hong Kong, London, Paris, San Francisco, and Tokyo. These are initial but fascinating steps to the way we will experience art – and our lived environment – in the future.

SIGGRAPH 2019: On the Cutting Edge of VR