Pillow Talk is not your average Wearable Technology device – it lets you share human heartbeats over the web. It’s not a heart rate tracker so much as a communication device. You’re listening to the heartbeat of someone you’re close to.

You can call it a “digital intimacy system” for you and someone you love.

Wired UK describes how it works:

The beat is picked up by a soft wristband, and then the rhythm and sound of the beat is sent over the internet to a speaker placed on their bed. The result, its makers claim, is ‘an intimate and engaging interaction between two people, regardless of the distance between them’.

With a set of headphones, you could also connect to someone during the day – which might be essential given different time-zones. 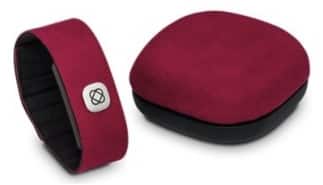 The Pillow Talk wearable is designed by Little Riot, an all female design group. Leader Joanna Montgomery did the initial concept while at the university in Dundee. It launched on Kickstarter November 10th and is looking for£131,000. Each unit will cost £52 and over 450 people have already signed on.

It falls into that small group of wearable devices that doesn’t even have a screen but still connects us to others. We’ll see more devices like this as the wearable technology revolution unfolds.

The Apple Watch can also connect us to someone else with its heartbeat feature, but it requires that you actively make it happen. Pillow Talk just resides quietly in the background, conveying the sound we so often take for granted . . . a beating heart.

Perhaps this is not so much a wearable technology device as it is a sensor-receiver setup in the rapidly expanding Internet of Things. That term is misleading as it will not just be objects talking to each other but people communicating with people, and things. An Internet of People and Things.

It’s hard to ignore the creepy factor and you’ll have your own take on it. There’s the obvious instance of use for military families or others who are widely separated by work or other obligations.

Though when you think about it, that intimacy for military families could backfire. Imagine if you heard your lover’s heart rate suddenly start racing while they were on duty overseas. It could simply be the result of a drill or exercise, or a bad dream. But you’d never know it from just listening to their heartbeat. And if the connection ended and you were thousands of miles away, what would you think?

And then there’s the other side of this question. Someone could use it just to listen to another’s heartbeat during the day. Obviously, it’s voluntary so perhaps privacy is not the main issue. But it still moves toward the line bordering on creepy. Context and intent may be everything here.

We had one guy who used to sit at his desk with his headphones in, listening to his girlfriend sleeping, . . . Which leads me nicely to the ‘creepy’ point… yes, some people do find it creepy, but 50,0000 people are still obsessively awaiting it.

If you’re interested, December 10th is the last day to support the Pillow Talk Wearable project. And yes, it reached its funding goal.

Virtual Reality Trends to Watch in 2016