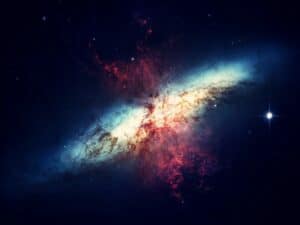 The SPHERES VR experience made news in the spring when it scored the million-dollar-plus deal at the Sundance Film Festival. That distribution agreement had us all guessing when and where it would show up. We got the answer today with its public release on the Oculus Rift HMD for $9.99.

SPHERES is a powerful example of storytelling in VR, and one of our favorite experiences. But it’s also significant as the kind of experience that could get younger students interested in STEM and related fields.

Every discipline incorporates stories – in this case, compelling stories of the mysteries of the universe. Sometimes those stories are based on hard evidence; other times, on our imagination. But as Carl Sagan once said,

Imagination will often carry us to worlds that never were. But without it we go nowhere.

The series is a three-part experience covering black holes, the sounds of the cosmos, and our own pale-blue-dot of a planet. As CNet describes it,

The experience takes viewers on atmospheric tours around the cosmos. One chapter, titled “Spheres: Songs of Spacetime,” has actress Jessica Chastain narrating (actually, whispering) your trip inside a black hole. If you don’t regularly spend your time pondering the mysteries of the universe, prepare to come out of your headset wondering what the heck you just saw . . . .

. . . . Spheres’ other chapters are Chorus of the Cosmos, narrated (well, really whispered) by Millie Bobby Brown of Stranger Things, and Pale Blue Dot, narrated (you guessed it: whispered) by punk-rock icon and best-selling author Patti Smith.

The film director Darren Aronofsky (he did “Requiem for a Dream” and “Mother!“) was the executive producer, and the VR experience was written and directed by Eliza McNitt. McNitt has a number of shorts and documentary films in her credits but has become a storyteller of our cosmos with the SPHERES VR experience.

She also has a special talent in bringing people together from diverse disciplines including science and music. It’s a stroke of genius to have Patti Smith’s soft yet gravelly voice narrate “Pale Blue Dot.” And to bring in Millie Bobby Brown as the voice in “Chorus of the Cosmos.”

In a conversation with Interview after her initial VR project, “A Fistful of Stars” (which places you up near the Hubble Telescope), Haley Weiss asked McNitt about the relationship between science and storytelling.

WEISS: You’ve said before that you think “science is storytelling.”

MCNITT: Absolutely. I think I connect to science as if it’s an artistic process, and the process of discovery in science is the same experience you have when you’re making a film, because it’s all about failing upwards and having that lead to these new discoveries. That’s certainly the experience we had with creating virtual reality film; there was a lot of failing upwards in order to get there.

We like that concept of “failing upward” – something to keep in mind if you are creating a VR project or shooting 360° Video.

Bridging the chasm between science and art

McNitt points out that at her high school, the Art and Drama departments were on one end of a large building while the sciences were on the far side. That helped enforce a sense of separation she’d like to overcome. A few VR experiences won’t overcome that conceptual chasm. Especially when it’s pushed as an either/or choice that often results in students ending up bewildered somewhere in the middle (my own experience). But science and art need to find common ground and the experiential nature of virtual reality might be the place to start.

We don’t buy into CNet’s implication that the SPHERES VR experience could be anything close to a killer app that VR needs (it doesn’t need one at all). But it needs quality content, and in this respect, McNitt’s work delivers a universe of it.