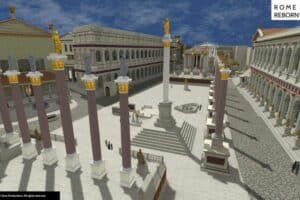 Ready to discover Ancient Rome through virtual reality? Take a look at the new version of Rome Reborn. It’s an international project dating back to the mid-1990s. But VR has finally caught up to the vision of the people behind it.

Sometimes technology leapfrogs ahead; other times, we’re waiting for the tech to catch up with us.

Here’s the quick description of the project from the Rome Reborn site.

Rome Reborn®  VR utilizes version 3.0 of the highly acclaimed 3D digital model of the ancient city created over the past twenty years by the Rome Reborn® Project, an international initiative dating to the mid 1990s whose goal is the creation of 3D digital models illustrating the urban development of ancient Rome from the first settlement in the lBronze Age (ca. 1600 B.C.) to the depopulation of the city in the early Middle Ages (ca. A.D. 550).

And why they selected AD 320 as the year to model the City in VR.

With the advice of an international scientific advisory committee, the leaders of the project decided that A.D. 320 was the best moment in time to begin the work of modeling. At that time, Rome had reached the peak of its population, and major Christian churches were just beginning to be built. After this date, the capital of the empire left Rome for Constantinople and so few new civic buildings were built. Much of what survives of the ancient city dates to the period around A.D. 320, making reconstruction less speculative than it must unavoidably be for earlier phases.

Version 1 didn’t arrive until 2007, a decade after the project got underway. But it’s the just-released version 3 with its VR capabilities that interests us.

Created by Flyover Zone Productions, the Ancient Rome in virtual reality experience is available on your web browser and in 360° video. It was just released on the Steam Store for the HTC Vive VR headset.

A short promo video was released earlier this summer covering the Roman Forum.

You have to credit everyone behind this project for their undeniable persistence. Starting this in the 1990s long before it made any sense to render Ancient Rome in virtual reality for the public is remarkable. And it was a critical step to pivot the project to adapt to the consumer VR headsets of our decade.

The project encompasses over 7,000 detailed virtual buildings covering an area of 14 square kilometers. You can fly over an historically accurate version of the ancient city, yet drop down to street level. It’s not nearly as smooth an experience as moving around in Google Earth VR – which should be the gold standard for these experiences. But it’s a close enough approximation for now.

Still, there’s a lot to like here. The time warp feature lets you toggle between the virtual reconstructions of the building and the ruins that are left in modern-day Rome. It’s utterly fascinating to see the reconstructed buildings.

And the interiors of some of the structures are coming online, such as The Basilica of Maxentius. There’s not a large number now, but more will arrive as the project continues.

With the massive focus on medical and industrial uses of VR, historical and archaeological applications get buried under the marketing hype. But there is so much potential in these fields for the use of augmented and virtual reality. We’ve seen some early projects such as the Lithodomos VR App. But it covers only a few buildings in Ancient Rome and other cities.

Recreating historical sites in VR will be essential for education but equally important for entertainment and tourism. How many tourists visiting the Roman Forum actually understand and appreciate what they are looking at? And the Forum is in good shape (relatively speaking). They could be staring at a pile of rocks with nothing more than a faded sign explaining the significance of a site.

Once we get AR Glasses, it opens up an entirely new way of experiencing the world. Soon, we’ll be able to select the timeframe for the world before our eyes. I can see it as it is today – or dial back hundreds or thousands of years to experience what it was like in the past.

At least, that should be the ideal. The reality may be entirely different. And the main challenge will be funding. It shouldn’t take almost 25 years to get a version of Ancient Rome in virtual reality. Literally, one city! Especially when we get the entire world in Google Earth VR in only 5 years (it began as a “20% project” in 2013). Granted, reconstructing the past is harder than appropriating satellite image datasets. But it’s also a question of priorities and funding sources.

History lurks not just in our historical and archaeological sites, but everywhere we walk in our day-to-day lives. VR and AR could make that a reality. And we need that historical context more than ever.