Who does not want to go to Mars, one of the most  interesting planets in our solar system? With virtual reality travel you can stand on the surface of the red planet and still be home for dinner. Advancements in Virtual Reality technology will make a virtual trip to Mars a reality for scientists and students alike. And it will give the public a firsthand and a very immersive experience of space exploration.

Earlier this year at the Sundance Film Festival I did the Martian VR Experience directed by Rob Stromberg in collaboration with movie director Ridley Scott’s RSA Film and the Fox Innovation Lab. The 20 minute experience takes you through 3 major scenes – landing, riding on Mars and finally, lift off. My favorite part was riding the rover over the rugged Martian landscape.

In addition to the Oculus Rift headset, the experience is designed to use a special chair and maneuvering the rover with a joystick. The ride over the rocky surface is incredibly bumpy and deeply immersive. The visuals are breathtaking and the sense of presence heightened to such a degree that several times I had to remind myself that I was still on planet Earth.

The additional game elements that required you to complete a set of tasks in each scene brought a level of interactivity still missing in most VR experiences. It was as close as I’ve ever been to experiencing space and alien worlds. 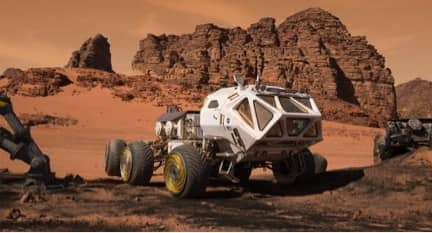 Following the release of the VR experience earlier this year Chris Milk, the VR producer and founder of Vrse noted:

“This is the largest, most forward-thinking and innovative project that the studios have done to date,” said Milk. “For one, everything [has been] done as a marketing vehicle for a larger tentpole movie. Whereas this — while it’s connected to the film — it is a long-form, standalone piece of immersive entertainment.”

The VR Martian experience is designed as entertainment. But more recent developments with Microsoft HoloLens provide the foundation for science and virtual experiences to work together. They not only feel out of this world but also propel discovery.

A new exhibition opening doors this summer in NASA’s Kennedy Space Center Visitor Complex in Florida will give visitors another chance to virtually travel to Mars.  The project is made possible by NASA Jet Propulsion Laboratory (JPL) scientists with the help of Microsoft. Visitors wearing HoloLens will be able to explore the red planet with tour guides as holograms of Apollo II astronaut Buzz Aldrin and rover driver Erisa Hines. They will lead the tour in a mixed reality interactive exhibit titled “Destinations Mars.” The pilot project was tested with a limited audience in San Francisco in April. “We didn’t concoct this environment for people to look at,” Dr. Jeff Norris, lead mission operations at JPL told Engadget.

Here’s the preview for “Destination Mars.”

Microsoft’s goal for HoloLens is to go beyond games to interactive virtual travel and its purposeful use for scientific investigation. It’s already helping astronauts and researchers prepare for a real mission to Mars.

NASA and JPL are leveraging the capability of HoloLens to create a “Mixed Reality” environment – one that incorporate elements of our world with a virtual recreation of the Martian surface. Using OnSight, a NASA and Microsoft developed software tool, researchers no longer study images of Mars. They can use holographic teleportation to examine the planet’s surface from a first-person perspective. The 3D terrain is rendered through images received from the Curiosity Rover as well as orbiting satellites.

A key advantage of the holographic teleportation is the ability to do virtual travel. Scientists from different locations on earth can literally meet in the simulated Martian environment to discuss and plan new missions. ProtoSpace, the latest JPL application, superimposes a computer-generated version of space hardware over the user’s field of view in the HoloLens headset. This allows engineers to design and test their designs. Currently, the ProtoSpace app is helping scientists develop the 2020 rover.

There’s a number of projects underway that will provide different forms of virtual reality travel to the solar system and here on our own planet. Microsoft HoloLens and Meta Smartglasses are working in the AR and Mixed Reality domains. In the background lurks the most interesting company, Magic Leap, that promises a highly realistic experience without the bulky headgear. While mixed reality will provide a powerful collaboration platform and tools for scientific research, virtual reality will provide all of us with the deeply immersive experience of “being there”, on a planet millions of miles from earth.

The work of NASA’s JPL with Microsoft HoloLens is truly inspiring. It offers us a glimpse of the applications and benefits we can expect to see in the next few years in fields ranging from medicine to scientific research. The technology behind virtual reality travel will not only transform the way we learn, work and entertain, but make us all explorers of the solar system.

At some point in the future, astronauts will land on Mars and we will be by their side through a live virtual reality stream – virtually experiencing their first momentous steps. And like them, we will pause and look up into the Martian sky . . . and see a very faint and fragile point of light we call home. 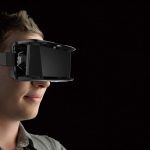 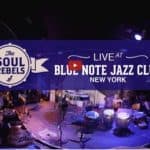