Can virtual reality save wildlife? It’s a great crowdsourced idea coming out of Tongal, a video-content studio. It’s a little beyond the current capabilities of VR today, but only today. The technical capabilities of VR are changing so rapidly it may soon be a solution.

In some cases, it our only solution.

Most of us experience wildlife behind fences or raised in “large” aquariums. You get close, but at the cost of their well-being. We see bored animals, or ones trained to do tricks for us. Nearly everything they are instinctively inclined to do has been taken away.

Sometimes the conditions are heartbreaking, as the public found out with Blackfish, the critically acclaimed 2013 movie on the Killer Whales at SeaWorld. It was SeaWorld’s worst media nightmare, from which they’ve yet to recover. It was the Killer Whales’ worst nightmare ever since the day they were born.

With all the experiments underway in VR, why not use the medium to experience wildlife in its natural habitat? Leaving aside captive breeding programs needed for nearly extinct species, there are incredible opportunities here.

You can already get close to sharks through a number VR apps. Just hold up Google Cardboard or Samsung Gear VR and you have a rudimentary virtual shark dive. You’re locked into a single location, the images blurry, but it’s still an amazing experience.

The ocean as your real-life shark tank 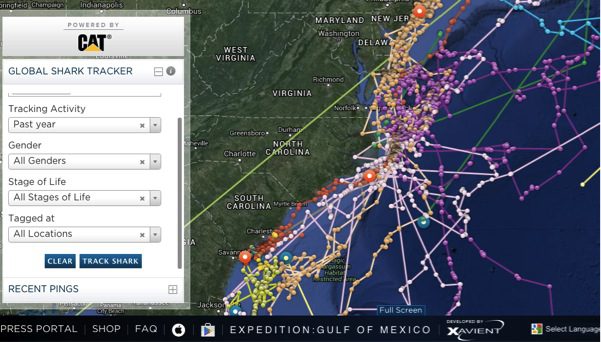 Ever since Ocearch began its shark tracking program, I’ve been amazed watching the data pour in. The tagging operation is an incredible achievement, nearly impossible five years ago. But the data is still rudimentary, transmitting only location and a few other data points when a shark surfaces.

Now imagine tagging sharks with small GoPro-like VR cameras instead of pinging devices. And once we solve the power/battery challenge (we will), you’ll experience live streaming VR from the back of a shark.

Soon, we’ll have the experience of swimming next to a Killer Whale or shark. Or walking alongside a herd of elephants. And it may also help with funding conservation efforts and stopping illegal poaching.

Can Virtual Reality Save Wildlife?

Take a look at the White Rhino. There are only three left in the world. Only three.

As I write this, the sad news just came that the fourth one, Nola, the beloved resident at the San Diego Zoo, has passed away. The other three live in the Ol Pejeta Conservancy in Kenya. They’re protected 24 hours a day by armed guards who sleep by their side.

Literally. That’s how desperate the situation is.

Enter two filmmakers, Kel O’Neill and Eline Jongsma, who raised money through a Kickstarter project to fund a virtual reality film about the last of the species. Right now, there are no solutions for preserving them, but a VR experience might raise funds to research a new solution. At the very least, it will preserve an experience of them for future generations.

Simon Parker followed up on their work in the MIT Technology Review:

Virtual reality, the documentarians believe, gives viewers ‘the most direct experience of the story possible.’ Sam Watts, a virtual-reality producer for Make Media, agrees. ‘One of the key strengths of the medium is its ability to create a true feeling of empathy for a particular subject, by allowing the user to be fully immersed within the scene and story that is being told,’ he says.

Virtual reality can place us side-by-side with animals in their natural environment. And if we have to lose them, at least we’ll have something more than static images or single perspective video.

Is there a future for SeaWorld?

Is there a future for a SeaWorld? Why note something like The Void, the virtual reality entertainment facility opening now in Utah? With state-of-the-art VR, you might have an experience you could never have at the current SeaWorld. Or at home with consumer VR.

In a few years, sitting in the bleachers watching a Killer Whale jump in a pool for a mouthful of dead fish might seem positively barbaric. Virtually “swimming” with one in the pacific ocean might be a heart-pounding experience.

It often seems that modern society removes us ever further from the natural world. But with virtual reality we might find ourselves immersed in nature once again, face-to-face with the very animals that we once kept inside fences. That we gawked at in aquariums and zoos.

That is, when we didn’t just exterminate them all together. Rest in peace, Nola.

1 thought on “Can Virtual Reality Save WildLife?”