If there was a single Mixed Reality demo that intrigued us, it was the Magic Leap whale. Remember? It was one of Magic Leap’s tantalizing hints of what their secretive project would bring. A very large whale jumping out of the floor in a gymnasium full of astonished kids.

Of course, it was all quite fake as the children were reacting to a Mixed Reality object even though they weren’t wearing Magic Leap Ones – or any Mixed Reality HMDs. No matter, we were all sucked in until the news appeared later that some of the demos had been completely faked.

Well, now the whale has arrived. From Next Reality,

Nested within the Helio web app, the demo allows you to put a sperm whale in your real-world space. When I gave it a try, it turned out that the experience demanded a much larger space (no shrinking this experience down).

But fear not, a few users, like the one in the video below (who had to go outside to demo the experience), have uploaded their attempts at conjuring the AR whale on the Magic Leap One.

The version from Magic Leap One HMD is good, though clearly not what the original promised. A very large whale swims around in a space in front of you – no jumping out of the floor or impressing non-headset wearing bystanders. Too bad. But technically, they were never going to pull that off anyway. 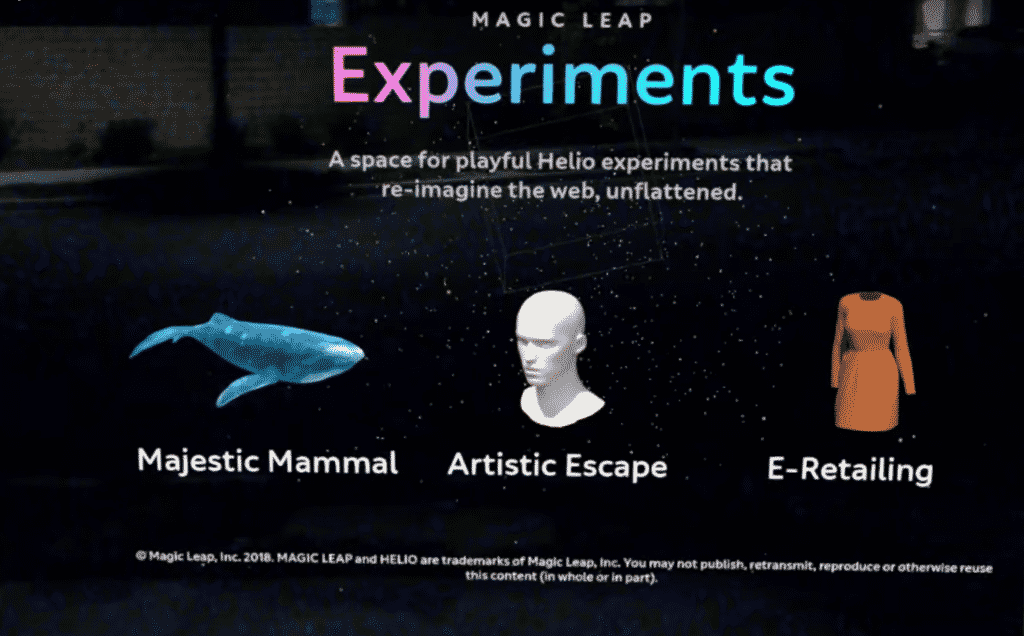 On a positive note, it’s a great opportunity to see the quality of the digital objects in the Helios Web App. And the whale is realistic if one-step-short-of-neon-bright in contrast to the dark surroundings. It’s definitely not in the same league as the (non-AR video rendered) whale of the original demo. Call it a more vivid version of what you’d get using Microsoft HoloLens which the ML1 is going up against.

There’s the obvious potential here in education, retail, and other areas to create engaging experiences. Right next to the whale is an Artistic Escape along with an E-Retailing experience as part of the Magic Leap Experiments section. At the moment, the Helios Web App is one of the most exciting parts of the HMD.

We’ve come a long way these past few years. Just wearing a comfortable pair of (slightly oversized, steampunk) glasses and we have digital objects blending into our real environment. Spatial computing is here if a little rough around the edges.

And for what it’s worth, we finally get to see the Magic Leap whale.