The CNN Magic Leap app is out, and we’re underwhelmed. You’ll be able to pop on your Magic Leap One headset, sit down at your breakfast table and . . . watch the news.

Seriously. And that is exactly what you can do now with your Smartphone, tablet, or wall-mounted large screen display.

The problem here is not Magic Leap which is releasing some amazing Mixed Reality experiences. Their collaboration with Wetta Workshop on Dr. Grordbort’s Invaders is a deeply engaging gaming experience with virtual portals in your walls and robots in your room.

The tech is there to do a news app in Mixed Reality but CNN either lacks the vision or didn’t want to commit the resources. You get a virtual screen with the news but none of the potential of what the Magic Leap One HMD can do. 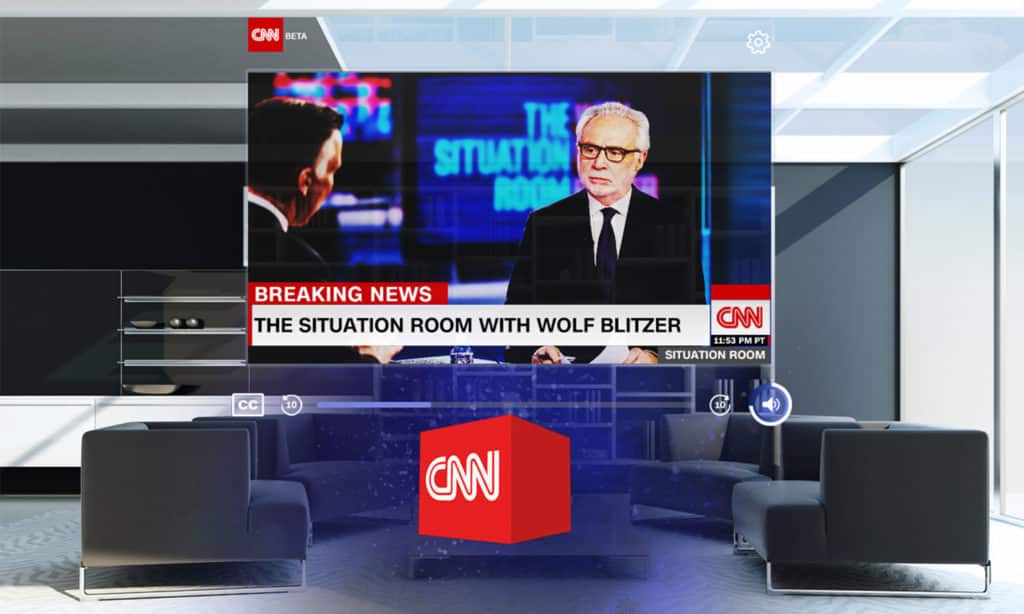 The only way the CNN app might be useful is if you were rushing around your house doing chores and absolutely needed a free-floating virtual screen with Wolf Blitzer in front of you the entire time. Though that sounds like an accident waiting to happen.

In fact, we’re confident that VR and AR will be added to home accident statistics reports in the near future. Prediction: AR will take the lead here. Household items are always more dangerous when you have the illusion of total control.

CNN helpfully released a video promo for the app which doesn’t help at all.

The video is as poorly designed as the app, especially when the woman leaves the Magic Leap One on the counter (still running) and rushes out the door to catch her flight. It would have made more sense if she took the device with her and continued watching the news in her Uber. But of course, that wouldn’t work since public wifi is so hard to come by in the States.

Ultimately, the CNN Magic Leap app fails as it adds nothing of value to our current experience. You’ll have a significantly wider field of view if you’re not wearing a Mixed Reality HMD. And with the cost of the device, you surely wouldn’t buy it just to watch traditional media.

As Engadget notes, the isn’t CNN’s first attempt to use immersive technologies. A year ago,

. . . the network debuted a VR app for Oculus Rift this time last year. Competitors are working with the technology, too. NBC has partnered with Google on VR “experiences” and dabbled in Olympic coverage, and Fox Sports VR lets you turn your living room into a stadium suite, sort of.

For the most part, the networks have only dabbled in VR and AR. Design challenges and figuring out ways to monetize content have restricted what the apps can do.

In fairness to CNN and Magic Leap, more features will be released over time. And it will become interesting when you can grab a segment of the broadcast with your hand controller and explore an issue further. Or if you could step into an immersive environment.

This is where it has potential down the road. Let’s spin that scenario out for a moment.

You’re watching a broadcast in Mixed Reality on getting aid to Venezuela, and there’s a scene of a border checkpoint. A quick click of your controller and you suddenly find yourself standing inside the story. On one side of your kitchen are troops loyal to Maduro blocking aid and over by your living room, desperate Venezuelans wait for assistance. When it gets tense, virtual rocks and bullets start to fly past your head.

That would be profoundly compelling and leverage the possibilities of Mixed Reality. With that, the woman in the video would have every reason to put down her Magic Leap One HMD and run out the door. From consumption to experience – this is where Mixed Reality becomes a game-changer for news media.

So perhaps the CNN Magic Leap app is simply far too early – before its time. But there’s a lesson here in releasing an immersive app that is, well . . . not in the least immersive.

The potential for Magic Leap and Mixed Reality is clear. It will transform broadcast news as we know it. But jumping in when all you can do is replicate what is better done through traditional media displays can be worse than doing nothing at all.

It’s a cautionary note for anyone experimenting with immersive technologies.

Is HoloLens 2 Really a Breakthrough Devi