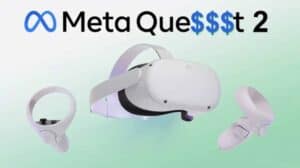 We hope you bought a Quest headset recently since if you didn’t, you will find yourself paying significantly more. Meta announced Quest price increases of $100, making the 128GB headset $400 and the 256GB headset $500. That still leaves the Quest cheaper than other options but not much. The new prices go into effect on August 1st, so you still have a few days to grab one. With the increase in Quest prices, no additional features are included though Meta will – for a while – give you the popular Beat Saber game for free.

That may soften the price impact for consumers, but it’s hardly an incentive for education and workforce training projects that have little use for the game.

We’ve been all-in on VR since the early days of PC and mobile, all the way through to today’s premium standalone 6DOF headsets–and we’ve invested billions of dollars to help nurture a thriving VR ecosystem. Now, we’re making a change that will help us continue to invest for the long term and keep driving the VR industry forward with best-in-class hardware, action-packed games, and cutting-edge research on the path to truly next-gen devices.

We noted our concerns about Meta’s financial woes and their plans to take a nearly 50% cut from developers creating Metaverse content. While Meta can say they have been “all-in on VR since the early days,” the reality is that they are bleeding money when it comes to XR. There has been frequent speculation on how much Meta was subsidizing the Quest, and clearly, it was too much.

Besides subsidizing a popular device, Meta is undoubtedly looking at Apple’s XR initiative. We have no sense of what Apple will release, but it will likely cost upward of $1,500 (possibly closer to $2,000). In other words, there’s little point in keeping the price so low.

What It Means for Education and Other Organizations

Price increases of this magnitude are never good for education and nonprofit organizations when it comes to emerging technologies like XR. But the use of the Quest slowed significantly over the past two years due to the Facebook account requirement, which is now being eliminated.

Over the long term, we see the Quest price increase as good news for XR as it should spur the development of alternative standalone HMDs. Meta has had a near lock on the VR headset market, and we need the competition. But in the short term, we’ll be paying significantly more to fund our XR initiatives.

If you were planning to purchase Quest headsets this summer, move fast and do it before August 1st.