Meta’s new safety feature that adds personal boundaries for virtual avatars is welcome news. It creates a personal barrier around your avatar to prevent other avatars (people) from getting too close. Unfortunately, there are just too many instances of individuals being harassed in virtual environments not to implement this. Even better, using the personal boundaries for avatars is the default setting. You can turn it off if you like, but you don’t have to dig for it in the first place.

Here is the short description of how it works from the Meta Quest blog,

A Personal Boundary prevents anyone from invading your avatar’s personal space. If someone tries to enter your Personal Boundary, the system will halt their forward movement as they reach the boundary. You won’t feel it—there is no haptic feedback. This builds upon our existing hand harassment measures that were already in place, where an avatar’s hands would disappear if they encroached upon someone’s personal space. 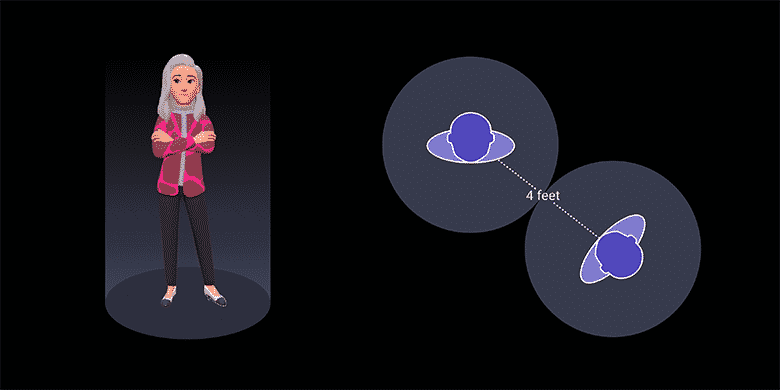 A few more elements in the feature:

There are several limits to the new feature. For now, you’ll have to live with the four-foot distance – there’s no way to customize the amount of space around you. And it’s only available in Meta’s Horizon Worlds or Horizon Venues.

About That Lack of Customization . . .

That lack of customization reveals just how utterly primitive our virtual environments are in contrast to our lives in the real world. We constantly adjust our personal space around others through our eyes, body language, and what we say. Every conversation is a hidden negotiation of personal space.

In contrast, I have to click on a menu in a virtual environment. I’m tired of hearing how our virtual worlds are the “same as” real life.

In the future, customization of our personal space as a virtual avatar shouldn’t even be a setting but something we simply adjust on the fly.

Meta is Late to the Game

While Meta may tout their avatar boundaries as a new feature, they’ve been slow to address the ethical issues in virtual environments. No surprise, I suppose. They implemented hand harassment measures, but they’ve never had personal space for avatars. AltspaceVR implemented its own version – space bubbles – way back in 2016, nearly six years ago. Other virtual platforms such as Rec Room and VRChat (at one time the “Wild West” of VR) tackled the issue in years past to rein in harassment (especially of women).

Gyges Ring and the Metaverse

While the future Metaverse is still some years away, especially given Meta’s current challenges, Meta is finally recognizing the challenges it raises for human interactions. The social codes we rely on in real-life can lose their power in virtual environments where users can be anonymous and act without consequences.

It’s an old philosophical question first raised by Plato in the Gyges Ring story in the Second Book of the Republic. In the story, a poor shepherd discovers a ring that makes him invisible and uses its power to seduce the queen, kill the king, and become ruler of his country. The story is raised by Plato’s brother, Glaucon, as a challenge for Socrates: is justice nothing more than a social construct? Would any of us truly be just if there were no consequences for injustice? Glaucon bores into Socrates: everyone knows that the unjust life leads to greater power, pleasure, and profit. The rest of the Republic is Plato’s (or Socrates) very long answer to that question.

In many ways, the web and social VR platforms are a perfect setting for the tale of Gyges Ring. They offer space for people to act anonymously and without consequence. And the decades of the digital revolution have revealed people at their worst and their best. What Plato missed in his creative tale is that anonymity can be a powerful tool in the fight against injustice. But until we work out the ethical questions, the only immediate solution to virtual gripping and harassment is to embed our social codes in the platforms themselves.

Score a point for Glaucon and Gyges. But don’t worry, they haven’t won the tournament.

With their new personal boundaries for virtual avatars, Meta is taking a step in the right direction. But much more needs to be done before everyone feels respected as a human being in the Metaverse.