The nation’s preeminent sporting event will be different this year – short on attendees in the stands but big on cinematic video and augmented reality. While the Macy’s Thanksgiving Day Parade could focus on using 360 video for a shortened one-block long parade, Super Bowl LV is still the full game and will use multiple forms of video and AR to convey the experience. And there’s even a social VR experience if you want to go that route.

We’ll be watching closely to see how AR is used, and we’re sure the graphics will be fascinating. But don’t expect to see anything like what we were promised a few years ago on the AR space – more on that in a minute.

The Super Bowl has traditionally been a showcase for innovative technologies, and this year is no exception. CBS is throwing a full arsenal of video hardware into the game including,

There are many firsts here, including the Trolley Cam that will zipline up and down the field at speeds up to 65mph. It will be positioned as if you were seated around the eighth row of the stadium. Two Sony Venice Cameras will provide an on-field perspective with a short depth of field for a unique view of the action. And as Design News notes,

CBS Sports will also debut a 53-foot Movie Bird crane, which is traditionally reserved for major motion pictures and television productions. It will be located on the upper concourse to offer dramatic sweeping shots of the Super  Bowl Today pregame set and game action. The crane will also serve as one of the many augmented reality encoded cameras strategically placed throughout the stadium.

All of this is backed up with some serious infrastructure buildout, including multiple 10 GB fiber connections between Tampa and CBS studios in New York City and 1 GB connections to a private cloud for CBS staff working from home.

What you’ll hear in terms of audio will definitely be a simulated experience. The NFL is only allowing 22,000 fans (including 7,500 vaccinated healthcare workers) to see the game live in Raymond James Stadium. That’s hardly enough for the usual roar of the fans at an event like this, so crowd noise will be a mix of crowd noise from NFL films and those in the stands. Caught up in the game, viewers at home will likely not notice, and simulated audio is a longtime stable of broadcasting. But as we continue blurring the real and virtual, it raises ethical concerns for us when we start to blend both AI and VR into our virtual experiences. 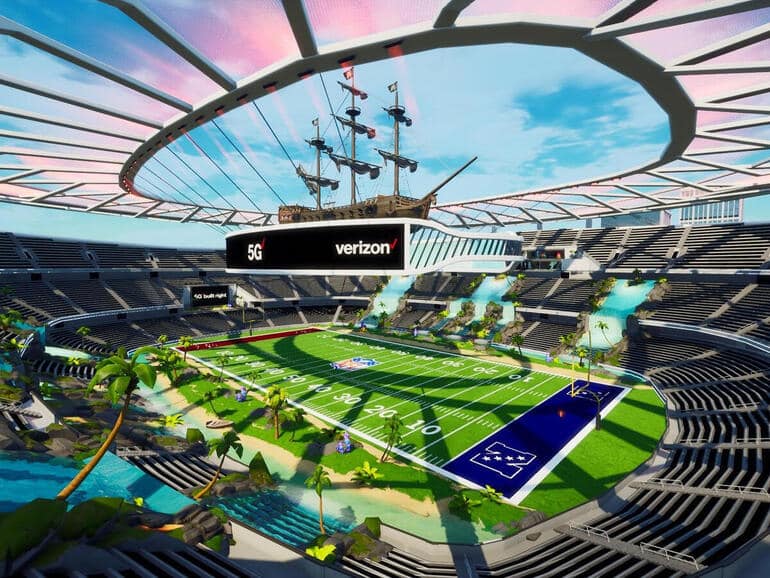 As for the augmented reality side of things, you can expect to see Verizon and CBS showcase their latest developments. AR will be used for enhanced graphics on your screen and in mobile apps for the game.

The NFL mobile app will grant iPhone 12 users access to the Verizon 5G SuperStadium, which offers in-person fans views from seven cameras, five viewing angles for at-home fans, and AR capabilities for the NFL’s Next Gen Stats, according to Verizon. In the Yahoo Sports mobile app, those so-inclined can use Verizon’s Watch Together feature (which the company describes as “a free co-viewing experience”) to “co-watch” the game with others. (TechRepublic)

To get a feel for some of the augmented reality possibilities, take a look at Yahoo Sports’ review of some of the iconic moments in previous Super Bowls. 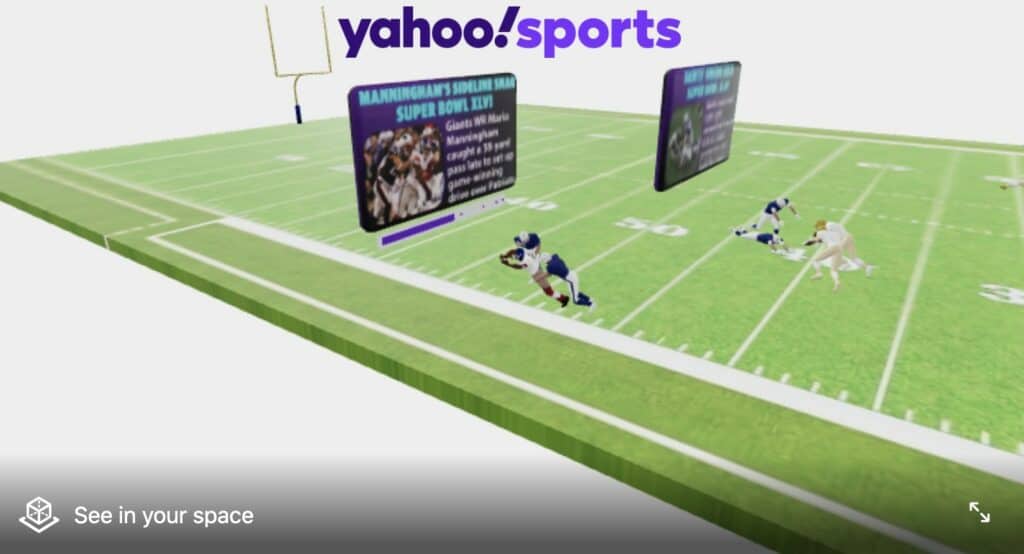 You can check out those game moments here or better, on your mobile device by scanning the following QR code: 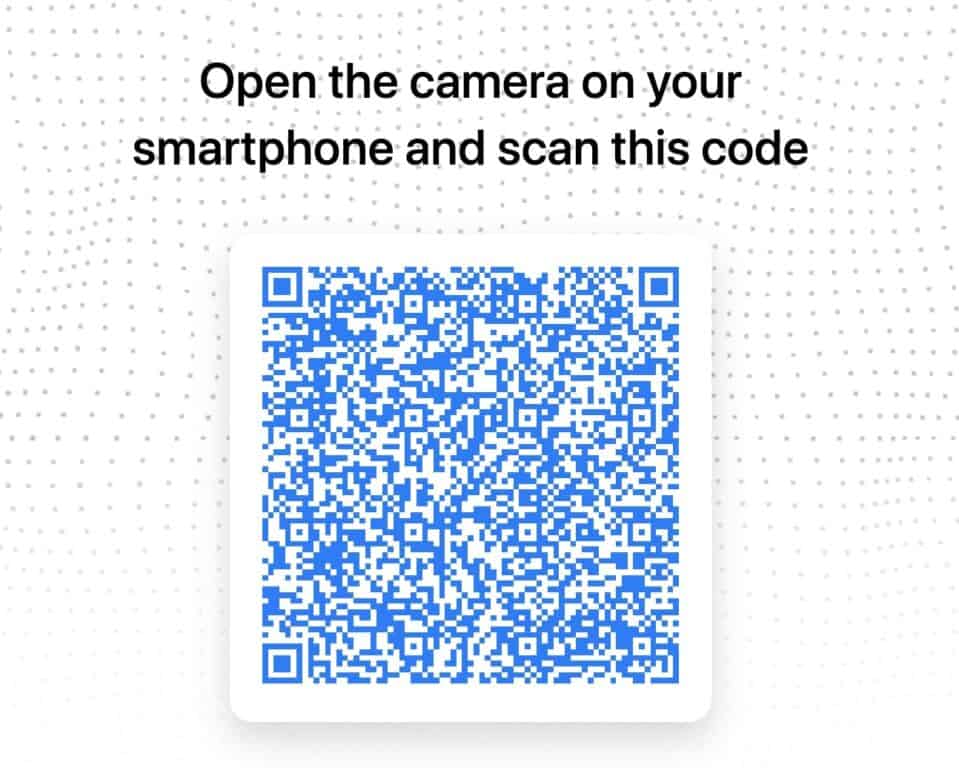 Verizon says it has invested more than US$80 million to enhance its network to support the Super Bowl, with Raymond James Stadium and the surrounding areas receiving ‘substantial’ 5G enhancements. This includes 70 miles of high speed fibre, an upgraded distributed antenna system (DAS), and 281 small cell antennas that will provide coverage at events in and around the stadium as well as Downtown Tampa, Ybor City, and the Tampa Riverwalk.

Obviously, that’s good news to hear. We just wish it was matched by the same kind of investments in our communities during a global pandemic when connectivity means everything in terms of jobs and education.

The Super Bowl in Virtual Reality? 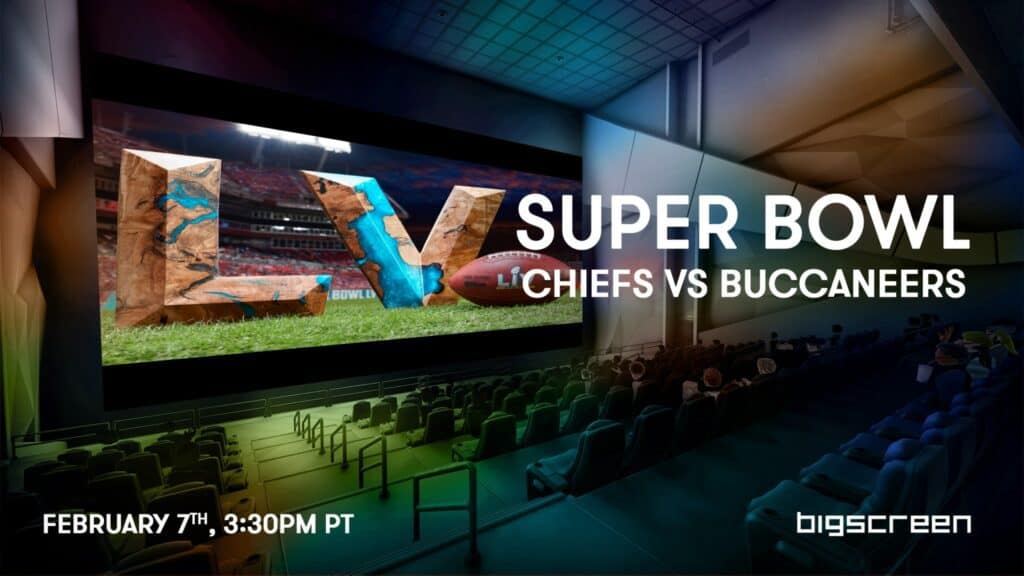 You’re not going to have Super Bowl LV in full VR this year, but you can watch it in your headset with family and friends with the social VR app, Bigscreen. We’re not fans of sitting around wearing a VR headset for hours on end to simply view an event on a larger screen. But it does provide a sense of co-presence and a safe social experience that avoids the dangers of gathering in person. To view the game in your own private virtual room, you’ll also need to download Bigscreen’s desktop app.

The Promise of AR Still to Come

Remember 2018? Long, long ago. That was when Magic Leap brought out basketball’s Shaquille O’Neal to showcase how we’d have sporting events on our tabletops and virtual life-sized athletes standing in our living rooms. It was a fascinating vision, but for all of what is happening at Super Bowl LV, we’re nowhere close to the promise of AR. Magic Leap and Microsoft both pivoted to enterprises use for Mixed Reality experiences, leaving the space to broadcasters and mobile providers such as Verizon. We’ll get there in the next few years once Facebook and Apple release AR glasses, but jaw-dropping AR experiences in sports and every other field will have to wait.

We’ll see what augmented reality can deliver during today’s game and be the first to let you know when we see those promises begin to materialize.