Take a look at the AR moon landing app, a project from The John F. Kennedy Presidential Library in Boston. The app commemorates the upcoming 50th anniversary of the Apollo 11 trip to the moon and President Kennedy’s commitment to getting us there. There’s no complex science learning here, but it could be an excellent tool for K-12 STEM programs. And of course, for anyone with interest in how the mission took place.

What intrigues us is that this AR app does the event in real time. You can locate an AR model of the rocket in your living room now. But it won’t lift off until July 16th – 50 years after the original. And that will happen at precisely 9:32 am in the morning. The augmented reality trip will take the same 120 hours before touching down on the lunar surface. Part of the compelling nature of VR and AR experiences is that they can shift or compress time. But there’s an opportunity to “live” a virtual experience, replicating the same amount of time as the original event. 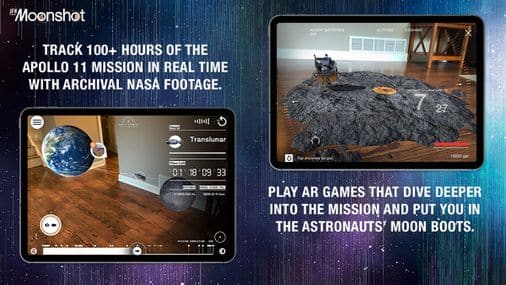 Here’s the description from Variety.

The app has been created by digital marketing agency Digitas, which began working on the project together with the JFK Library around a year ago. Digitas vice president Mark Philip said that his team was looking to stand out from the numerous other documentaries and apps celebrating the iconic mission: “We thought: How can we celebrate it in a way that hasn’t been done before?”

The result is a unique app that combines AR technology with both location and a real-time component. After installing the app, users can put a digital overlay of the Saturn V rocket onto their living room carpet, and test the thrusters to see the spacecraft burn some fuel — but the actual mission won’t begin until the day of the 50th anniversary. “On 9:32am on July 16, the rocket will launch, just like it did 50 years ago,” said Philip.

And just like the real mission 50 years ago, the AR version will last more than 120 hours, and commence on July 20 with a touch-down on the moon surface — think of it as a recreation of the entire mission in real time.

Killing Time on a Long Flight

The excitement of the launch and landing are bookends to some tedious hours. Unless of course, you were a member of the original crew. To keep the 120-hour flight exciting, Digitas has incorporated media content from the Library’s archives. In addition, once you get to the moon on July 20th, users will be able to try landing the lunar module themselves. The interactive aspect makes it both an AR game and a documentary.

By combining location-based AR, live streaming and educational games in the JFK Moonshot app, Digitas ultimately aimed to broaden the definition of documentary filmmaking for a mobile-first generation, said Philip. “An AR experience can be a documentary,” he said. “Who says a game can’t be a documentary?”

If You’re in Boston this Summer

It’s too bad the lunar mission didn’t happen during the fall when the school year is on. It seems ideal for bringing a historical moment to life for middle school students. But if you’re in Boston this July, it may be worth a trip to the JFK Library where the app will reveal a life-size 363-foot replica of rocket and the launch.

While you’re in Boston, be sure to check out the extensive AR art exhibition on the Kennedy Greenway. The city is becoming a center for augmented reality projects this summer.

If you’re using the AR Moon Landing app at home, you’ll have to settle for a smaller version of the Saturn V rocket. In the image below, I’m testing the thrusters before next month’s liftoff on a table in my office. 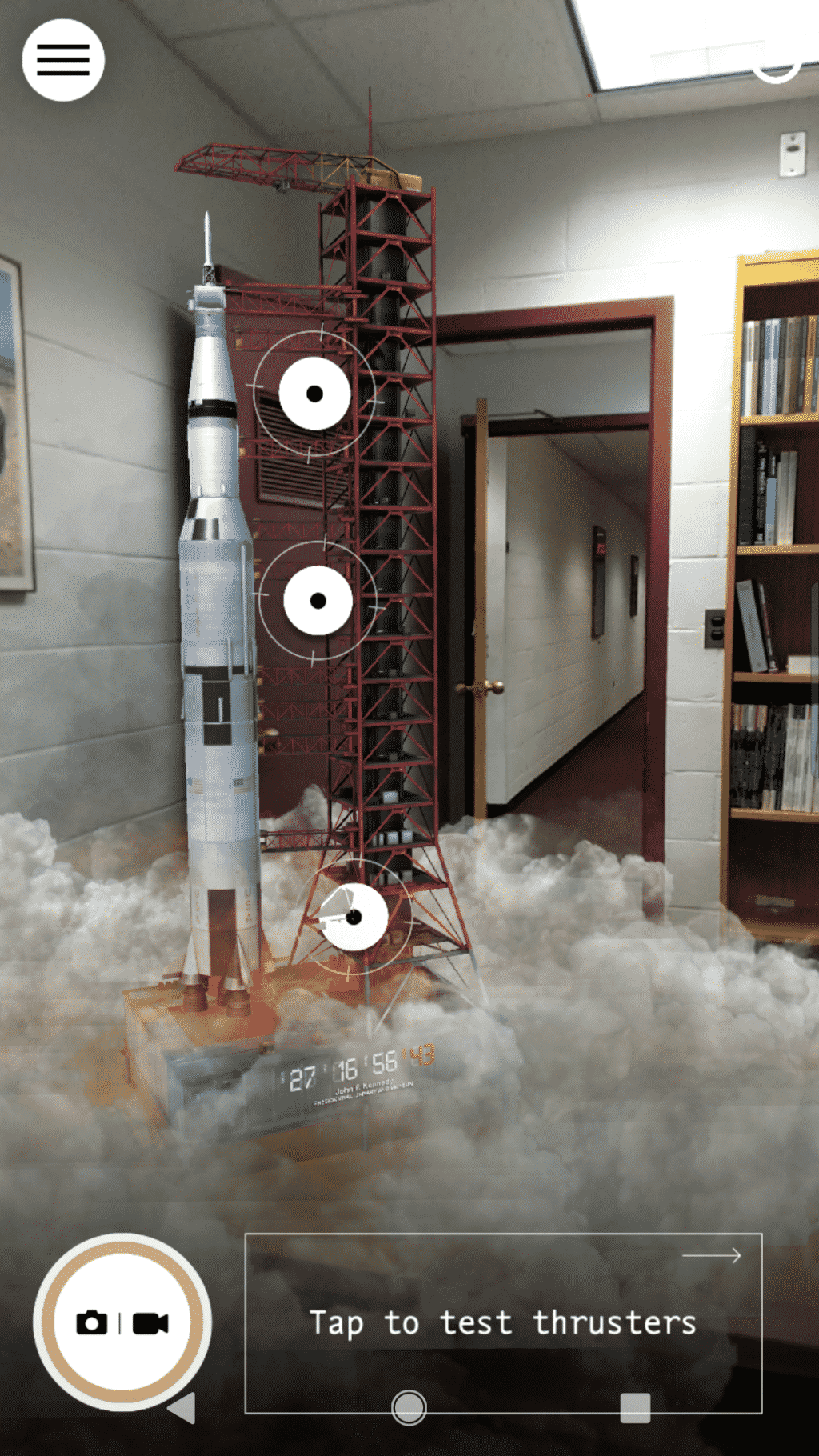 We have one minor fault with the Moon Landing app. It would be better if you could permanently anchor the rocket and launchpad to a specific location. As it is now, you have to reset it each time you open the app. That’s fine for transitory AR experiences. But it makes less sense when the experience incorporates real-time duration.

In the fifty years since Apollo 11 left for the heavens, the world has changed profoundly. For a quick measure of how fast the technology is changing, compare what done for the 40th anniversary celebration. There was no AR app on your phone. Instead, as Wikipedia relates,

On July 15, 2009, Life.com released a photo gallery of previously unpublished photos of the astronauts taken by Life photographer Ralph Morse prior to the Apollo 11 launch.[221] From July 16 to 24, 2009, NASA streamed the original mission audio on its website in real time 40 years to the minute after the events occurred.[222] . . . In July 2010, air-to-ground voice recordings and film footage shot in Mission Control during the Apollo 11 powered descent and landing was re-synchronized and released for the first time.[224] The John F. Kennedy Presidential Library and Museum set up an Adobe Flash website that rebroadcasts the transmissions of Apollo 11 from launch to landing on the Moon.[225]

We have no doubt, as Elon Musk has predicted, that our next journey to the moon will be live-streamed in VR. Until then, download the AR Moon Landing and enjoy the liftoff from your home or office. The app is available on both iOS and Android devices. This time around, you can be wherever you want to be for the 50th anniversary of this remarkable event.