There’s no huge surprise out of the WWDC conference so far, but Apple’s AR game shows what future holds. Even with AR limited to our phones and tablets (perhaps until 2020), we can still see how immersive tech will engage us. Our current technology paradigm is static, a passive use of technology where we read, view and respond to social media. Augmented Reality is experiential – you react to it, you engage with it – even when it appears on your mobile screen.

The iOS framework that enables these apps, ARKit, got an update announced today at Apple’s WWDC, and with it comes multi-person AR software. It’s a really interesting feature that opens up a ton of new possibilities for gaming, education software, and a number of other situations in which having a shared virtual environment might be useful.

To showcase the feature here at the San Jose Convention Center, the company set up a few of its elongated, trademark wooden tables (seemingly straight from an Apple Store) that acted as a barren surface for the AR environment to populate. The demo pit up to four people against one another on teams of two in a game called SwiftShot. Effectively, it was a competitive slingshot game that demanded players use an iOS device to aim and fire pellets at the enemy team’s base, with the goal of knocking off all three pillars for a victory.

The game . . . was also surprisingly fun. Like the best augmented and virtual reality games out there, it really got you on your feet and moving. You couldn’t simply stand still, aim, and fire with the iPad in one static position. You had to change your elevation, your angle, the depth and distance between you and the slingshot you were using.

Here’s a video of the gameplay (for more commentary on the game and what Apple is doing, check The Verge video).

Apple’s competitive slingshot game is fairly rudimentary. Nothing much beyond some superficial gameplay. But it’s a sign of what’s to come as AR platforms and creation tools become more sophisticated.

Virtual environments with persistent objects and shared experiences will have a profound impact on gaming, learning, and entertainment. The new paradigm of technology will immerse us in digital environments, blurring the boundaries between the virtual and the real. A future generation will laugh that we sat down to use technology or even held it in our hands.

For now, we’ll have to live with AR on our phones and tablets. But soon enough, it will be in a wearable. And the entire world will be transformed.

In the end, it will bring us back to John Dewey’s awkwardly phrased but deeply relevant insight.

Give the pupils something to do, not something to learn; and the doing is of such a nature as to demand thinking; learning naturally results.

The challenge for us in implementing AR in the learning environment will be not to use augmented reality to add to the “something to learn”. We have enough of that already. Let’s use it to create experiences that will “demand thinking”. And when that happens, learning will be transformed. 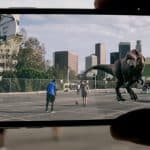 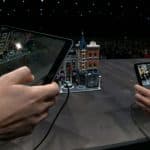