With all the news on Virtual Reality this week, it’s easy to miss the developments in wearables and fashion. Some of the designs sound straight out of science fiction – clothing that serves as a lie detector, reveals your emotions, or makes you invisible. Yes, Harry Potter, I’m thinking of you.

But what was once sci-fi can quickly become part of our lives. As Innovate UK notes:

Here’s a glimpse of some of the ideas being played with at London College of Fashion’s new Digital Anthropology Lab:

Think the pace of change is not that fast? Gartner estimates that the Internet of Things will grow by 30% in the coming year – to 6.4 billion connected devices.

That means people will be adding 5.5 million new objects to the Internet of Things every day . . .

And fashion will leap into this expansion of the digital realm. So get ready to think of your clothing as a digital skin. Platforms for sharing and connecting with others. We’re not going to spend the rest of our lives staring at Facebook and WhatsApp on screens. 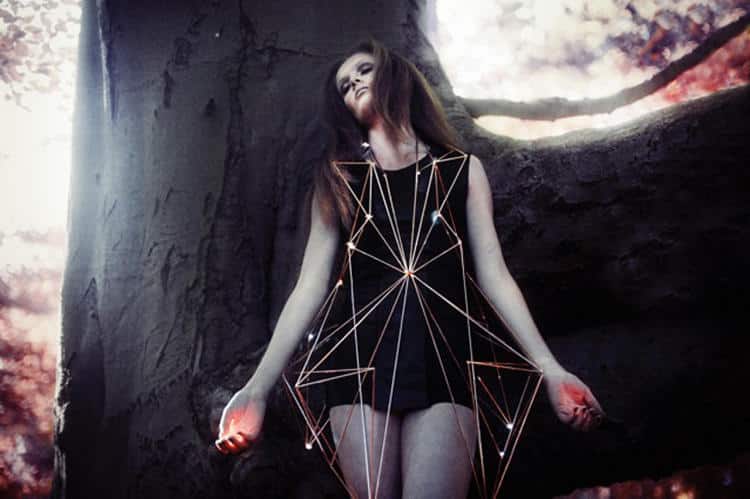 With the New York Fashion show almost upon us (just 13 weeks), you’ll have an opportunity to see some of these experiments at the upcoming Pratt Institute exhibition, “Coded Couture”.

Curated by Ginger Gregg Duggan and Judith Hoos Fox, the show moves beyond wearables as jewelry and wristbands to fashion that stands at the intersection of biology and social relations:

The show features work from designers who are working with biology, like Amy Congdon who explores tissue engineering; psychological coding, like Francesca Rosella and Ryan Genz’s garment that changes color based on social media feedback; and Melissa Coleman’s lie-detecting dress that analyzes speech patterns, among others.

You won’t find these garments in your local retailer tomorrow, but soon enough. And the implications are utterly fascinating. I’m trying to imagine a lie detector dress or suit in the business environment. Or how about a courtroom? So much for Judge Judy’s career.

And what happens when students take on wearable fashion? Will lie detector clothing become the ideal barrier to cheating? Or a room of boredom revealing t-shirts a teacher’s worst nightmare?

We are in the Halcyon days of wearable technology. The fun is just beginning.

Augmented Reality for your Ears –