In a CBS interview, Isy Goldwasser, the CEO of Thync, argues that a new wearable energy boost device can calm you down. Or perk you up. Thync takes the approach that we overuse chemical stimulants and would be better served by digital versions. It’s a fascinating development, but perhaps a little scary with the lack of research in the area. 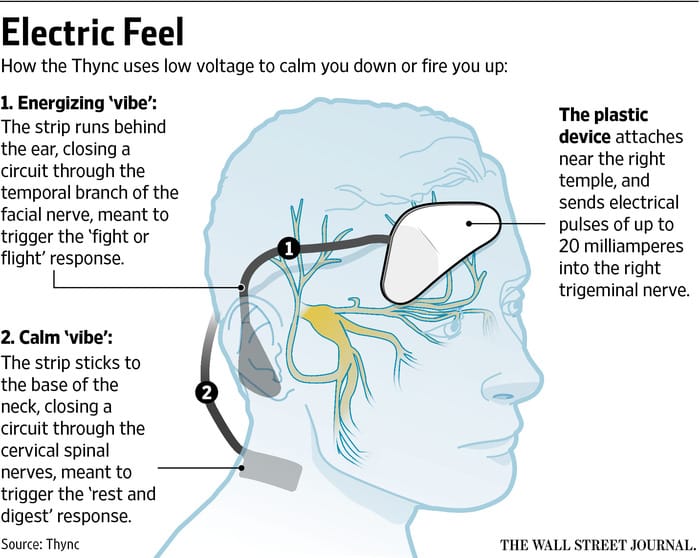 Thync works by sending low-level electrical impulses through your head. It’s the science of transdermal electrical neuromodulation which hasn’t seen a lot of medical studies yet. If you google the topic, you get about 250,000 hits (nothing for a google search). The field is in its infancy but we know the brain relies on electrical impulses and there’s some interesting work on using electric current for pain relief.

You attach one part of Thync near your forehead and a strip runs over your ear to either the back of your head or your neck. It all depends on whether you are looking for an energy boost or a calming effect. Some sticky disposable strips help everything stay in place for 10-20 minute session.

By limiting its features, Thync has managed to stay exempt from the Food and Drug Administration regulations on medical devices.

The tagline on Thync’s on website is: “Wear Thync for minutes, feel the effect for hours.”

The reviews this year are all over the place. Some people seem to think there’s no effect beyond a tingling sensation on their forehead. One likened it to the feel of ants biting you. But there’s a consider number that suggest it’s helpful, though perhaps not for the hours that Thync claims.

Geoffrey Fowler had an even-handed summation in the Wall Street Journal earlier this summer:

After more than a dozen Thync sessions, I’d consider keeping one around to use when I need a chill pill or some encouragement to go to the gym. It’s not a perfect replacement for coffee or wine—more delicious, not to mention social, ways to shift my state of mind. But Thync is a drug-free alternative. It’s just less well understood.

The CBS interview seems to reach the same conclusion. Thync does something, but it isn’t the perfect replacement for coffee. Or a glass of wine. Yet.

Students might be most amenable to a wearable like Thync. Stimulant use is high enough on college campuses and some of the current drugs of choice are probably far more damaging than whatever a low electric impulse device can do. But we should surely be thinking about the new extremes in digital abuse that we’re going to see – and I don’t mean addiction to texting (if there is such a thing) or cyberbullying.

Thync, Muse and other devices are targeting a whole new area in wearables – stimulating or regulating brain activity. This is not just data gathering through the Quantified Self, but the possibility of immediate changes in behavior through digital stimulation. Once that door is cracked, you can expect a flood of wearables promising everything from a better sleep to enhanced academic performance.

Wire me up for that sociology final. 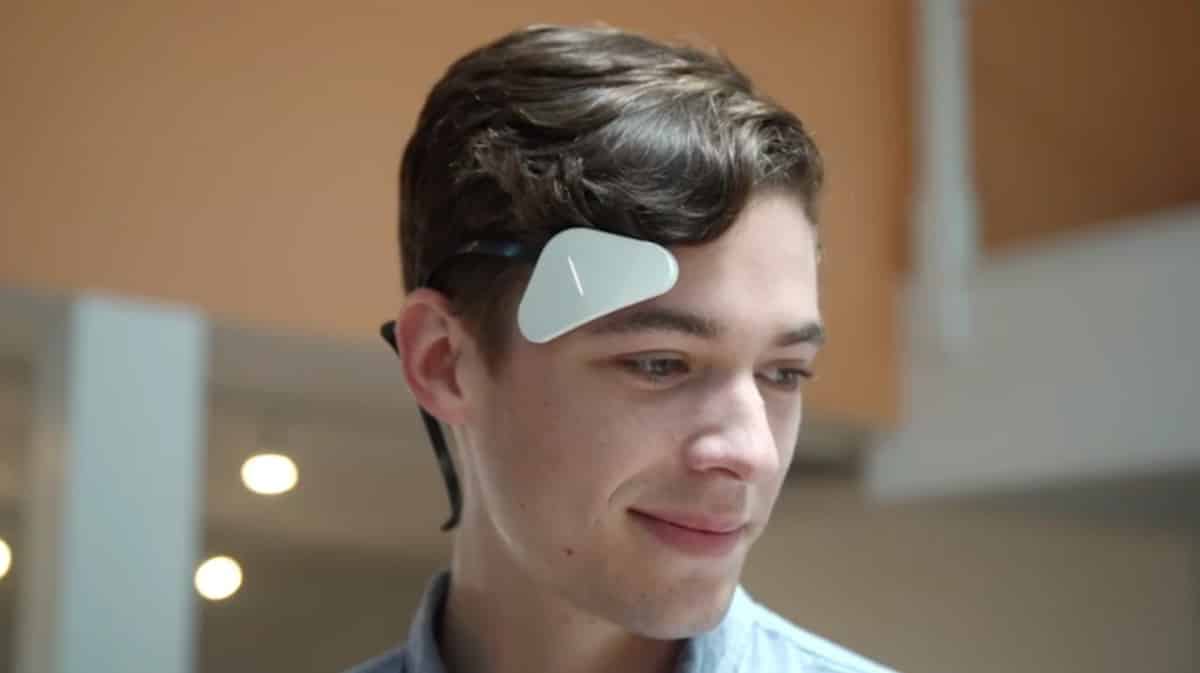 One real issue with Thync is the design. Generally, our wearables don’t require sticky pads to keep them in place. Something that takes time to set up with each use often ends up not being used at all.

While it’s a fairly elegant design given where it’s placed, it still has echoes of Google Glass. It’s hard to avoid that Borg-like quality that comes with technology attached to your head. We’ll get around this at some point (eyeglasses are just a passive form of wearable tech), but it takes time. See someone wearing Thync and you’re bound to see images from Ex Machina.

Of course, Thync is not a Wearable you wear all day, but that afternoon pick-me-up in the office means your coworkers will see you energizing yourself. Or trying to calm down after the latest budget meeting. It has a long way to go before it’s equal to the socially acceptable cup of coffee on your desk or conference table. Or the glass of wine at the bar.

That’s not to say this is doomed to the fate of Google Glass. it may well come into its own, especially once we become more acclimated to wearables in general. But at the moment, it seems more of a home-office device.

I’ve seen a lot of wearables on the NYC subways, but Thync has yet to make an appearance on my commute.

Do you want to zap yourself?

So are you willing to send electrical current through your head? Your call. We’ll have to see if a new Wearable energy boost is accepted or not. Thync may get the evidence it needs down the road, or as with coffee, the debate over the dangers and benefits may drag on for decades. Here’s a good review of 36 benefits and negative side effects of coffee, which nicely illustrates the complexity of the world’s most popular stimulant.

Coffee was a focal point of controversial as it gained in popularity in the early part of the last century. The cereal tycoon C.W. Post was behind a massive bogus marketing campaign to warn the public of the dangers of coffee, especially for children.

It robs children of their rosy cheeks and sparkling eyes. It lowers their vitality, lessens their resistance to disease, and hampers proper development and growth.

But it did create some real gems in the history of early advertising. It will be fascinating to see people’s reaction to the concerns around Thync and similar devices as wearable technology gains in popularity. 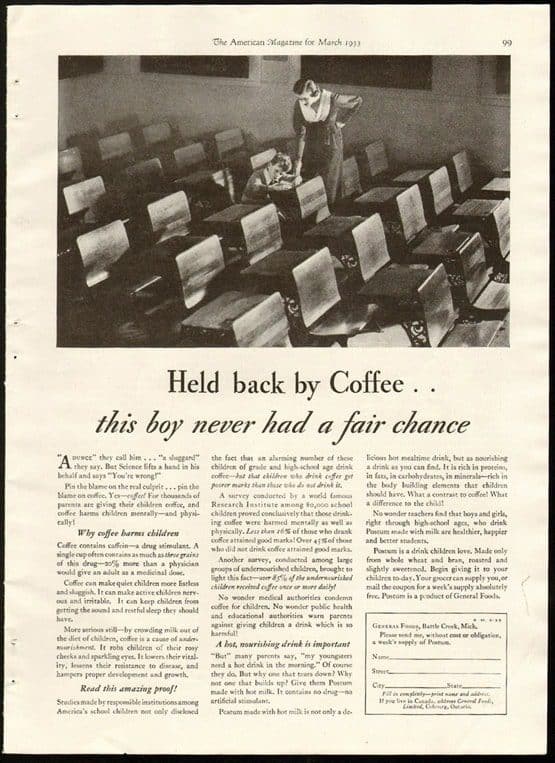