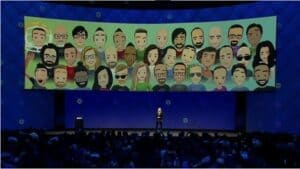 F8, the Facebook Developer conference, takes place for two days each April. This year, AR, VR and AI were at the center of the announcements and talks. In a single line, Facebook emphasized that its mission is to develop next generation tech and connect the global community. And their future goal of global connectivity will happen through immersive technologies.

In his F8 Keynote, Mark Zuckerberg focused on the latest developments in Augmented Reality. It’s no surprise that Facebook introduced a new cross-platform camera interface this week. In fact, Zuckerberg made the case that the camera will be the first AR platform. He shared use cases to get the developers thinking about overlaying information and digital objects. While Facebook continues its work in virtual reality, it’s clear that it sees the mobile AR space as a main growth area in the next 5 years.

This is about much more than AR filters for your daily selfie. It will be a platform that will compete and possibly dominate the AR space. Eventually we’ll get to a pair of glasses and contact lenses. Until then, Facebook wants everyone to think about AR through the camera platform. It’s a space for developers to create their own filters, effects, and soon enough, games and more. This won’t all happen at once. Zuckerberg was explicit that some features will be rolled out over time.

Even if F8 focused on AR, VR and AI, Facebook proved once again that virtual reality is central to their plans. They are investing in tech, software content and low cost solutions like the popular Samsung Gear VR headset. As they proved with last year’s conference, Facebook is serious about approaching VR as a social platform. This year they announced the release of Facebook Spaces in Beta available on the Oculus store. In Spaces, users will be able to create an avatar from a Facebook image that they can use in this social environment. 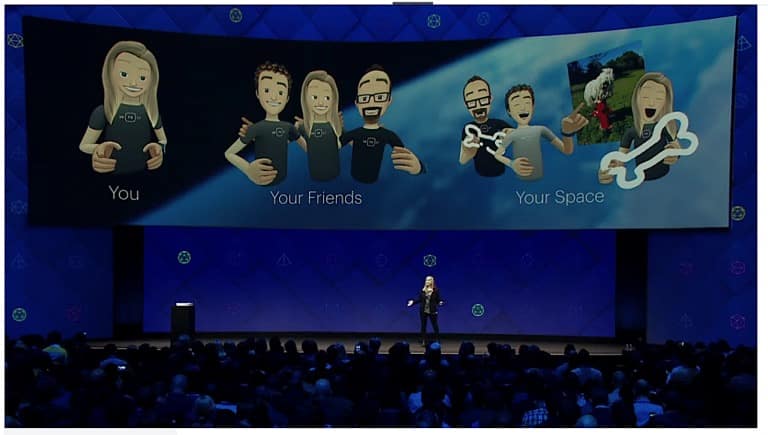 Over several sessions members of the Facebook VR team introduced the Facebook Spaces interface as mostly a work in progress. But the features are fascinating. In Spaces you will be able to share a 360 space, use your voice, and have your avatar interact with up to 3 other avatars. Avatars can project emotions as well as take the obligatory selfies. AltSpaceVR has been at the forefront of the social VR revolution up to now, but Spaces could be a game-changer.

While this is a fascinating development, Facebook Spaces social VR is currently available only for Oculus Rift users. Facebook made it possible for people without Oculus Rift to join in via a Messenger call – though that seems like a deeply unsatisfying alternative. That gives AltSpace a little breathing room – but only a little. We wouldn’t be surprised to see a modified version of Spaces show up on Gear VR and Google Daydream later this year.

Facebook learned long ago that being device agnostic is the key to connectivity (and their business).

Facebook gave away free Giroptic iO 360 cameras to all F8 attendees working with both iOS and Android. But the more important development focused on their Surround 360 camera, which was announced last year as an open platform reference design. This year, two new cameras were introduced, the x24 and the x6, which are designed to shoot in six degrees of freedom in VR and a higher resolution to provide a deeper sense of immersion. Facebook will not manufacture the cameras but work with a “select group of commercial partners”.  Clearly, Facebook is working on every aspect of VR.

In case you haven’t noticed, AI is already present in a variety of ways in our daily lives. Its potential to enhance AR or VR starts with improving computer vision. To build intelligent systems you need computers to be able to see and understand the world and continue to learn. Today AI powers bots and Facebook is planning on integrating them into AR and VR.

VP David Marcus announced that there are currently 100,000 Bots on the Messenger platform. Bots with artificial intelligence that bring speech-to-text, natural language processing, machine learning to evaluate user input and a formulate response. As Marcus noted:

Now we’ve doubled messages between business and people to two billion messages a month, and more than 100,000 bots on the platform. That’s up from 33,000 last September. That’s crazy.

For now, the bots remain far away from answering many of our questions. Facebook opened Smart replies for businesses that can automate responses on Messenger. The next phase is to empower Messenger with AI to do a variety of recommendations from food ordering to driving new social and interactive experiences.

Facebook’s efforts on connectedness focus on tech that is cheaper and easy to deploy anywhere in the world. The Facebook solar-powered Aquila drone project aims at enabling Internet access in remote areas. Further afield, Facebook is looking for wireless access solutions through the atmosphere and the stratosphere.

One of the most interesting proposals is Terragraph which is designed to extend fiber wirelessly using millimeter waves. Terragraph equips lightpoles with antennas in cities to add more connectivity in already connected areas. Millimeter waves transmit ten times faster than conventional Wi-Fi signals. As Facebook described it,

You problably already have high-speed wireless. But once wireless VR headsets arrive, you may feel like your returning to the days of dial-modems. The volume of visual data and virtual social interactions that we’ll want to access will be simply massive.

Finally, as we move from smartphones to glasses the future of Facebook may literally move from today’s multiple screens to interfacing with our brains. Ten years ago Facebook was a web platform mostly for college students. Today it has aggressively moved to mobile but it’s showing its age. A younger generation often feels more at home on other platforms. But Facebook is determined to be the platform for everyone with AR, VR and AI in our eyewear and from there into our brains.

At F8 Zuckerberg and company shared ideas and technologies that will likely become part of our future. It will be fascinating to see how the tech evolves and how it will shape and transform our experiences in the next five years. Today, AR, VR, and AI are very much in their early stages. It’s an open canvas and Facebook is determined to be the universal platform of our deeply immersive future. 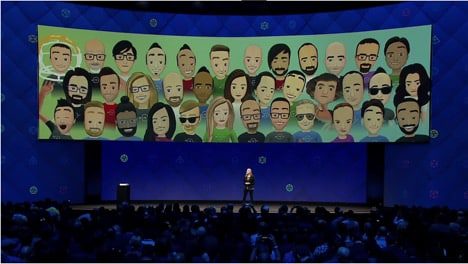