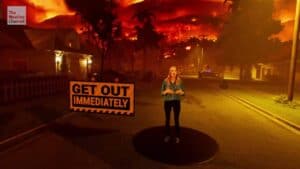 You have to love the Weather Channel’s mixed reality project. First, they did a tornado in their studio, then a rising wall of water by the ocean. And now, forest fires get the mixed reality treatment.

If this gets people to get out harm’s way during a severe weather event, all the better. It may seem a little ironic to some that we need gaming technology to help people understand the real world they live in. But print and graphics are just a different form of technology that’s served the same purpose.

Mixed reality as a lifesaver – who knew?

And I can speak from experience on this one. Growing up in Tornado Alley in the heartlands, and later on the Gulf Coast, we regularly ignored warnings until it was within minutes of being too late. Water would be rushing in our front door as we fled the Florida shoreline. Tree limbs would be flying down the street before we abandoned that small house in rural Oklahoma.

Somehow, we always got out safely. Not everyone was so lucky.

One of the Weather Channel’s most striking uses of immersive tech was back in September during Hurricane Florence. They showed exactly what it meant to face a wall of water. Numbers and graphics on a screen – the storm surge will be 2-10 feet higher – just don’t have the same impact.

The Verge describes the latest effort to convey the dangers of forest fires:

The video uses the same Immersive Mixed-Reality technology we saw in the storm surge graphic The Weather Channel launched during Hurricane Florence, where rising floodwaters rose around the meteorologist on-screen. In partnership with The Future Group, an augmented reality company, The Weather Channel uses the Unreal Engine, a video game development platform, to build these graphics in real-time . . . 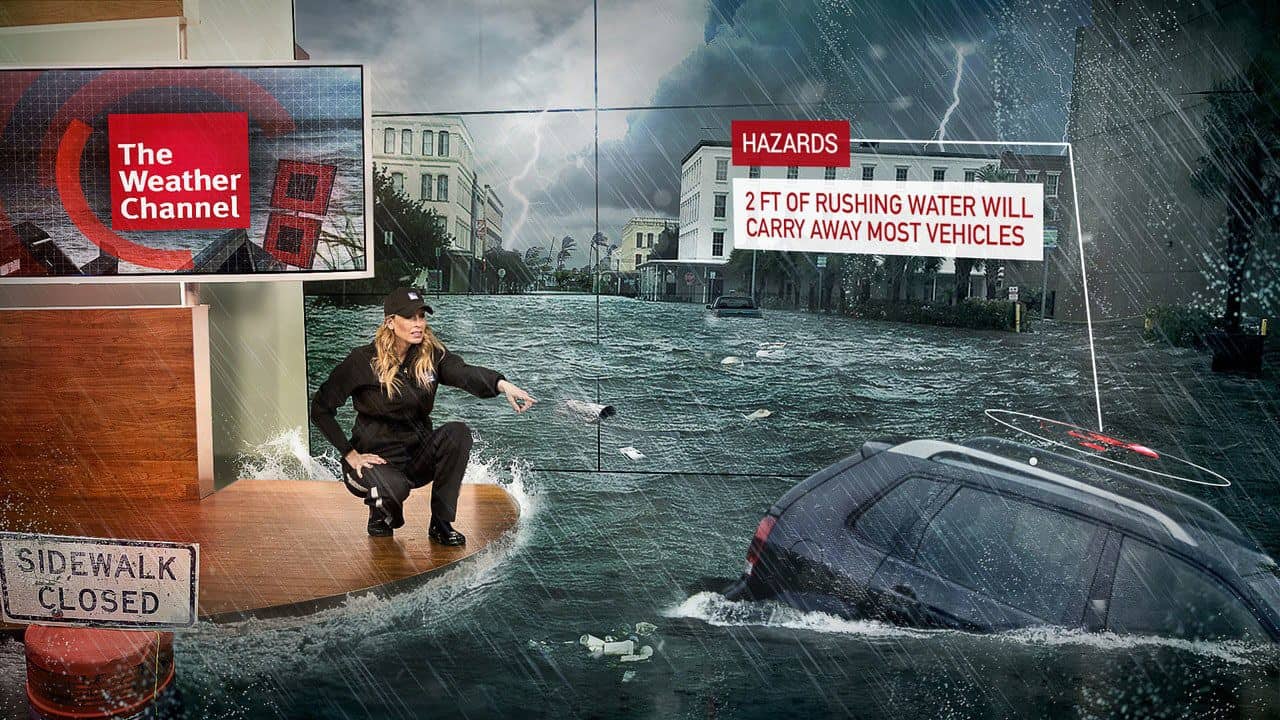 As The Verge notes,

These videos go viral because they’re existentially frightening in a way that news footage often isn’t. Instead of looking in from the outside, the meteorologist takes us inside the danger. It’s easy to passively engage with the idea of climate change or natural disasters that happen to other people, but this immersive tech is meant to shake people on the internet. It forces us to imagine what it would be like if we were caught in the flood or if flames erupted around us.

The latest foray by the Weather Channel takes up the dangers of forest fires. The project has meteorologist Stephanie Abrams standing in a peaceful forest that any of us might walk through. But then she points out how the area could quickly turn into a raging inferno. The dry brush and hot air are just waiting for a spark (almost always from a person). You can see the video here.

It’s well done but our favorite remains the one from June that had Jim Cantore dodging live power lines and flying cars as a digital tornado approached. Remarkably, the effects were done in real-time with Unreal Engine, not in post-production as is the usual practice.

Michael Potts, vice president of design at The Weather Channel, said on Poynter.org,

The takeaway is that there are ways to remain safe, to have a plan, and to see all that valuable information in a way that isn’t just four lines on a chart.

Potts sees broad applications for the technology in other newsrooms, to create environments where audiences can’t go, to show intangibles like endangered or extinct species or to create immersive infographics of hard-to-grasp topics.

With the rapid pace of developments in AR and mixed reality, the experiences will move beyond where mixed reality can take us now. It won’t be long before we can put on a Magic Leap One or future Apple AR Glasses and watch the flood waters rise around us. Or see the effects of a tornado as it rips through our home.

It’s curious that immersive tech gets criticized as isolating us from each other and the world. The impact could ultimately be the opposite. And for those that are fortunate not to be at the scene of a disaster, it could help in understanding what the victims have gone through. Ultimately, gaming technology will do a lot more than simply provide entertainment.

The Weather Channel’s mixed reality project might just get you out of your house someday. It’s the digital helping you understand the real in ways that were impossible with other technology.

Or as Michael Potts put it,

‘You can do these new things that used to be impossible. You can think beyond where you could think before.