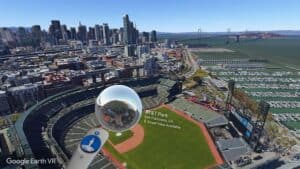 We consider Google Earth VR one of the must-have virtual reality apps. From its introduction in 2016, Google Earth VR has offered new ways to experience the urban and natural environments of this world we call home. Indeed, this is the way to explore the world from totally new perspectives.

There’s just something immensely enjoyable about moving around the globe like a giant entity, exploring cityscapes, monuments, and mountains from different vantage points. We’ll never get to experience the view from the Space Station but Google Earth VR is a pretty decent substitute.

And it just got a whole lot better with the lasted improvements.

The addition of Google Street View transforms Google Earth into an entirely new experience. From The Verge:

Google Earth VR lets you fly from an overview of the entire Earth right down to a block-scale view, letting you see actual geometry of buildings and more (in places where available), but when you zoom all the way down to human-scale, that geometry isn’t particularly precise. Now with the latest update to Google Earth VR you can flip to Street View imagery, which lets you see actual street-level photos captured by Google’s fleet of Street View cameras in 85 countries. In addition to Google-captured imagery, you’ll also be able to see 360 geo-tagged photos captured by users (same as you can see on Google Maps).

Adding 360° geo-tagged photos incorporates yet another layer of immersion to an already immersive experience. And it will become more useful in planning your trips before you book those nonrefundable reservations.

Scroll back a few years and it’s hard to imagine people staring at their phones for a street map. A few years from now, we’ll wonder how we ever lived without our VR introductions to the places we’ll visit.

The addition of Street View will increase the value of Google Earth in urban planning, cultural studies, and other areas. Street View’s library of data is already massive, and Google is providing access to previous Street View images. You can “turn the clock back” to see a street as it looked in 2007. Ten years is interesting, though not a huge deal. Give it a few more decades and cultural historians (and others) will have an invaluable database.

Google’s solution to how you move from Earth to Street View copies Facebook’s work in Social VR. Facebook has demonstrated how two people as avatars in a virtual space can share a 360° environment by pushing a photosphere up to their face.

Google Earth VR adopts the same approach. As you descend to street level, a photosphere appears near your hand-controller if Street View is available. Bring the photosphere up to your head and you’re in Street View.

It isn’t social VR – at least not yet. Nor is it as perfectly seamless a transition as we’d like it to be. But it may be the beginning of common “language” that we’d like to see across our immersive experiences.

Unfortunately, the one downside to Street View in Google Earth VR is that the latter is only available for Oculus Rift or HTC Vive. You can use Street View in Google Cardboard, Gear VR and Daydream, but it’s not the same. We’d love to see it in the new Microsoft VR headsets but word is that Steam support will not be ready for their release this fall.