Vuzix AR Smart Glasses have finally arrived. Will they be the successor to Google Glass? A breakthrough in the AR market? Can they have a real impact on our relationship with technology and our environment?

These new AR Glasses raise a host of questions. As you may know, Vuzix is no newcomer to augmented reality. They’ve already made inroads into enterprise environments and medical care. With the new released Blade Smart Glasses, they’re turning their focus to the consumer market.

And they better move fast. It won’t be long before Apple launches its own AR Glasses.

We praised the early version of the Blade 3000 back in 2017 for its innovative and stylish appearance. But we – and others – were wrong in predicting that they’d be released mid-2018. And many of us expected the price to drop to $500. Wrong again.

So it’s late and overpriced (not a surprise with cutting-edge tech). The real issue is whether consumers will be as enthralled as the Vuzix promo video promises.

Looks fun as long as you don’t think about the thousand dollar hole in your pocket. Convenient? Absolutely. Worth the money? That’s a little harder to imagine.

But let’s back up a bit as Vuzix has a fascinating device.

From a design standpoint, Vuzix has done exactly what is needed to bring AR to mainstream acceptance. The device overcomes the Borg style of Google Glass. Looking vaguely like a pair of Oakley with their thick frames, you could comfortably wear them out on the street.

There’s a bit of a glow in the lenses when they’re on. So it’s not possible to completely conceal the fact that you’re using an AR wearable. But they’re discrete enough that you won’t end up seeing a replay of the Google Glass banned signs.

The Verge describes the tech behind them,

The glasses essentially float a miniature display in the right lens of a pair of bulky sunglasses using what’s known as waveguide technology, which is effectively the same type of display projection technique that’s used in the Magic Leap One headset. Companies tend to dress up the name; Magic Leap calls its waveguide package a “photonics” chip, while Vuzix refers to its own as the “Cobra Display Engine.”

But its proximity to the technology in the Magic Leap One doesn’t mean you get the same experience. Vuzix isn’t going to give you mixed reality objects that interact with the world around you. Instead, you’re getting a basic augmented reality display that overlays digital data on the real world.

Regarding the features, Vuzix says,

. . . you can see overlaid information, indoors or out, such as patient data, mapping directions, restaurant menus, weather information, alerts and more without picking up a second screen. Truly revolutionary, Vuzix Blade AR smart glasses are a perfect companion to a smartphone, allowing users to interact with their phone hands-free. Finally fashion meets technology in the wearable display arena.

Okay, truly revolutionary up to a point. For example, you could have directions through your glasses when using Google Maps. And you’ll be able to interact with places in the real world – booking a reservation in a restaurant you see across the street. But none of this is a game-changer given what your phone can do.

Piggybacking on your Smartphone

The Vuzix AR Smart Glasses comes with a built-in 8-megapixel camera. That will make showrooming drop-dead simple (pause for a moment while that sinks in for those in brick and mortar retail). But other than that and a couple of basic games, the glasses live off your Smartphone. 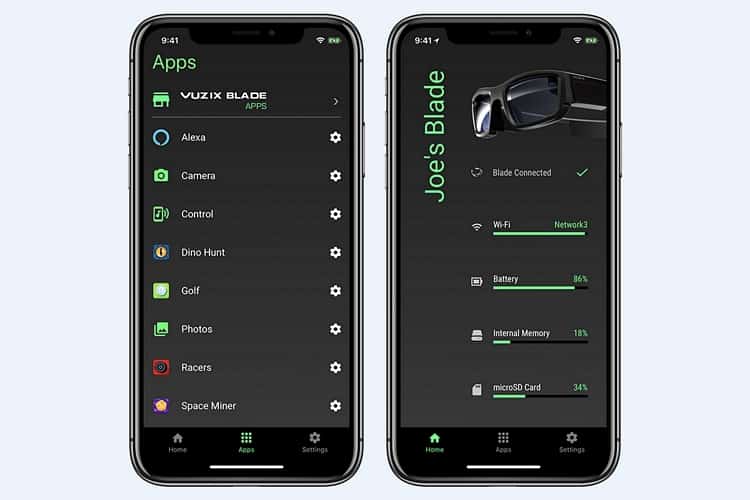 Partnering an AR device with a Smartphone solves a couple of significant challenges – size, weight, and battery life – faced by wearables. Magic Leap may have bet $2.3 Billion that people will wear computers on their faces. And someday, we will. But they’ll have to be a lot smaller and do a lot more than any AR Glasses do now.

The Verge points out a few additional features Vuzix is incorporating. The glasses will include,

. . . support for Google Assistant in addition to Amazon’s Alexa. It’s also working with some streaming video providers that it cannot disclose at the moment to bring on-demand video to the glasses, though long-term TV or movie viewing sessions on the device aren’t likely going to be how one uses the Blade primarily.

But again, voice assistants are already available on our phones. It’s a lot to pay for convenience.

Close but not enough

Vuzix has partnered with a number of companies to develop a range of specialized applications in warehouse logistics and telemedicine. But these areas are using their M-Series Smart Glasses, which were released back in 2017. And even then, the M300 devices require the purchase of an extra platform, Vuzix Basics, to implement real-time video/audio collaboration.

Vuzix CEO Paul Travers told Engadget. “It’s the beginnings of a brand new category of product.” It definitely is and the design of the Vuzix AR Smart Glasses will help augmented reality take off. But as good as they are, we just don’t see the use-case that will give them traction in the consumer market.