Augmented World Expo takes the stage again this year, marking its tenth anniversary. A lot has happened since AWE’s formative years when it was a much smaller conference. It now hosts over 7,000 attendees, 250 exhibitors, and 300 speakers. One presentation this year goes so far as to call 2019 augmented reality’s iPhone moment. As much as we’d love to agree, we’re not entirely convinced this is the year.

But we’re getting close.

A lot still needs to happen – especially in terms of comfortable AR Glasses. But there’s a sense that we’re turning the corner. AR is no longer a novelty item. Technical challenges are getting solved, enterprise has taken notice, and developments are happening at a furious pace. This year, we’re seeing the arrival of large-scale AR art projects that will introduce the broader public to augmented reality.

We’ll have much to report from Santa Clara in the next few days as the conference gets underway. There will be some exciting announcements in terms of new devices and platforms. 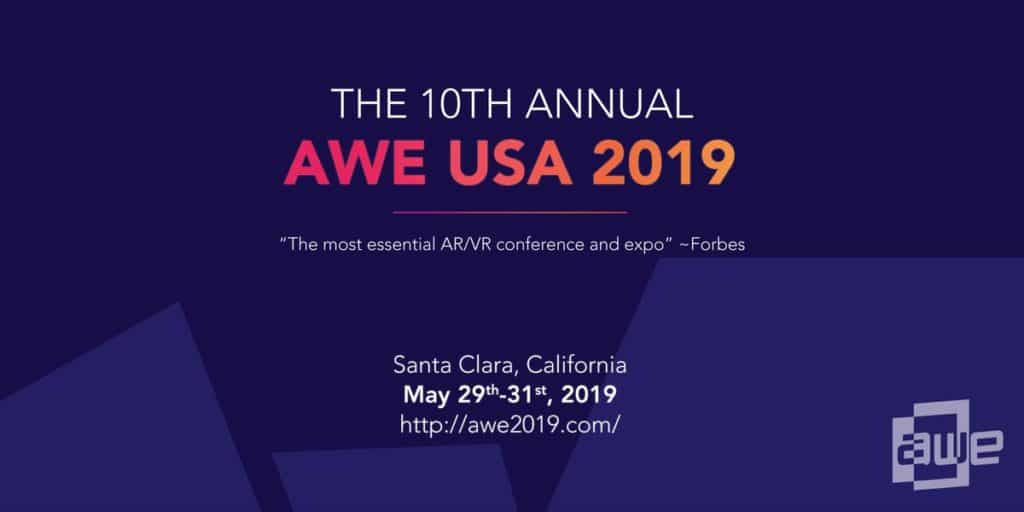 ReadWrite spoke to AWE cofounder Ori Inbar and chair Tom Emrich and identified ten themes that will be the focus of this year’s Augmented World Expo. Here’s the list followed by a few observations of our own:

Thanks to advancements in enabling areas of tech like computer vision, spatial audio gesture recognition and eye tracking, AR/VR experiences are becoming more natural and immersive.

A number of authoring tools aimed at equipping the next generation of creators with fast and easy tools for building AR/VR experiences without code are setting the stage for 2019 to be the Year of the Creator.

AR proved itself last year by increasing sales for early adopters like Houzz; 2019 is shaping up to be another good year for mobile AR ads as well as VR marketing and consumer research campaigns.

4. Gaming, eSports, and Location Based Entertainment

You need to experience a new reality to believe it, which is why immersive gaming, eSports and LBE signal the best way forward for AR/VR at a time when the average consumer cannot afford good immersive experiences.

AR/VR are raising critical issues around access, privacy, consent and harassment. At the same time, we have the opportunity to make a conscious effort in including people of all gender identities, sexual orientations, ethnicities and socioeconomic backgrounds in the future of computing.

AR/VR are now well-established tools providing ROI at a number of Fortune 500 companies, with larger and even full-production rollouts of AR/VR solutions expected to ramp up in the next few years.

AR/VR are helping to design, assemble, service and shop for the cars of tomorrow, and may very well serve as the primary form of in-vehicle entertainment when we no longer need to pay attention to the road.

The race to build an index of the real world is on, with companies working to align digital content with the physical environment on a global scale in order to enable next-level augmented reality.

Web-based AR/VR content will impact immersive tech adoption and overall use by exposing the masses to augmented and virtual reality without requiring an app download.

The next-generation of AR/VR applications are going to require greater bandwidth and lower latency than 4G can deliver; hence why the future of immersive tech depends upon the rollout of 5G.

A couple of comments on 3, 5, 8, and 10 at Augmented World Expo. Advertising is finally leveraging AR with incredibly creative results. Take a look at the Burger King “Burn That Ad” campaign in Brazil. If you think being noticed in the market is tough now, wait until we have ubiquitous augmented reality.

We’ll be looking carefully at the ways privacy and ethical issues are addressed. While companies are beginning the raise the topic, we’re not convinced the commitment is there. It’s somewhat like the AI review boards. Companies like to boast they have them, but they’re essentially toothless.

Everyone wants to build an AR Cloud, and not just to capture data. It’s more about aligning the virtual world to the real world. And whoever gets there first will have a significant advantage. It almost feels like a replay of 15th-century cartography – figure out a way to map the world, and it’s yours. We shouldn’t have to remind you that the 15th-century version ended with some horrifying results.

Finally, for all the talk about 5G, everyone needs to temper their expectations. Yes, we need it for AR, but the rollout will be painfully slow. And with the need for new hardware and infrastructure, expect only a small percentage of the population to benefit at first.

Where will AWE be at Twenty?

For a quick exercise in futuring, try to imagine the Augmented Reality Expo at its 20th anniversary. Yes, there will be AR Glasses everywhere. And probably something far beyond 5G. And we’ll be deeply interconnected in a world that blurs the lines between the real and the virtual.

But it’s the decisions we make in the next few years will be critical. How we address the ethical challenges of AR today will determine the quality of that world ten years out. So the crowds will gather, demo the new technology, and hear breathless details about how it will transform our lives. And it will. But there will be unintended consequences.

That’s what makes VR and AR so fascinating – the future is in our hands.

Boston the Site of the Largest AR Art Ex