The new Bose AR Glasses are a fascinating development in the augmented reality space. Bose demoed a prototype earlier this year out on the streets of Austin during SXSW to generally good reviews. There was no guarantee then that they would morph into a product.

But indeed, they did and you can now pre-order a pair for $200 with delivery in January 2019 on the Bose site. What you’ll get is not exactly AR Glasses but an audio augmented reality wearable.

The bigger question is can they actually catch on? And are they here for the long haul or only until the Apple juggernaut arrives with its own AR Glasses? The answer might be more complicated than first appears. 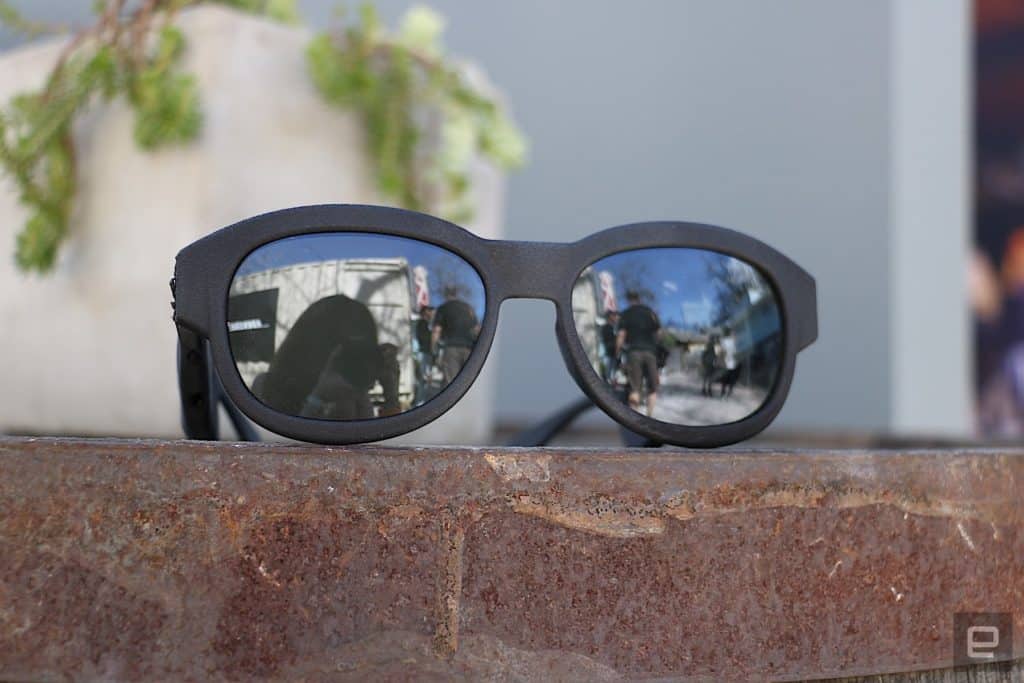 Where Frames work differently to other eyewear with hardware built into them, like Oakley’s Radar Pace, Epiphany Eyewear and certainly Google Glass, is the focus placed entirely on using sound to deliver an AR experience. There are no lenses onboard to capture photos or videos and no tiny screens to display information.

As the company’s first commercial product to integrate its AR SDK, the glasses will use GPS and a 9-axis motion sensor to recognize where the wearer is and what they are looking at, and then connecting that location with informative audio. The software is still under development, but imagine turning up to the Coliseum and having your sunglasses give you a brief lesson in Roman history.

Undoubtedly, there are possibilities here. What you’re getting is an amalgam of data from Google, Siri, and other sources. Exactly what remains unclear as the Bose AR app has yet to be released.

For the most part, Bose is positioning the glasses as a consumer item, not as an AR wearable for the education or enterprise sectors. But throw in a couple of distance sensors and way-finding software in a future version and you might have a very cool-looking accessibility device.

At SXSW, Bose AR Glasses worked well by most accounts. Here’s the conclusion of The Verge after trying them earlier this year in Austin.

When paired to our phone, the glasses were able to understand our location using GPS and our direction using its own built-in nine-axis motion sensor. Using these data points in conjunction with voice commands and a single multifunction button, the glasses could then offer information about whatever we were looking at via the speakers in each of the sunglasses’ arms. It wasn’t as accurate as AR glasses that overlay a digital display onto the real world, but the audio approach was surprisingly effective.

And as for ease of use, the glasses rank up there with your computer mouse. Turn to look at something and double tap the frame. It’s point and click using your head. Technically advanced speakers mean that you don’t have to worry about headphones or earbuds. These are baseline features that all AR Glasses need to incorporate in the future.

A future for audio AR?

We’re restating the obvious when we say there’s little movement with AR Glasses right now. Everyone has a project under development (even Google), but no one is close to release. So when glasses arrive – all in the same year, we’re sure – will Bose AR Glasses seem like a stop-gap solution?

Will they go the way of Snap’s Spectacles, which seem to be floundering even without the competition? Digital stickers will only get you so far, will audio get you further?

Honestly, it’s hard to say. It’s clear the market will jump on visual augmented reality, particularly if Apple does it right. But that doesn’t necessarily mean the end of audio AR.

Bose’s AR glasses are mainly a pair of sunglasses – ones that block 99 percent of UVA/UVB rays and weigh only 45 g (1.6 oz). That’s just a little more than a pair of standard sunglasses. And they only cost $200 – less than some current high-end eyewear. Even better, you can try them out for 30 days and return them for a full refund. Every Immersive tech device should come with that option.

There might be a place for an audio AR wearable when people don’t want to bring their expensive AR Glasses with them. The beach, driving, sporting events, travel in challenging locations, etc. Much will depend on what augmented reality delivers in the future. Will it needlessly clutter our experience or truly augment it? And how easy will be to customize our experience – even on the fly as we wear them?

Bose has lept ahead by embedding AR in an object already widely in use, and for little more than the cost of the object itself. It’s a goal that every augmented reality project needs to aim for.