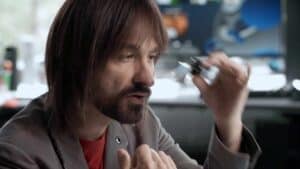 If you were hoping to see a pair of Microsoft AR glasses for consumers in the near future, it’s been a good news/bad news kind of day. Alex Kipman confirmed that Microsoft is working on them, but he cautioned that there wouldn’t be a consumer AR device anytime soon. The challenges are the same ones we’ve noted all along – the weight (due to power requirements) and processor issues. We haven’t reached the moment where we can pack everything in a lightweight pair of AR glasses that people will wear all day (or most of the day). The few available designs – such as Nreal AR glasses – are comfortable but limited in what they can do.

So the AR revolution is coming, but we’re like passengers in a station waiting for the train. The more we wish to see it arrive, the longer it seems to take.

Alex Kipman’s comments came in an interview with Joanna Stern during The Wall Street Journal’s The Future of Everything Festival. First, Kipman said there would be further versions of Microsoft’s enterprise-oriented HoloLens. HoloLens 3 will represent a “leap” in both technology and comfort. As good as the device is, at $3,500, that’s little comfort to those of us looking to get it into educational institutions or workforce development settings. It’s important to get a few (if you can afford them) to experiment with the technology, but not something your students or employees will have as a personal device.

Where it gets interesting was Kipman’s confirmation that Microsoft is working on AR glasses. The good news is that they’re coming, the bad news is that it will be a while before we see them. Kipman said:

Clearly, Microsoft will not produce a pair of lightweight AR glasses that only serve to provide notifications like you already have on your phone. Mark Zuckerberg has said the same thing for Facebook’s AR project. It doesn’t make any sense to put an Apple Watch on your face. Real AR – and Mixed Reality – is about immersive experiences, and the tech is there. But getting the cost and size down to a consumer version is still some years off.

Let me just contextualize that: The HoloLens 2 weighs about 500 grams and it consumes about 8 watts of power. Power is to heat is to comfort . . . For you to get to [AR smartglasses] comfortably, 500 grams needs to become below 90 grams, and 8 watts need to become lower than 2 watts. So I need to increase the immersive, things that cost power and weight, but I need to be able to decrease the weight by over 5X, and decrease the power by over 4X.

In the end, using wearable devices boils down to comfort. Kipman continues,

When you put a HoloLens 2 on, where do we distribute the weight? On bone. On [your] cranium. We don’t make the device, by design, to touch your nose or your ears…If I’m going to get to [AR smartglasses] I’m going to have to put weight on cartilage, and the human factors to do that comfortably aren’t clear.

It will happen, but it’s akin to early computers going from filling up a room to becoming the small device that fits on your desk (or lap). We’ll get there, but not this year. And for fully immersive experiences, not even next year. Increasingly, we are looking at 2022 as the breakout year for augmented reality.

The Possibilities of AR

Despite the lack of a consumer version of HoloLens 2, there are several fascinating projects underway in education organizations and museums. To highlight just one at St. Peters Church in Belgium, the M Leuven museum outside of Brussels has launched “Between Heaven and Earth – Experience The Last Supper of Bouts.” Visitors are able to step into the works of Flemish Masters, including Dieric Bouts’ “Last Supper.” It’s the kind of experience we’ll simply take for granted once consumer AR glasses are ubiquitous. The video is in Dutch, but you can change the settings to auto-translate.

A decade from now, we’ll wonder how people ever experienced art without AR glasses. Or educated a nurse, doctor, scientist, sociologist, or artist without them.

Kipman didn’t provide a timeline and Microsoft’s AR glasses could be years away. But with Facebook looking to release their own AR wearable next year with Project Aria and Apple hard at work on an AR and/or mixed reality device, competition could speed up the development.

Microsoft CEO Satya Nadella confirmed in an interview in Bloomberg the company’s commitment to AR and mixed reality.  As he put it, this is no different than Microsoft’s pivot ten years ago to cloud computing. It’s a long-term commitment that will pay off in the end.

That’s what it takes . . . I don’t think about this as, ‘oh, it’s about HoloLens,’ I think of this as Microsoft should — and the industry should — continue to push on how can people communicate, collaborate and build community, whether it’s for work or for play.

Microsoft, Facebook, Google – all have projects underway to bring consumer AR glasses to the market. And it’s a development that will transform how we learn, work, and play. But a little patience is in order before we can step through the gateway to the Metaverse.

Facebook’s VR Future – An In

The Good and Bad in Snapchat’s New