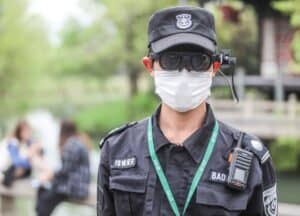 Coronavirus fighting AR Glasses are a fascinating augmented reality development. There are obvious use-cases for an AR device like this and a host of ethical implications, especially when government agencies start using immersive technologies to monitor the public. But with COVID-19 upending customary norms of human behavior, don’t jump to conclusions too quickly.

A Chinese startup that develops augmented-reality products for use in manufacturing and gaming has found a promising growth area in the midst of a global pandemic – wearable glasses that measure temperatures on the move.

In response to the COVID-19 outbreak in late 2019, Hangzhou-based startup Rokid developed a pair of glasses to help screen for symptoms. Rokid Vice President Xiang Wenjie says demand has risen for the company’s T1 glasses, developed in only two weeks, after it sold roughly 1,000 pairs to governments, industrial parks and schools. 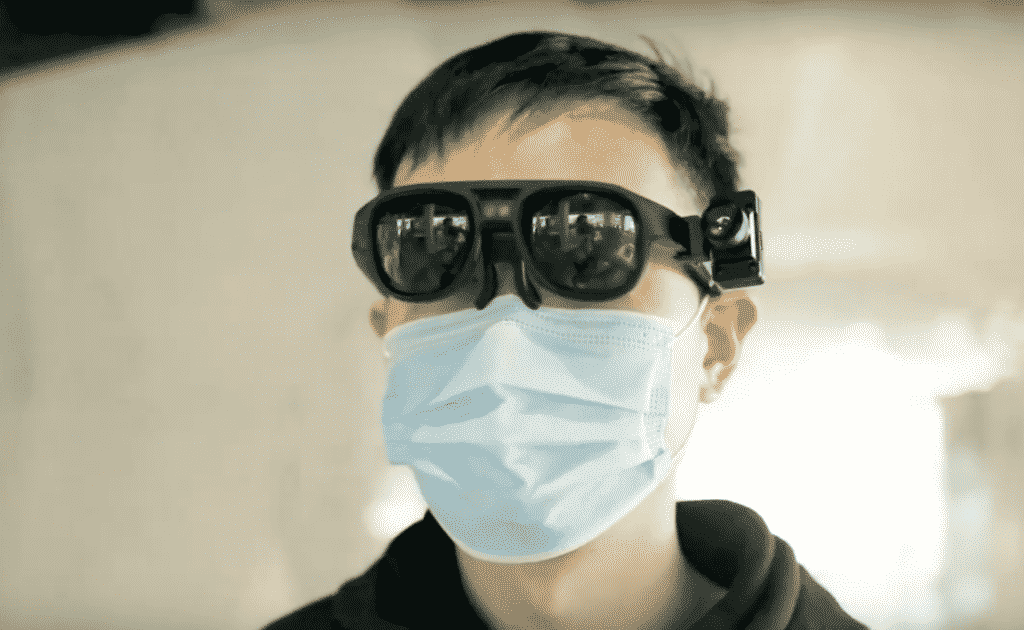 Rokid’s AR glasses with built-in thermal imaging capabilities didn’t gain much traction with their social media posts back in March, but that may be changing as COVID-19 continues to decimate the global economy and our daily lives.

It was the YouTube videos that finally put the AR glasses on the map:

Essentially, the Coronavirus fighting AR glasses are Rokid’s smart glasses with some not-too-extensive hardware and software modifications – which is why they pulled this off in a couple of weeks.

The glasses come equipped with an infrared sensor that measures nearby temperatures with the help of a camera, and communicates that information in real-time to the display. It carries a Qualcomm CPU, 12-megapixel camera, Rokid’s U.S. Director Liang Guan told TechCrunch last month, and can also deploy augmented reality features to record photos and videos hands-free.

The AR glasses can register temperatures of people up to around 3 meters (ten feet) away. While they may not record the data faster than a scanner, there are obvious advantages in not having to use a handheld device.

Early AR innovator Vuzix has also jumped into the remote temperature sensing space. They’ve partnered with Librestream and its Onsite Cube, a remote thermal camera that can be added to the Vuzix M4000 Smartglasses. And other head-mounted solutions, including the use of AR helmets for temperature-taking, are also spreading.

Police and epidemic control units in China can now screen out potential coronavirus carriers with the help of futuristic-looking smart helmets. Shenzhen-based Kuang-Chi Technology introduced police smart helmets that can quickly measure body temperature in crowds. The infrared cameras attached to the N901 helmets enable wearers to measure temperature from up to five meters away. (South China Morning Post)

The Ethical Implications of Head-mounted Sensors

AR glasses will transform business, education, and entertainment. And they’ll offer platforms for creativity that will leave our smartphones in the dust. But on the face of a helmeted, masking-wearing, police officer, AR headgear takes a different perspective. It looks sinister, like something straight out of a SciFi movie.

It’s easy to see Coronavirus fighting AR Glasses used in high-surveillance countries, and the AR glasses are already spreading in China and other high-surveillance areas. They’ve yet to appear in Europe and the United States, where there is strong opposition to anything that resembles face-scanning technologies. From our early days of using Google Glass, we watched with amusement as opposition quickly grew to Google’s innovative HMD. We were amused as people seemed to forget that it’s so easy to capture people on the streets and in bars with your smartphone camera.

But there’s a difference.

A fundamental difference when your head is involved – which is why AR will be an ethical minefield. Technology crosses a boundary when cameras and other sensor hardware is no longer in your hands but attached to the same bodily appendage where your eyes are located. As Susan Sontag put it in On Photography,

To photograph is to appropriate the thing photographed. It means putting oneself into a certain relation to the world that feels like knowledge – and therefore, like power.

And we react to it in that way. Text feels like an interpretation of the world. On the other hand,

There is an aggression implicit in every use of the camera. This is as evident in the 1840s and 1850s, photography’s glorious first two decades, as in all the succeeding decades, during which technology made possible an ever increasing spread of that mentality which looks at the world as a set of potential photographs.

That implicit aggression is exponentially greater when the camera is mounted on our heads. No longer a tool in our hands, it becomes simultaneous with the act of seeing. Add in temperature-registering body sensors and you would seem to conjure up the perfect recipe for an authoritarian society.

Could Our New Normal Upend Everything?

But step back from the precipice for a moment.

We live in a world where cultural and personal boundaries are shifting dramatically. And as Socrates (and Plato) knew well, ethics is always about practical life-altering questions. What if businesses and higher education institutions are unable to reopen without temperature checks? Do we place people at building entrances with handheld scanners? When does it become more efficient to roam an organization’s workspace with head-mounted temperature-sensing gear? Is there a breaking point, even in Western societies?

We already see a debate over the wearing of masks in public. If COVID-19 resurfaces in a second (and worse) wave, what steps are we willing to take to bring it in check?

At the very least, we wouldn’t be surprised to see Coronavirus fighting AR glasses eventually used in airports and other areas that attract large crowds. In other words, places where we’ve already accepted the use of surveillance techniques we recoil from in other locations.

Educational organizations, nonprofits, and (to a less degree) workplaces are sacrosanct – but only up to a point. They’ve all moved far beyond the once-unthinkable proposition of ceiling-mounted security cameras blanketing their interior spaces. Just last month, Amazon confirmed it is already using thermal imaging cameras in its warehouses to curtail the spread of COVID-19.

Our initial introduction to augmented reality has been one of self-expression and entertainment (eg., Snap’s Lens). We’d hate to see it become a world of surveillance first, entertainment second. But anything’s possible in our Coronavirus era. The technology is only going to become easier to develop – and easier for governments to use. The questions about augmented reality always boil down to a fundamental issue: how will we use it?

In the meantime, wear your mask and stay safe.

Oculus Quest Back in Stock – the P