The New York Times continues its exploration of virtual reality with a new VR film The Contenders. The new piece dives into the Presidential campaign and the crowds following the candidates. The project suggests that virtual reality could impact politics the way television did decades ago.

After distributing over a million Google Cardboard units to all of its print subscribers last November, the NYT is uniquely positioned to examine the political process through virtual reality. 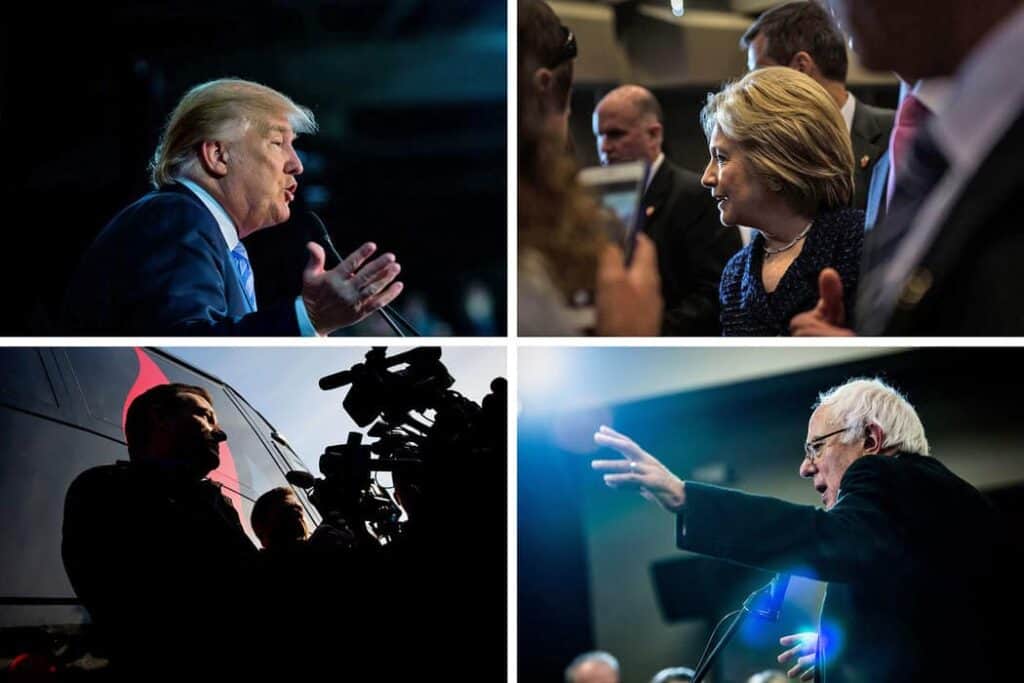 Presidential campaigns are unique events, and they make for a fascinating for a VR film experience:

Arenas, auditoriums, restaurants, banquet halls. These are the unexceptional settings of an exceptionally American endeavor: running for president. In these communal spaces, average people have the chance to share a few words with the next Bill Clinton, George W. Bush and Barack Obama. The next president just might be the man (or woman) sidling up to you in your booth at the diner or trying to shake your hand . . . .

One of the challenges in doing a VR film is the loss of control. Viewers can look anywhere they like. At the Sundance Film Festival, filmmakers are wrestling with this issue. How can we direct the viewer’s gaze? At what point is the immersive quality broken when the director steps in? Audio and lighting can highlight moments in a 360 degree environment. But viewers can always ignore them.

In The Contenders, The NY Times can put the issue aside. When you are filming crowds in VR, you can let the viewer’s gaze go wherever they want. The crowd becomes the experience:

But the best part of campaign events are the crowds, because you see, hear, and even feel what these people care about.

These kinds of experiences are ideal for the immersive aspect of virtual reality. You dive into the event, and see it as if you were actually there.

The Contenders proves that a VR film of the crowds is a much use of VR than CNN’s misguided virtual reality effort in one of the early debates.

What will politics change in VR?

With the rise of television, we saw that the image or soundbite can empower a campaign or destroy it. Will virtual reality provide the next wave of transformation?

If political rallies include VR video streams, will crowd arrangement and seating become even more important than they are now? Politicians already stage who sits beyond them at a rally. Virtual reality may make the entire crowd a staged event.

It’s a few years before we have live virtual reality streams of political events. In the meantime, VR may become a way for people to visit campaigns that they do not want to attend in person. They may feel uncomfortable due to their political beliefs so simply find that it is not worth waiting in line.

To see the VR film, you’ll need to have the NYT VR app on your mobile device. You can get it for Android or for the iPhone. It’s a fascinating glimpse into our political process. Enjoy the show.

Public Awareness of VR – We have a