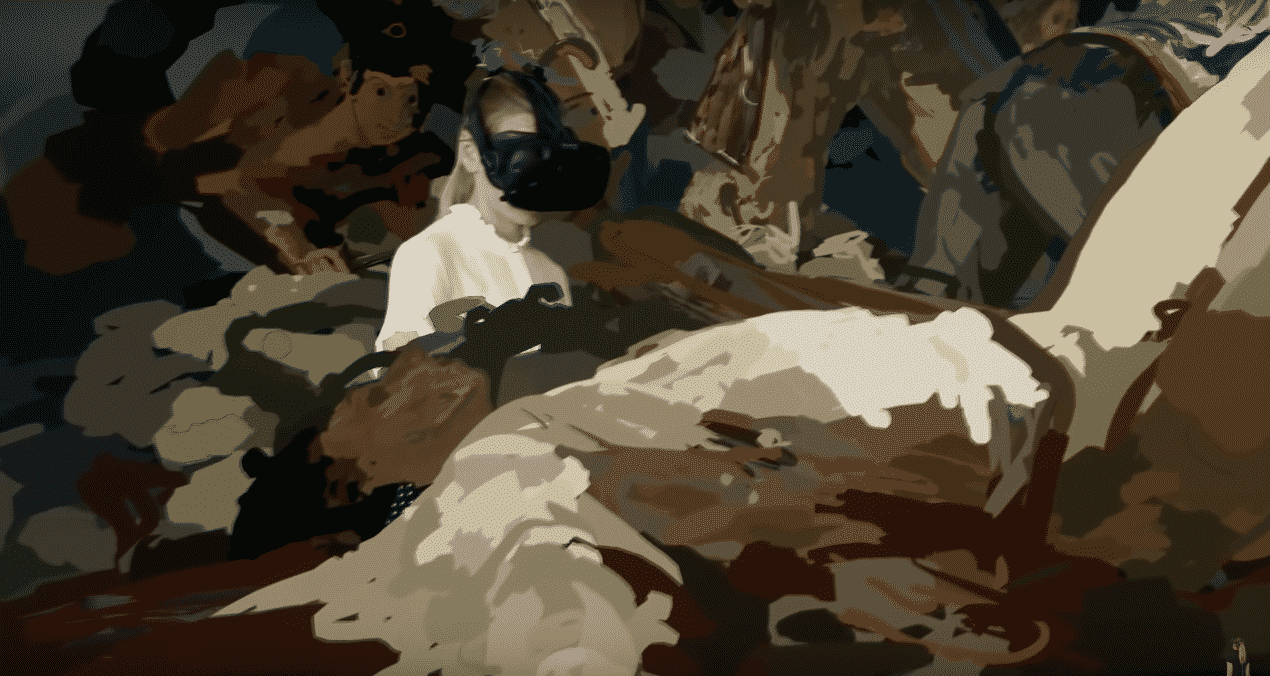 Paintings like this with a dynamic grouping of figures are just begging for treatment with Google’s creative VR tool. Instead of still figures in a frame, you step into their space, creating it for them.

And in this case, it doesn’t hurt that Delacroix’s masterpiece was seen as a call to arms – so much so that the artist kept it hidden in his attic for many years. The best VR projects we experience are just as radical in their intent.

On a personal note, it is one of my favorite paintings from that era. We could do without the gender issues, and it doesn’t evoke the French spirit as much as some suggest. But within the limits of the technology, it tries to break free of its two-dimension prison – you feel as if the characters are rushing toward you in search of something greater.

Delacroix didn’t paint a revolution; he painted the idea of freedom.

Google updated Tilt Brush back in June, and it continues to improve as an artistic medium. Along with Google Earth VR, it’s one of our favorite ways to spend our time in Virtual Reality. But as we use it, we’re always trying to imagine where it will be in 2-3 years. And how Virtual Reality artists will use it.

Right now, you get a sense that Tilt Brush is in the early stages of any creative medium – trying to find its own unique mode of expression. Will its future be the recreation of art in other forms (as here) or an entirely new form of expression?

But we’re still viewing in 2D

One thing that would help tremendously would be to resolve the distribution challenge. Google provides options, and 3D sketches can be saved and shared on Poly, Google’s 3D distribution platform. But much of the current work in Tilt Brush ends up on YouTube – and here’s the irony of it.

Incredibly creative VR work ends up being shared on a rectangular screen format that we’ve had around since 1893.

It’s fascinating to watch, but you’re missing the immersive impact. Part of it is due to the technical challenges. It’s a lot easier to get to YouTube than fumble with a VR headset. However, it’s beginning to change with easier-to-use HMD’s like the Oculus Go and the forthcoming Santa Cruz. Or so we hope.

The future is in the hands of our students

For now, this is where we are, a transitional stage. To truly see the potential of Tilt Brush, put it in the hands of your students. Even more, in the hands of younger kids and teens who are growing up in a world of AR experiences in Snap and Pokemon Go. We’ve been blown away by what we’ve seen them create in our VR workshops – even in short ten-minute sessions.

In many ways, Tilt Brush is the future. It’s just that the future is not entirely in our hands – but in the hands of those who will follow us.

What to expect with the Oculus Santa Cru