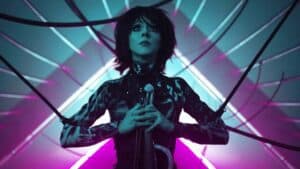 With virtual reality, artists continue to push the boundaries of art and performance in fascinating ways. Tomorrow (Monday, August 26th), you’ll have the chance to see the incredibly energetic violinist Lindsey Stirling do a live performance in VR. Coming out of America’s Got Talent, she’s done six live tours, four studio albums, a book, and more. And her YouTube stats?

She’s at 11,947,440 subscribers tonight. And that will surely jump after tomorrow’s VR event.

The old avenues for success in the music business are being swept aside by a tidal wave of new opportunities through TV, YouTube, and even street performances. Anything can catapult you to popularity if you’ve crafted your talent and digital presence. 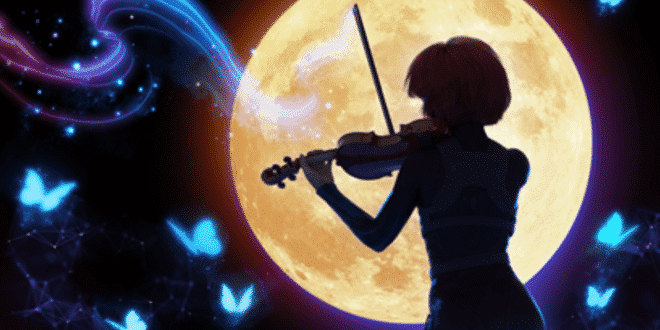 If you’re at all familiar with Lindsey’s work, you know a standard VR setup isn’t going to cut it. Her dance moves are integral to her performance. Unlike the early live VR performances by Reggie Watts and others in AltspaceVR, she’ll need a full motion capture outfit. Reggie’s performances were pushing the limits of much more primitive technology. Immersive tech is changing . . . right before our eyes.

VRScout has the details.

In a video posted to Stirling’s official Twitter account, the musician can be seen wearing what appears to be an XSens 3D motion capture suit and Manus VR Gloves. This device captures Stirling’s movements and translates them into VR in real-time, allowing her to perform complex dance routines just as she would in real-life. While Stirling will be performing the entirety of the show, she’ll be doing so as her character “Artemis,” goddess of the moon and the protagonist of her latest album.

XSens isn’t your average gamer’s mocap outfit. The company bills itself as the only solution that provides “lab-quality motion capture in field conditions.” And with Lindsey Stirling’s complex choreographed performances, she’ll need it.

If you’re interested in learning more about Xsens, there’s a three-minute interview at their booth at CES 2019.

What Lindsey Stirling will do is anybody’s guess, but you can bet she won’t stand still. On Friday, she gave us a quick glimpse of what her live performance will look like.

Sneak peak at my life as an avatar! https://t.co/Fz2G2rlCQ8 pic.twitter.com/GoksCawH4N

Early live performances in VR often put the audience on the stage. It was an obvious approach that gave us a new perspective on our favorite artists – but only for a few minutes. Just as early movies quickly moved beyond staging theater in film, we see artists beginning to capitalize on the possibilities of the virtual environment in VR. In other words, focusing on the virtual instead of the reality.

Why not step off the stage into the virtual world we all encounter in our headsets? Lindsey won’t be on a traditional stage, and neither will the audience. VR Scout continues,

Fans can enjoy the show in VR via the headset of their choice and occupy the venue as a standard avatar or floating star; attendees are encouraged to interact and engage with the experience by posting comments and questions.

These are fascinating developments that are only beginning to explore the full potential of VR. They will expand exponentially as immersive technologies converge with artificial intelligence and advanced motion capture.

What happens to art and performance when the artist exists as an avatar? As a self-directed AI avatar? As multiple avatars with different sides of the artist’s personality? How does the audience change when we no longer digitally replicate the music but other facets of the creative individual from whom it came?

It won’t be that long before Amazon or Apple Music will seem as anachronistic as cassette players do today. They can only digitally share the music, not the artist.

The future will have us interacting with the performer in our living room. Or, as in Lindsey’s case, they’ll take us into a virtual world of their own creation. Music will only be one aspect of the experience.

Lindsey Stirling’s live performance in VR gets underway Monday, August 26th, at noon Pacific Time on Wave, which you’ll find on both SteamVR and Oculus Store platforms. If you don’t have access to your VR headset, check out the performance on one of the live streams that will be available on Facebook, YouTube, and Twitch.

And watch the future unfold.