Coca-Cola’s AR Marketing has always been future-oriented. It’s latest project has animated stories emerging out of Coca-Cola cans. The augmented reality experience generates one of twelve stories that start with a conflict and ends with a resolution. It all leads to the company’s motto, of course – sharing a Coke. The Drum describes the collaboration with Ogilvy Mexico and VFX house Timber.

Santa Monica-based Timber worked with Ogilvy to create 3D elements needed for the interactive AR experience where users are able to point their phone’s camera at a can of Coke and witness one of 12 stories come to life. The stories each revolve around a minor conflict, where animated characters engage in a lighthearted exchange leading to an outcome that becomes more favorable by sharing a Coke.

One shows a couple of kids getting their beach ball deflated by a beach umbrella, while another shows a young couple at a movie getting scared and dropping their popcorn.

Another playful video shows two rival soccer fans squaring off against each other by beating the drum of their own team. Just when things get heated a ball comes flying out of the “real” can and the two become friends as they engage in a game. All activities center around the can of Coke as a way to make everything better.

From the environments to the characters and overall animation, Timber took the lead in creating a captivating world that elevated the consumer experience beyond the beverage, with opportunities to interact with products while entertaining users both young and old.

There’s a quick video with a few scenes of the development process and one of the AR experiences.

Coke has been using augmented reality in marketing for several years. One of our favorites experiences – perhaps because of its collective, social nature – was their 2018 campaign in the Mall of Scandinavia. According to Augmania,

Coca-Cola’s recent AR campaign at the Mall of Scandinavia was by far its major 2018 hit. It brought life to the coca-cola cans and bottles that were all over the place in an attempt to persuade people to interact with it by collecting it and disposing of it. The campaign was very engaging and people had a lot of fun tossing the cans in creative gestures into the garbage collector. After all, the campaign ‘s goal aimed at highlighting the importance of recycling and keeping the environment clean. Amazingly, people were more than willing to join the cause and be part of the disruptive experience.

As you can see from the video, it was almost impossible to resist.

This year’s project with animated stories from Coke cans is equally fun – just not as social since the current state of our AR technology has us largely peering through our own smartphones. Social AR will be game-changer – once we get there.

Of course, being New Yorkers, we also love it when AR marketing gets edgy and goes after the competition. The best example of that so far is the Burger King AR campaign in Brazil that had customers taking a competitor’s ads and “lighting them on fire” to score an inexpensive Whopper. The “Burn That Ad” project from Burger King doesn’t come with the feel-good qualities of Coca-Cola’s AR marketing experiments. But it’s outrageously creative and funny – unless you were the hamburger chain’s competitor. Then it hurt. Especially since you were in effect paying for their AR triggers with your own ads.

It shows the phenomenal range of marketing creativity companies will have once AR Glasses are ubiquitous.

And some of the paradoxical challenges we’ll face.

AR Marketing Dilemmas in the Future 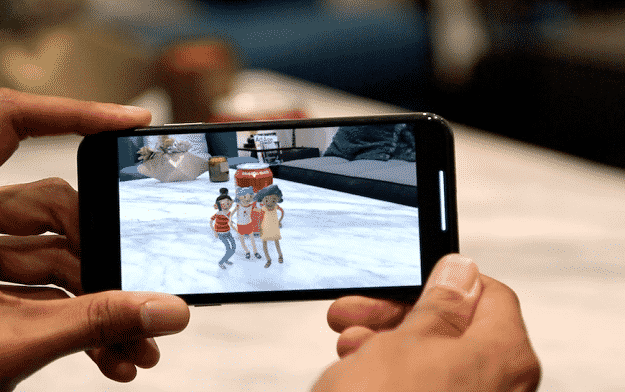 As we rush headlong into our AR future, we’ll discover fascinating opportunities for AR marketing. Our environment will become a story space where any object or its packaging can be a source of entertainment and wonder. Advertising has always been about storytelling. But now we are at the threshold of a new era where advertising will move from signs, logos, and digital screens into every aspect of our environment. The tabletop is no longer an area to place a can of Coke, it becomes a space to encounter the product’s story. itself.

That also means that the corporate sector could monopolize nearly every aspect of human life. Any object or activity could become a trigger for an AR experience. Do we regulate it as we do with other forms of advertising? Or let it run wild until there is public pushback? Will we have a way to shut down all AR ads in our lived environment? Much like we do now on the Web with Ad Blockers – though they’re not entirely effective. We delude ourselves if we think there are here easy answers here.

Our lived environment in the future could look like suburbia where billboards and brightly lit signs are largely forbidden. Or it could look like a digital version of Times Square or Las Vegas, where multistory signage is everywhere. We’ll probably end up with some sort of compromise – the question is how.

Enjoy the virtual figures around the Coke cans this month. We’re in an era of what we might call (for lack of a better phrase) – our AR innocence. Coca-Cola’s AR marketing experiment is an incredibly creative project, even as it pushes us further down a path to some fascinating dilemmas.

Oculus Connect 6 – The Next Chapte