We saw an early model of Clip 2 at SXSW this year and video wasn’t part of the package, but adding video and audio recording is an obvious game-changer.

We’ve been using the first Narrative Clip since it shipped as a Kickstarter project back in 2014. In fact, we have a collection of them that we’ve used in higher education projects.

Lifelogging is a fascinating idea. You capture images unintentionally, every 30 seconds throughout the day, a kind of time-lapse photography of your life. The images are later uploaded to the Web, automatically sorted into “Moments” as a visual record of your daily experience.

You get an incredible amount of images, many of which are worthless, and between them, priceless moments that you would have never captured using your smartphone. Looking at these streams presents an opportunity for reflection to better understand yourself as well as those around you.

It has tremendous potential for innovative learning experiences and just for your daily life.

Why photograph what you can google?

There’s another aspect that comes into play here. So often, we are just taking photos of things that are readily available online. I see this every day with tourists as I pass through Grand Central Terminal in New York.

Why not just enjoy the experience and have photos of the unexpected and accidental? A quote on the Narrative site sums it up:

Coming home from a trip, I often find myself with pictures I could just have googled. I feel I often miss (documenting) the nice, small moments in ordinary life. I’d rather have one picture of that nice alley we passed in Paris, than five of the Eiffel Tower. – Ulrika, 25

And now, the Narrative Clip 2 expands on this idea with full 1080p video.

Tap the Clip 2 and you’ll have ten seconds of video along with your photos. And the new version does WiFi so you no longer need to plug it into your laptop.

This changes the dynamic a little in that video has to be an intentional decision. Still, you’re already wearing the Narrative Clip so it becomes incredibly easy.

And you have extra flexibility in that a bluetooth connection with your Smartphone gives you remote control and the option for longer videos.

Of course, life-logging through video recording – even if it was short segments taken every minute – is not possible. We’re just not there yet in terms of storage space and battery life. You can do it, but the device would be larger than the Narrative Clip.

Which defeats what’s best about Narrative. It really is a wear it and forget it kind of device. You stop thinking about it and just live your life.

But you can see where this is going – we will eventually reach the point when video lifelogging becomes an option. Our lives will be streams of digital downloads captured by multiple devices. The next step for the Quantified Self movement is to become less intentional and more connected.

A new geography of the mind

We’re already awash in a tsunami of images and video. This is just the beginning of what’s to come. Which is why the new Narrative Clip is both innovative and fascinating.

We’re headed into a strange new geography of our relationship to the world and ourselves that humans have never explored before – visually documenting everything.

Those that invented photography in the early 19th century, Niépce, Daguerre, Talbot and others would be dumbfounded in the direction we’re headed. The art of the photograph is now less significant than the art of the moment. 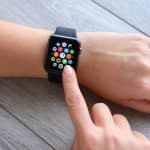 Wearable Market Explodes – And It&